Let’s quickly look at the effect the CPU has on battery life. We run Mobile Mark 2005 Productivity test which simulates a typical office environment of MS Office, web browsing, and complete with pauses in-between tasks. Battery Eater Pro is a ruthless battery drain that loads the CPU and graphics to 100% to depletes the battery in the quickest time possible.

The platform we are using to test the T7400 doesn’t support all the new power features of the CPU, so the following battery benchmarks should be taken with a grain of salt.  With an updated BIOS from Asus we are going to be re-running these tests to get more accurate results. 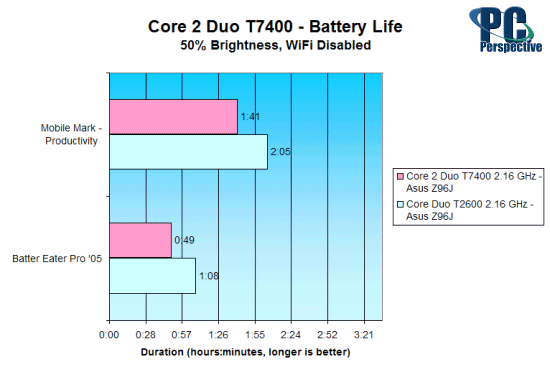 Something ain’t right with the above results since we know that the new T7400 Merom CPUs should have better (or nearly equal) power consumption than the older Core Duo Yonahs. We are awaiting more details about power consumption since it’s something that is, perhaps, more important than the performance numbers. We will report more as we hear it.

In our testing, the Intel Core 2 Duo T7400 mobile CPU has some significant improvements over the previous Core Duo processor. The biggest gains are seen in floating point and integer operations where some tests showed improvements of more than double! One of the short-comings of the Core Duo was it’s weakness in crunching numbers, but no longer. The Core 2 Duo T7400 has shown itself to be a beast when it comes to chowing down those operations.

Memory performance also showed significant gains, but not on the same scale as the CPU’s ability to do math operations. Thanks to a 4MB cache and smart memory access, most of our memory tests showed a nice jump.  Other applications had smaller, but noticeable gains including our media tests and gaming.

Intel has an excellent track record of making new products available to the consumer shortly after a launch (the X6800 Core 2 Duo CPU that was launched just over 1 week ago is available on PriceGrabber). Unlike the Core 2 Duos for the desktop, you will probably have to wait a little longer for laptops to start showing up with the new CPUs as vendors start transitioning over their product lines. The first Core Duo laptops were widely available roughly 1 month after launch, so I would expect the same for the Core 2 Duo.

Unlike the desktop brother, the mobile Core 2 Duo does not show a massive, across-the-board leap in performance. Rather, the mobile Core 2 Duo takes a step (not a leap) forward when it comes to general system performance improvement. The big improvement is in its number crunching ability which was something sorely missed on the original Core Duo. Not to be forgotten is the larger 4MB cache, and finally 64-bit processing on an Intel Centrino laptop!

But how do you improve on an excellent mobile chip anyway? Unlike the desktop CPUs where there was a lot of room for improvement, Intel’s mobile CPUs were in excellent shape already. Though the jump in performance isn’t as massive as the desktop Core 2 Duo, the improvements Intel has put into their new laptop processors is significant and maintains their dominance in the mobile space.

Please Digg This story to share it with others!

The Intel Core 2 Duo T7400 will be available at your favorite retailer soon enough, but in the meantime there are some great deals on T2400 to T2600 Core Duo CPUs. Use our handy PriceGrabber service to find the lowest price including shipping!

Farewell Q6600, we barely got to know you