Utterly ridiculous.  That’s about all I could say when looking at this graph for the first time.  What a change an architecture makes!  The Core 2 Duo E6700 system, under a full CPU load, pulls 164 watts; the same power an idle system pulls when running the Pentium XE 965 or AMD FX-62 processor.  When looking at what the two flagships from Intel and AMD are pulling, the once dominant AMD processors now look like the power hogs.  With the X6800 system pulling 182 watts versus the FX-62 system pulling 256 watts (that’s a 40% difference) the Core 2 Duo is going to run cooler and quieter than the Athlon FX.

With Core 2 Duo officialy upon us, I can’t help but be impressed.  Though I have seen and played with all the newest hardware over the past 6 years, this new processor architecture is in many ways the most dramatic shift.  AMD was on the top of the hill, completely dominating the enthusiast market in terms of raw performance and power consumption for nearly 4 years.  In one swoop, Intel has taken over that hill top with a single processor launch.

Another area where Intel’s Pentium processor lineup had a disadvantage in the enthusiast market was in chipset support.  Intel made very solid chipsets, but they weren’t known for catering to the end-user that wanted to tweak their systems or overclock.  NVIDIA and ATI were spending most of their time developing chipsets for AMD processors as that is where the majority of enthusiasts were going.  Now that Intel is going to be the CPU leader for the time being, the chipset landscape is already changing shape. 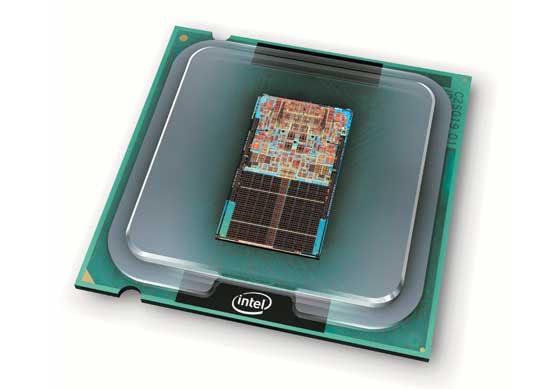 NVIDIA is readying their nForce 590 SLI Intel Edition chipset for launch later this month that promises to bring SLI gaming and a great feature set to gamers that choose to go with Conroe as their desktop CPU.  The chipset is nearly ready, and we already did some preliminary testing with it a couple weeks ago with a Conroe processor that showed it as stable and performing very well.  The chipset should be along in about two weeks from vendors like ECS, DFI and Asus with some impressive options.

ATI is also working on their chipset for Conroe support, but as of this time, we haven’t heard about any launch dates.

Though the CPUs aren’t for sale yet, Intel has claimed that they will be readily available on the launch day of July 27th, with e-tailers like Newegg having parts online by August 7th.  That is a reasonable time frame for a CPU introduction.  Availability is always a question too, but Intel has been saying for a year that their process technology is ramped up accordingly for Conroe’s introduction to the world.

What about pricing?  Well, the E6700 we tested here, that bests the FX-62 that is currently selling for over $1000, has a predicted price of $530; nearly half the price!!  If Intel sticks with that price, and AMD doesn’t drastically lower theirs, the Core 2 Duo line up is going to tear AMD apart.  The Core 2 Duo X6800 part is set to be priced at $999 and isn’t a bargain by any stretch; though compared to the FX-62 CPU from AMD, its obvious the X6800 holds the edge you are willing to spend $1K for the top processor.

Conroe is here and it’s exactly as Intel promised; great performance, low power consumption and wide range of prices for different performance levels.  There is a new king on the enthusiast block and AMD won’t have an answer until at least the end of the year.  Core 2 Duo is the success that Intel needed to work their way back into enthusiast’s hearts and wallets.