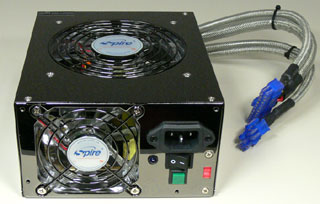 The efficiency of a power supply is defined by the power output divided by the power input and is usually expressed as a percentage.  If a PSU were a 100% efficient (which none are) 400 watts of AC power going in would result in 400 watts of DC power coming out.  In the real world there are always inefficiencies and power is lost in the form of heat during the conversion process.

I measured the AC power input to the Spire SP-500W power supply with the WattsUp? Pro watt meter and calculated the combined DC power output by summing the products of all the DC outputs (volts x amps) for five different DC loads.

The overall efficiency of the Spire SP-500W power supply was good (by old standards), and easily exceeded the ATX design requirements but fell short of meeting the new recommended 80% efficiency mark.

Thermocouples were placed at the air inlet and exhaust outlets of the power supply.  The ambient room air temperature was 23ÂºC (74ÂºF) +/- 0.5ÂºC during testing.

Sound pressure level readings were taken 3′ behind the PSU in an otherwise quiet room.  The power supply was placed on a foam rubber mouse pad during testing.  The ambient noise level was ~30 dBA.

The SpirePower SP-500W power supply was very quiet while operating under light loads.  The rear 80mm fan runs at a constant low speed at all times and the 120mm fan only turns on or speeds up when temperatures inside the power supply increase.  At higher loads, the 120mm fan became audible.  When the 120mm fan was forced on at full speed with the green button on the rear panel, the sound level measured 3′ away was 47.8 dBA.

One thing I noticed was that the 120mm fan speed appears to ‘hunt’ continuously at the higher loads (speed up, slow down) and never really reached a constant steady state speed.  This could become annoying at certain power levels.

Still down with the ACC 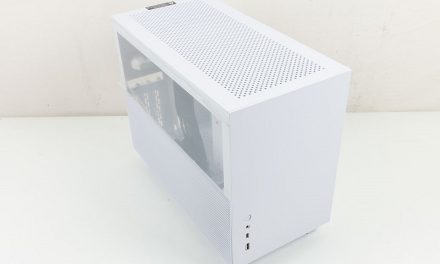 Like Sharp Clean Lines On Your Case? Check The Lian Li Q58