In our previous articles looking at the Core 2 Duo mobile CPU, we took a close look at the battery performance. While the newer BIOS helped improve the battery life when using the T7400 CPU, it did not give it enough juice to pass the older Core Duo T2600.

So with this new Core 2 Duo T7600 sample, have things improved? The answer is a resounding YES!

To test battery life we run Mobile Mark 2005 and Battery Eater Pro which are both very different battery tests. Mobile Mark 2005 mimics a typical office environment complete with application switching, pauses, and dialog boxes. This kind of work load is light on the system. In the end, Mobile Mark gives an overall score in terms of how much work was done during the time the battery had a charge and reports how long the battery lasted.

Battery Eater Pro on the other hand loads the system 100% in terms of graphics, CPU, and hard drive access. The intention is to see how quickly the battery can be drained. This test measures the efficiency of components at consuming power.

In all cases power saving features, and wireless are disabled (i.e. no screen savers and devices do not turn off when idle). LCD Brightness at 50%. 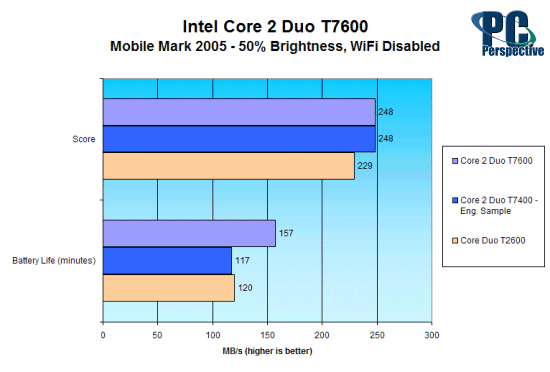 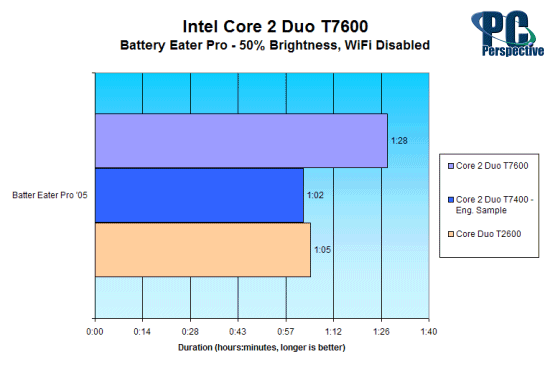 Absolutely incredible! The latest Core 2 Duo mobile CPU we’re testing is showing us a drastic improvement in battery life on the magnitude of 34% to 40% compared to the life of the T7400 CPU. This has profound significance to products being launched during this cycle! Imagine a 17″ gaming laptop capable of 2.5 hours of gameplay while unplugged? How about a 12.1″ ultra-portable running 4-5 hours straight on a standard 6-cell unit? I can’t wait to test some Core 2 Duo laptops!

Measuring the power consumption of the Asus W96JS laptop from the wall outlet, we take the average energy consumed while performing various tasks. 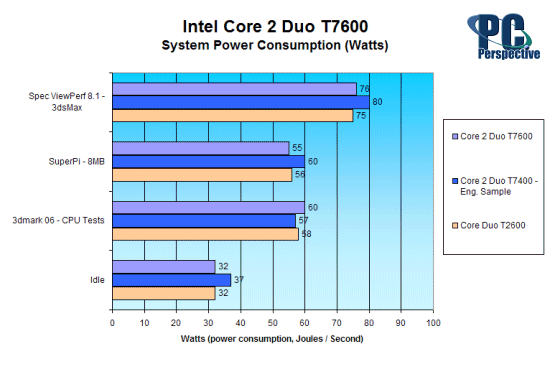 Heat
To measure the heat put out by the T7600 CPU, we take measurements using the CPU’s internal thermal diode and by attaching a temperature probe to the top of the processor’s heatpipe. 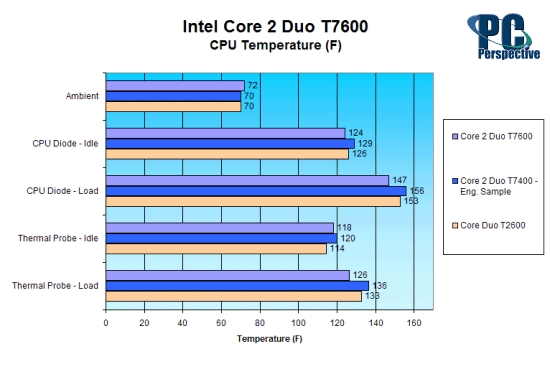 Intel’s production of the mobile Core 2 Duo CPUs has definitely improved quite a bit! The T7600 performs much cooler than the T7400 Engineering Sample and slightly cooler than the Core Duo T2600, but that would be because of the cooler ambient temperature. 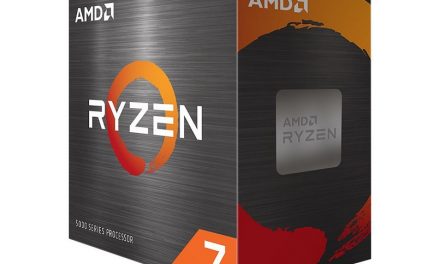