Update (8/10/06): Several people noted to me that I didn’t include power consumption numbers in our Quad SLI evaluation.  Well, that was our mistake, as I had measured them and graphed them before the article went live, I just forgot to post the results!

You can see here that the Quad SLI system does use more power than any other system we have tested thus far, though not by much considering we are seeing four GPUs at work instead of two in the 7900 GTX SLI configuration.  Approaching 400 watts of real power consumption is quite dramatic and I think you’ll find that the NEXT generation of graphics cards will be even more power hungry.

After many hours of game playing and testing, I came away from Quad SLI impressed, but maybe not as much as I had initially expected.  Let’s go over how each game played and “felt” individually to see why that might be the case.

While the game has a frame lock of 100 FPS (yes I know it is possible to disable, but most users will not do so), the performance differences between the 7900 GTX SLI and Quad SLI setups were pretty dramatic.  Playing at the full resolution of 2560×1600 on the Dell 30″ monitor was not only possible, but very enjoyable.  But then again, this was the case with the single 7950 GX2 card as well, running at 4xAA in-game settings rather than the 8xSLIAA settings that both SLI configurations were running.  In Battlefield 2, with very large landscapes, aliasing is a big issue and can be very noticeable with no AA enabled.  While playing I could tell that the 8xSLIAA produced a better picture; having a 30″ screen only inches from your face will do that.  That being said, 4xAA wasn’t bad by any means, so running the game with a single card would be just as enjoyable.

CoD2 is a heavy hitting game on graphics performance, and our 2560×1600 results were less than impressive and playing at that level wasn’t really possible.  Though the results weren’t shown, playing at 1920×1200 on the 30″ was damn fun, and had slightly better performance than all the results we saw on the 2048×1536 resolution.  CoD2 is another game where aliasing is very noticeable with smoke grenades and explosions creating debris constantly through out the game making good AA a must have for an enjoyable game playing experience.  Again, I found that the 8xSLIAA the Quad SLI and 7900 GTX SLI configurations ran at to be better quality than the in-game 4xAA setting that the single 7950 GX2 card was set at.  Couple that with the fact that the game play performance wasn’t decremented at all on the Quad SLI system with the better image quality, Quad SLI definitely has the advantage, though not as dramatic of one as in other titles.

FEAR was the one D3D game where NVIDIA was able to find a way to get around the “D3D limitation” and really fully utilize the four GPUs in the Quad SLI setup.  Playing at 2560×1600 was still a stretch, but 2048×1536 was only playable on the Quad SLI system with average frame rates well above either of the other configurations.  The in-game image quality settings were used for all three setups and as such the IQ was identical across the board with the Quad SLI system having a significant performance lead making the game much more fun.  The difference between minimums at 39 and 23 is very noticeable in gameplay. 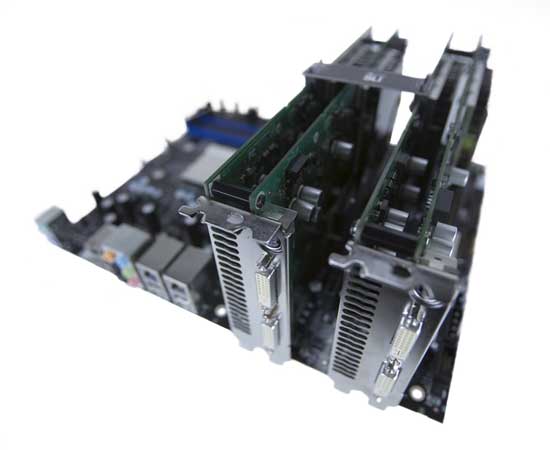 Lost Coast falls in the same category as BF2 and CoD2, requing the use of 8xSLIAA to see an advantage to Quad SLI technology.  This game actually does a better job though, as the performance differences from the overhead of 8xSLIAA are basically nil, leaving only the better image quality on the 8xSLIAA compared to the 4xAA in-game settings.  2560×1600 still wasn’t a playable option though, and running at 2048×1536 or 1920×1200 would be the optimal playing conditions.

Seeing the Doom 3 engine at 2560×1600 was damn impressive and being able to play at that resolution with 4xAA and 8xAF enabled was even more so.  The single 7950 GX2 was not able to keep up, coming in at less than half the speed while the 7900 GTX SLI configuration made a better stab.  There was no doubt though that the Quad SLI configured system was more fun than the others to play on, with high frame rates the entire time.  OpenGL games, it would seem, are going to see the immediate gains from Quad SLI; all of the Doom 3 games should be at the top of any Quad SLI gamer’s list.

Obviously one of the most frustrating things about Quad SLI is this limitation of buffers in the DX9-based games.  It is forcing users to look for image quality enhancements with their Quad SLI configurations rather than performance enhancements — and users should be able to make that choice for themselves.  As I mentioned above, while playing at 8xSLIAA is definitely better than playing with 4xAA in terms of image quality, I think most users would rather have the option of playing at another resolution higher with 4xAA enabled if they had that option.  I know I would.  NVIDIA has stated they are working on finding ways around the limitation for other major titles, much like they did with FEAR, but I don’t know how many NVIDIA’s team is going to be able to come up with.  DX10 will fix the issue, but titles based on it probably won’t be around until mid-2007 at the earliest.  OpenGL looks nicer now though, doesn’t it?  Doom 3, Quake 4 and Prey are definitely games that look impressive on a Quad SLI setup.

Wow, what can you say?  When the IQ is jacked up and the resolution high (at least 1920×1200, preferrably at 2560×1600), it is a fantastic experience playing on a screen this size this close up.  While playing Day of Defeat: Source with some friends over the weekend, I actually had to move my head to look up into corners of the screen!  While this might be annoying at first, it makes the game much more realistic (at least to me) and you always have the option of moving back a little bit.  Friends that were able to see it were also impressed to see DoD:S running at 2560×1600 with 4xAA and 8xAF enabled with frame rates over 50 constantly.

These monitors are definitely expensive, with the Dell 30″ starting at $1800+ and the Apple 30″ Cinema Display is available for just under $2000.  But gamers looking for a Quad SLI configuration are likely to be those with expensive tastes.  But you really do need a monitor with a resolution higher than 1600×1200 in order to even be able to take advantage of the performance benefits of Quad SLI.

Don’t forget the 7950 GX2 cards, particularly the BFG Technologies model and the XFX model.  Two of them.  That brings our rough estimate up to ~$2175 for components and ~$4175 including the monitor.  But of course, you can save the second 7950 GX2 purchase for down the road and save $600 on your initial purchase.

Quad SLI is a gamer’s dream and is able to bring the highest possible image quality along with the highest resolutions on all of today’s major titles.  Yes, as of now, there are some limitations that need to be worked out, either with NVIDIA’s diligence or time.  If you want the absolute fastest gaming system, building one with Quad SLI at the core is where you need to start!  Ladies and gentlemen, start your check books!

If you found this review interesting, please give it a Digg to share it with others!

Be sure to use our price checking engine to find the best prices on the components used in our Quad SLI system, and anything else you may want to buy! 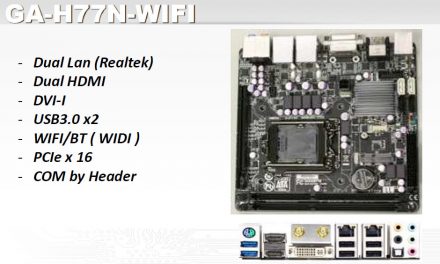