First we’ll take a look at the ECS KA3-MVP, as it was the first to reach our test bed.  ECS (Elitegroup) has been making strides to enter and gain a foot hold in the enthusiast market starting with their nForce-based motherboards, the KN1 Extreme (reviewed in April 2005) and the KN1 SLI Extreme (reviewed August 2005). 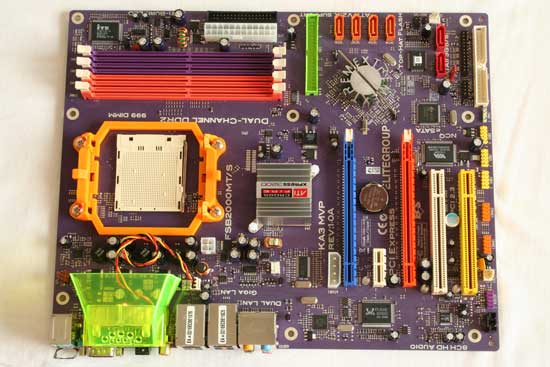 The KA3-MVP follows the familiar trend with ECS motherboards of sporting a purple-ish color PCB and oddly colored exspansion slots.  So, you have blue, orange, yellow and white slots along with pink and purple DIMM slots….okay.  This, of course, doesn’t affect performance or stability at all, so we here at PC Perspective just shake our heads and move on to the meat of the matter. 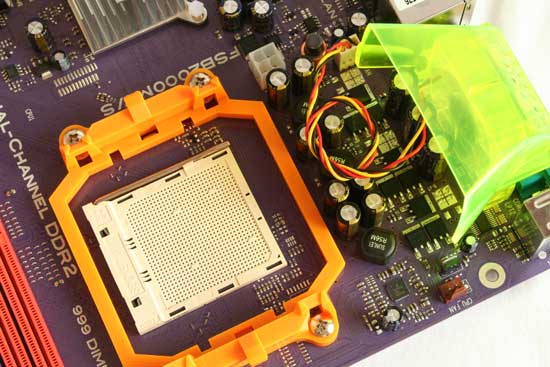 Starting at the processor socket, the ECS KA3-MVP appears to be a standard AM2 motherboard with the standard heatsink mount as required by AMD.  The spacing around the socket is a bit more cramped than we would like to see with the capacitors to the right (in the above image) a bit taller than the mounting brace and very close the edge of it.  You can see the 4-pin ATX power connector below the processor socket as well; it might also be hard to get to with the heatsink installed.

The exhaust fan and duct you see here (the bright translucent-green thing) is to help cool both your processor and the MOSFETs that sit between the CPU and the external connectors. 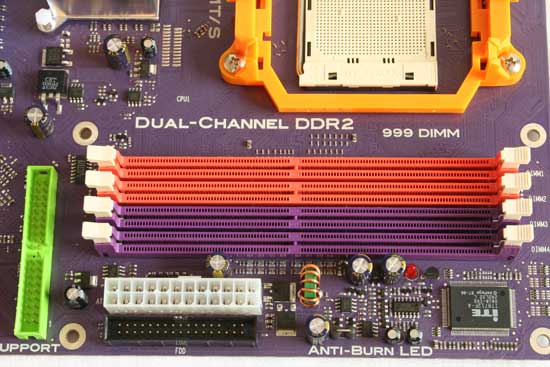 The DIMM slots on the ECS KA3-MVP are an odd pink and purple color, without a clear indication of which are attached to which memory channel.  In most boards we have reviewed recently, each color indicates a different channel and thus you would place one of your two memory modules in the first pink slot and one in the first purple slot.  That is not the case here though, as I found when noticing the BIOS post screen said I was only running in single channel memory mode — ECS put the first slot of channel 1 in the first DIMM slot and the first slot of channel 2 in the second DIMM slot.  While this is not really a problem exactly, the fact these DIMM slots are too tightly packed in my opinion, causing contact between modules with heatsinks, you are forced to keep your modules touching in order to run in dual channel mode (which you should obviously do).

Other items featured in this picture are the 24-pin ATX power connector up against the floppy channel connector and the primary IDE channel in green. 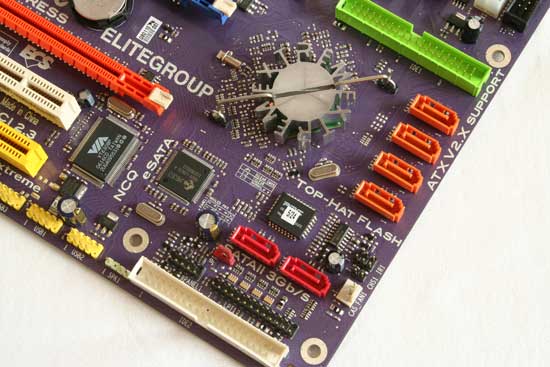 Looking at the storage and peripheral section of the motherboard, the ECS KA3-MVP sports a total of 6 SATA channels — four from the ATI SB600 south bridge and two from the JMicrom JMB363 chip included.  There is also a second IDE channel here for a total of 4 supported IDE devices on the board.  The south bridge runs very cool, as we noted in our first look at the chipset, and as such ECS uses a very small, low profile heatsink. 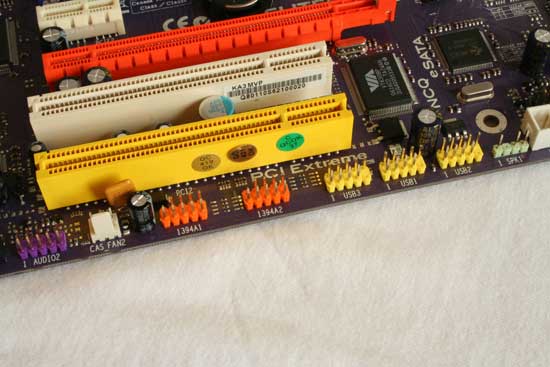 Also at the bottom of the KA3-MVP board we see the complete header output capability for expansion.  There are two FireWire and three USB 2.0 connections here to max out the boards options. 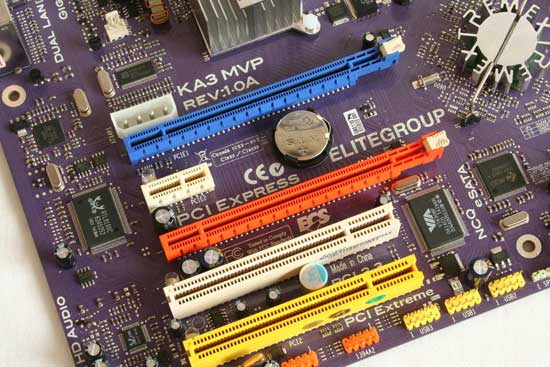 The expansion slots on the KA3-MVP motherboard, besides being colorful, offers the user support for CrossFire multi-GPU technology with two full x16 PCI Express slots.  There are also two legacy PCI slots and a single x1 PCIe slot as well.  The bad part here is that if you DO use CrossFire video cards with dual-slot GPU coolers, then you are essentially left with a single PCI slot (the bottom yellow one) and that’s it. 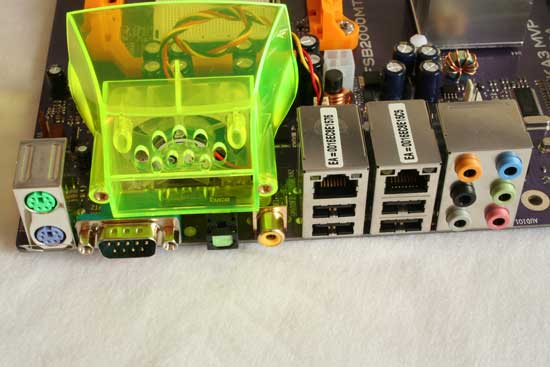 The back panel connectors on the ECS KA3-MVP board sport the standard PS/2 connections as well as a legacy serial connection.  There are two network connections (one Gigabit, the other is only 10/100), four USB 2.0 channels, optical and coaxial audio output and 8-channel analog audio outputs as well. 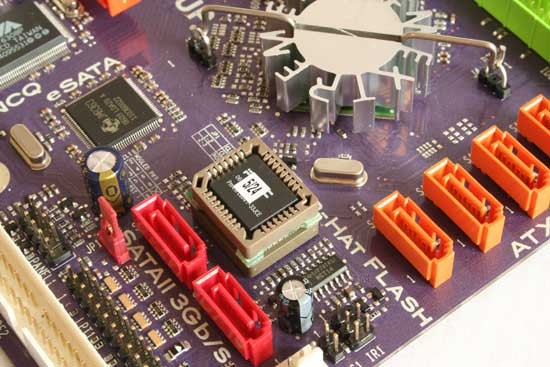 Finally, one of the more unique features on the ECS motherboards is the inclusion of a “top-hat BIOS” tool that allows you to recover your system in the event of a bad BIOS flash.  You can see in this image that the device is really another BIOS chip sitting on top of the original one that is then copied over by the original.  Essentially, ECS is including an extra BIOS chip for users to have for a “just-in-case” scenario.  Props to ECS for this feature!