Neither of these motherboards are really geared towards the “gotta-have-it-all” enthusiast and as such the included extras and features on them are not extravagent. 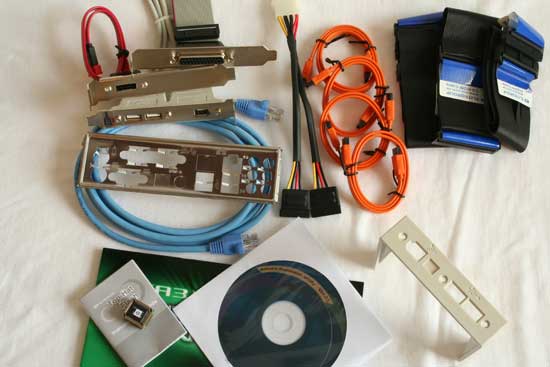 Here we see what you get in the box with the ECS KA3 MVP motherboard.  ECS gives users four regular SATA cables, and one external SATA adaptor that can be used with the JMicron chipset SATA connections.  A SATA power adaptor, floppy cable and two IDE cables are also included.  ECS even includes a VERY legacy printer port adaptor (LPT) as well as a dongle that adds two USB and one FireWire connection to the system.

The other extras include the BIOS TopHat unit that allows users to recover from a bad BIOS flash and a 6-foot network cable too.  That plastic piece to the right can be used to move the USB and FireWire dongle in an empty 3.5″ bay on your case if you’d like. 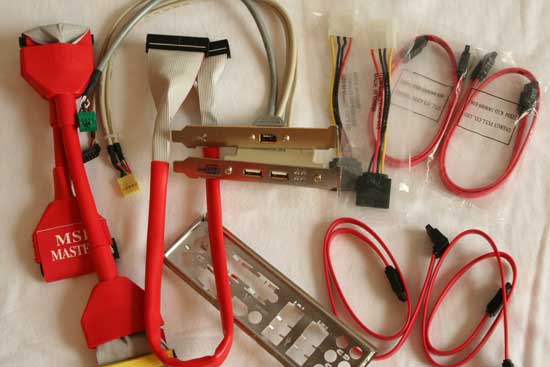 MSI’s package actually includes even less than that.  There is a single IDE cable and floppy cable, both rounded for you for better air movement and easier installation.  There are four SATA cables and two SATA power adaptors.  The two dongles include one for a single FireWire connection and one for two additional USB ports.  It makes much more sense to have both of these on a single dongle, as it would only take up one additional space on the back of the case.

In all, neither setup is really impressive as far as the in-box extras are concerned, but for many users, that may not be an issue at all.  If you just need a board that works, move on past this page.