ATI and Stanford are bringing massive Folding@Home power to your ATI X1900 and X1950 GPUs; oh and the Sony Playstation 3 as well.

If you have been involved in the hardware community for any length of time, you have no doubt heard of something called Folding @ Home.  Many tech communities have “Folding teams” and there is a good chance you are already involved in one if you are reading this.  Folding, in its most basic definition as we use it, is when you use your computer’s spare processor cycles (when you are idle or away) to compute proteins and help in the scientific data collection need to find cures for some of the world’s most debilitating diseases.

What is significant about today’s announcement is the introduction of Stanford’s new Petaflop Initiative that is attempting to drasticlly increase the amount of work that can be done on current processing technology.  Both Sony’s Playstation 3 hardware and ATI’s latest GPUs (which we’ll talk about on the next page) are ready to use their specific hardware advantages to help society and science.

What is Folding @ Home?

As seen in the Stanford FAQ (http://folding.stanford.edu/science.html)

Proteins are necklaces of amino acids — long chain molecules. Proteins are the basis of how biology gets things done. As enzymes, they are the driving force behind all of the biochemical reactions which make biology work. As structural elements, they are the main constituent of our bones, muscles, hair, skin and blood vessels. As antibodies, they recognize invading elements and allow the immune system to get rid of the unwanted invaders. For these reasons, scientists have sequenced the human genome — the blueprint for all of the proteins in biology — but how can we understand what these proteins do and how they work?

RELATIONSHIP TO THE HUMAN GENOME PROJECT

Since proteins play such fundamental roles in biology, scientists have sequenced the human genome. The genome is in a sense a “blueprint” for these proteins — the genome contains the DNA code which specifies the sequence of the amino acids beads along the protein “necklace.” 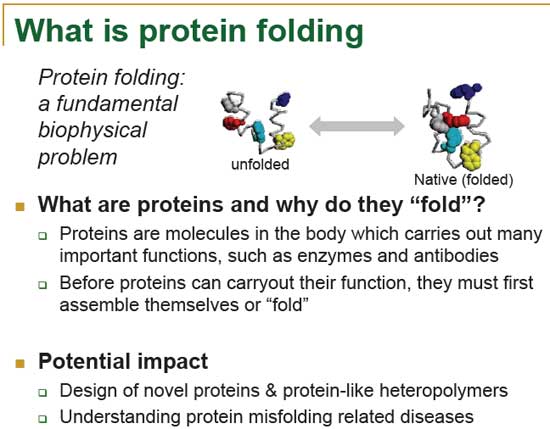 WHY DO PROTEINS “FOLD”?

However, only knowing this sequence tells us little about what the protein does and how it does it. In order to carry out their function (eg as enzymes or antibodies), they must take on a particular shape, also known as a “fold.” Thus, proteins are truly amazing machines: before they do their work, they assemble themselves! This self-assembly is called “folding.”

One of our project goals is to simulate protein folding in order to understand how proteins fold so quickly and reliably, and to learn how to make synthetic polymers with these properties. Movies of the results of some of these simulation results can be found here. 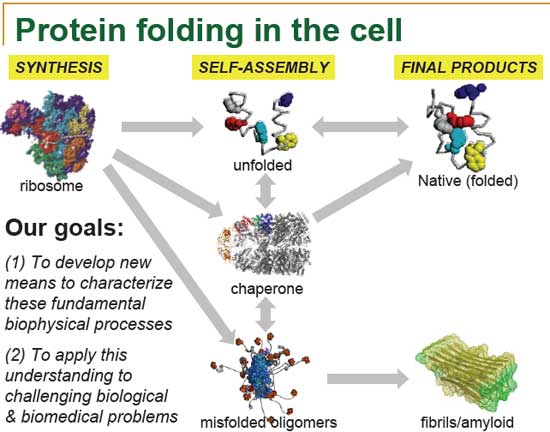 What happens if proteins don’t fold correctly? Diseases such as Alzheimer’s disease, cystic fibrosis, BSE (Mad Cow disease), an inherited form of emphysema, and even many cancers are believed to result from protein misfolding.

When proteins misfold, they can clump together (“aggregate”). These clumps can often gather in the brain, where they are believed to cause the symptoms of Mad Cow or Alzheimer’s disease. 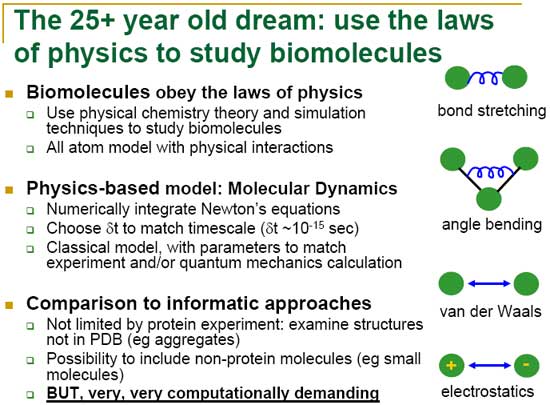 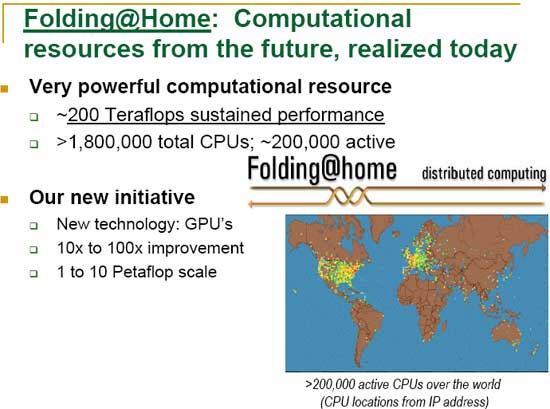 WHAT HAVE WE DONE SO FAR AND WHERE ARE WE GOING?

Folding@Home has been a success. We have folded several small, fast folding proteins, with experimental validation of our method. We are now working to further develop our method, and to apply it to more complex and interesting proteins and protein folding and misfolding questions.

Since then, Folding@Home has studied more complex proteins, reporting on the folding of many proteins on the microsecond timescale, including BBA5, the villin headpiece, Trp Cage, among others.

More recently, we have been putting a great deal of effort into studying proteins relevant for diseases, such as Alzheimer’s, Hunntington’s, and Osteogenesis Imperfecta.

You can learn more about our results, on our Results Page and you can see specific , peer-reviewed scientific achievements on our Papers Page.

Of course, if I wrote this article on the Stanford Folding project and didn’t mention our own, very successful Folding Team, what kind of site would we be??  The PC Perspective Folding Frogs team has been around since the beginning of our site, way back in 2001, and we are among the most successful group in the Folding @ Home project (we are currently ranked 16th in the world!).  If you are interested in joining, you should visit our dedicated Folding forum, view the FAQ thread we have there, check out our very own folding video and get started!!  We have a fun, community driven team and I am sure you’ll find yourself doing more than just talking about folding in no time!

Next Page – How the GPU Fits in Now