I admit, when I started to write this article I really had no idea what to expect. I’ve read a lot of different opinions on how the two mobile GPUs compare, but never any quantifiable numbers I was happy with. But I think now I can sleep easy at night now that we’ve run through the tests and churned out the numbers.

Second, the PowerMizer settings of Balanced and Power Saving make game playing at preferred settings impossible. So if you’re looking to play games while running on batteries, best to drop details and screen resolution to get something playable … otherwise just occupy your time with Bejewelled or Mine Sweeper (*gasp!*). 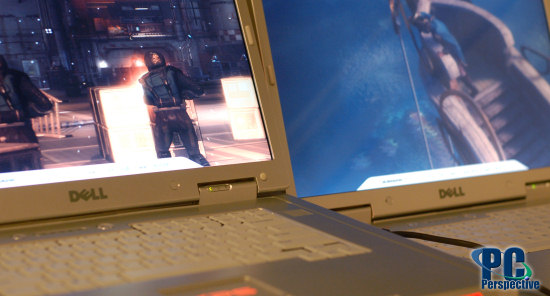 Now the difficult part, which one to get? For the money, the GeForce Go 7900 GS is a superb performer with abilities to churn out incredible frame rates at 1440×900 resolution. It’s not as fast as the GeForce Go 7900 GTX, but you’re saving a bit of money and power (in Performance mode) using this configuration. For gamers or professionals who are on a budget or don’t care too much about gaming at higher resolutions or need rendering at a decent pace, then the GS is a great solution.

The GeForce Go 7900 GTX is a real beast and it has enough headroom to play games at a stunning 1920×1200. This makes the GeForce Go 7900 GTX a better candidate for gaming on larger connected displays than the Go 7900 GS. For mobile gamers who want the fastest or consumers who plan on using their laptop for years to come (i.e. something more “future-proof”), then a laptop with the Go 7900 GTX is the way to go thanks to the extra shader and ALU processors, the 512MB RAM buffer and the higher clock speeds.

Both the GeForce Go 7900 GTX and GeForce Go 7900 GS are superb graphics solutions for the serious mobile gamer who don’t want to compromise on quality and level of detail. These GPUs are available from many different laptop manufacturers including Dell, Toshiba, Alienware, Voodoo, and ROCK.

Please DIGG this article if you found it useful!  Thanks!

Be sure to use our price checking engine to find the best prices on the latest notebooks featuring NVIDIA’s mobile gaming GPUs, and anything else you may want to buy!