Pat Gelsinger used to be the CTO of Intel; and while that position now belongs to Justin Rattner, Pat is still just as involved in the success of the company and you can tell in his presentation. 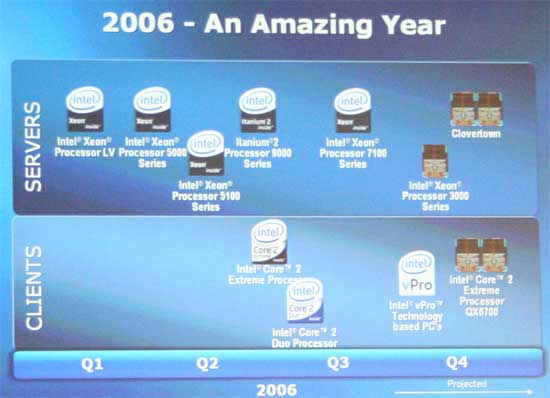 He started off by looking at 2006 as a very successful year for Intel; and it has been since about July.  You’ll notice on the above timeline that there isn’t anything lifted in the desktop segment before the Core 2 Duo product launch.  How quickly we forgetâ€¦  But the current Xeon and Core 2 line ups have been a great success and the Kentsfield QX6700 and Clovertown Xeon core will continue this trend through the end of 2006. 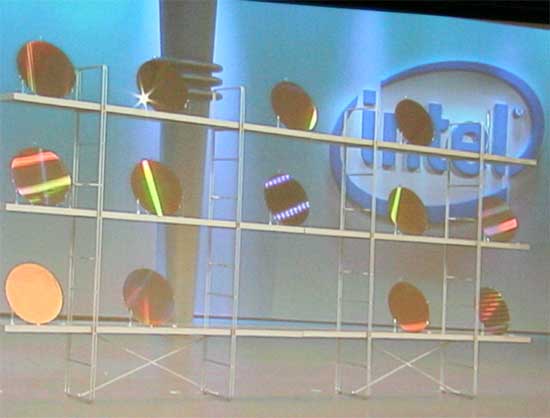 A display of different cores manufactured by Intel during 2006 was displayed on stage as Pat talked about the various parts. 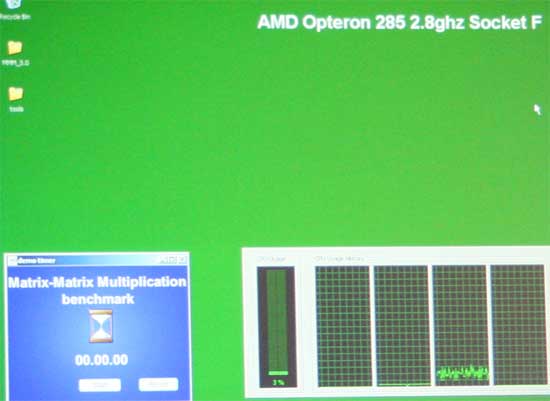 Of course, what would talk like this be without a little friendly competition?  Intel pitted their current dual-core Xeon processors against one of the brand new Opteron 285 running at 2.8 GHz on the new Socket F server platform from AMD.  The benchmark was custom made, and not a standard piece of software, so of course Intel won by a landslide — go figure.  But then the on-stage hand upgraded the server from dual core to quad core Clovertown CPUs and re-ran the tests.  Things didn’t look any better for the green team as you might expect. 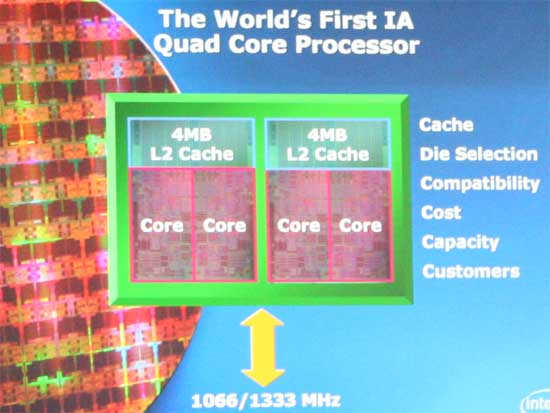 Here Pat discusses the Clovertown core Xeon based on the quad core technology we looked at earlier.  This CPU will essentially be the same thing as the Core 2 Extreme QX6700 desktop unit but the Xeon part has the advantage of a 1333 MHz FSB over the desktop 1066 MHz FSB. 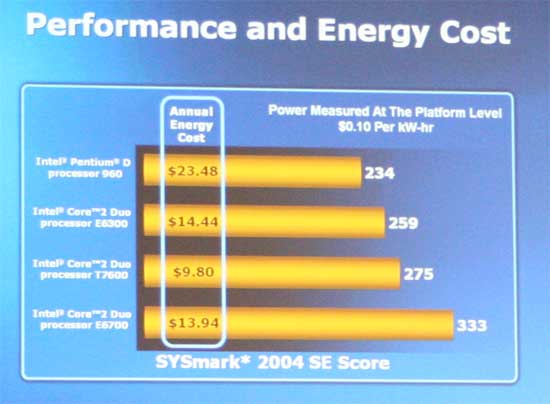 Earlier in the week we told you that Intel was working on a way to measure the performance per watt of a processor and trying to make an industry standard out of it.  You can see our first article from the Fall 2006 IDF to get an idea of exactly how Intel works out the numbers, but the results here are interesting.  Based on an annual cost to run the PC under a typical work load and schedule, the Pentium D 960 processor would cost someone $23.48 for the electric to power the system while a mobile system based on the Core 2 Duo T7600 would cost only $9.80 a year.  That is a 139% decrease in costs and the cheaper system also happens to perform 17.5% better than the Pentium D. 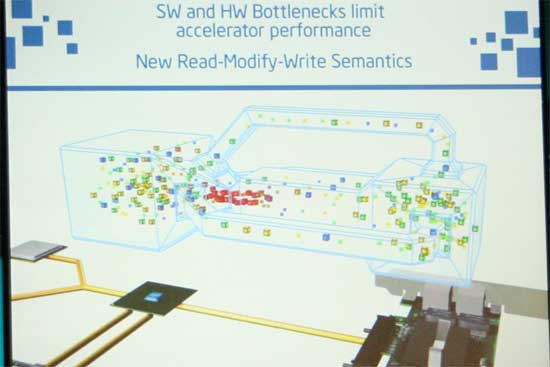 Probably the most interesting information that came up during Pat’s talk was Intel’s opening their FSB to external third party chips.  This is a direct competitor to the AMD Torrennza initiative they announced a few months ago.  The idea is simple: AMD wants to use HyperTransport connectivity to allow other chipset designers to make a product they can plug into an AMD Opteron processor socket to add task-specific performance gains.  You can think of this as a return to the days of co-processors on your motherboard, as the ideas are essentially the same.

Of course, Intel’s method does NOT use HyperTransport or the AMD processor socket (ha!) and so these two initiatives are going to be competitive and create a division between performance ability between the two platforms.  If it is anything like the CrossFire versus SLI debacle, we’ll be left in a quagmire of incompatible parts between that we somehow need to quantify performance differences between.

You might wonder how a FSB that is arguably already overloaded with a quad core processor is going to deal with more processors from this co-processor initiative.  The answer is not very well, and Intel as much as admitted that.  However, they are working on a new technology in PCI Express v2.0 that will allow the connection of these types of co-processing units over a modified PCIe bus.  This is good new for consumers, but not for AMD who of course will either have to choose to adopt that option and lose their advantages in the market or risk alienating potential hardware developers that will only want to develop for a singe platform.  This is going to be interesting going forward into 2007 as AMD finds itself in a very familiar situation. 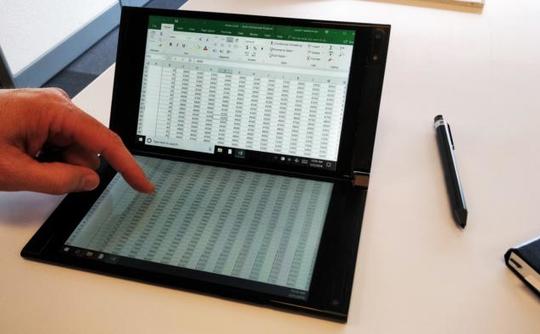