The main tubing supplied with the PC4-1025 liquid cooling system is PVC (vinyl) tubing measuring 3/8′ ID x 1/2″ OD.  Koolance also includes 6′ of 1/4′ ID tubing, which will be needed if multiple waterblock coolers are to be used inside the PC. 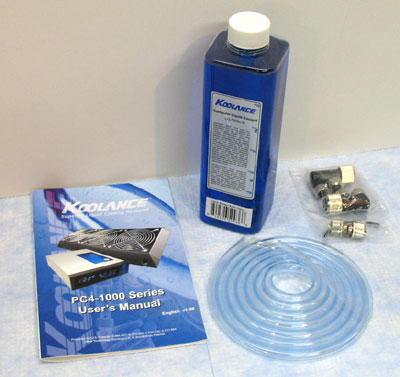 Note: To make assembly easier, I dip the ends of the tubing into hot water to soften them up before pushing them onto the barb fittings.

Koolance supplies their own pre-mixed coolant that comes in a 700 ml bottle.  The MSDS (Material Safety Data Sheet) lists the major ingredients as being (% by weight):

I measured the pH of the coolant to be 8.0, which is optimum for minimizing corrosion.

Caution: The blue Koolance coolant contains antifreeze (Ethylene glycol), which can be toxic to small children and pets if ingested.  Just be careful.

The Koolance CPU-305-V10 cooler is designed to work with 3/8′ ID systems.  Koolance claims it can handle heat sources up to 300 watts. 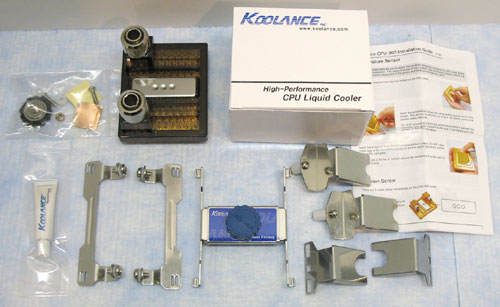 The Koolance CPU-305-V10 cooler incorporates a gold plated copper base and plastic water-jacket.  The wetted surface of the copper base is sculptured with tiny pyramids to increase surface area for better heat transfer while maintaining minimal flow resistance.  The 24k gold plating virtually eliminates the potential for galvanic corrosion, which is very important when using an aluminum radiator and copper waterblock.

The Koolance VID-200-L06 waterblock is a combination GPU and memory cooler for high-end video cards.  It is designed to work with GeForce 7800/GT/GTX, 7900GTX, and Radeon X1800/1900 series cards in AGP, PCI-E, and dual video card configurations.  A complete list of compatible video cards is available on the Koolance website.

At the heart of the VID-200-L06 is a Koolance GPU-180 waterblock that Koolance claims can handle up to 180 watts.  The GPU cooler incorporates a gold plated copper base and plastic water-jacket.  The wetted surface of the copper base is sculptured with pyramids just like the larger CPU cooler to increase surface area for better heat transfer.  And again, the 24k gold plating virtually eliminates the potential for galvanic corrosion. 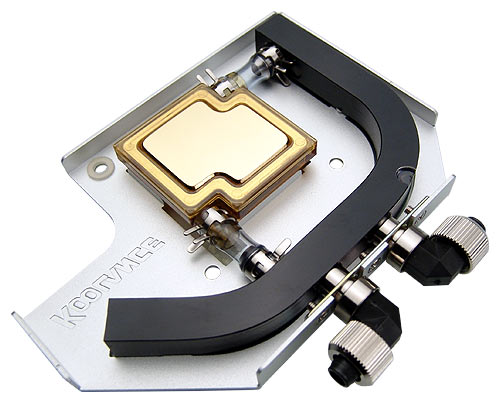 The video RAM chips are cooled by an anodized aluminum block that is separate from the GPU waterblock.  Water enters and exits the cooler thru Â¼’ ID swivel fittings that freely rotate, which allows routing the tubing from any direction.

Prior to installing the waterblocks into the test system I measured the thermal resistance and pressure drop using a thermal die simulator (80 watts CPU, 45 watts GPU) and my custom built waterblock test stand.  Note: Tests were performed on a CPU-300-V10, which is identical to the CPU-305-V10 except the base has a slightly smaller step and a GPU-180-L06 GPU waterblock, less the RAM cooler. 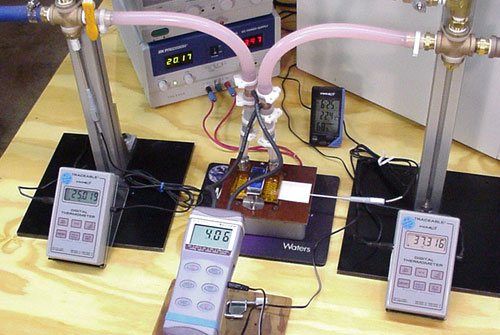 The following graph shows the relationship between thermal resistance (C/W) and pressure drop (DP) for various flow rates for the two Koolance waterblocks. 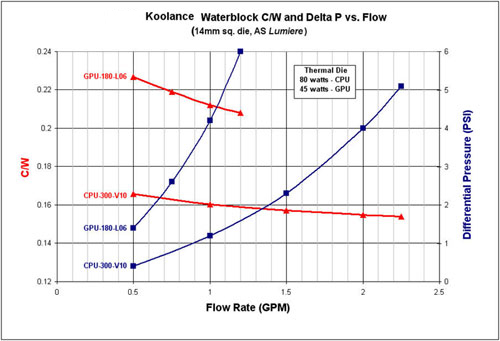 As you can see, the smaller GPU-180-L06 cooler with Â¼’ ID swivel fittings has a much larger flow resistance compared to the Koolance CPU-300-V10 with 3/8′ ID fittings.  The thermal resistance of the larger CPU-300 cooler is quite good and in line with other medium to high performance waterblocks on the market today.

The following two graphs illustrate the relative difference of several waterblocks I have tested. 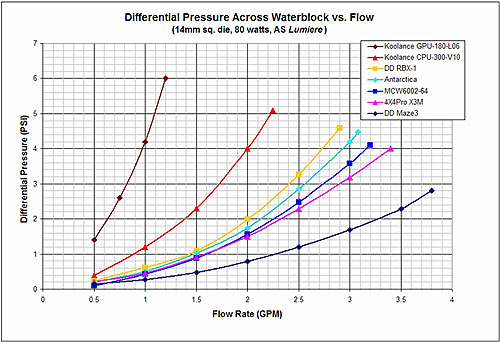 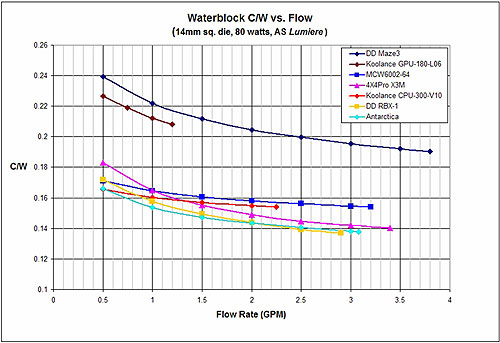 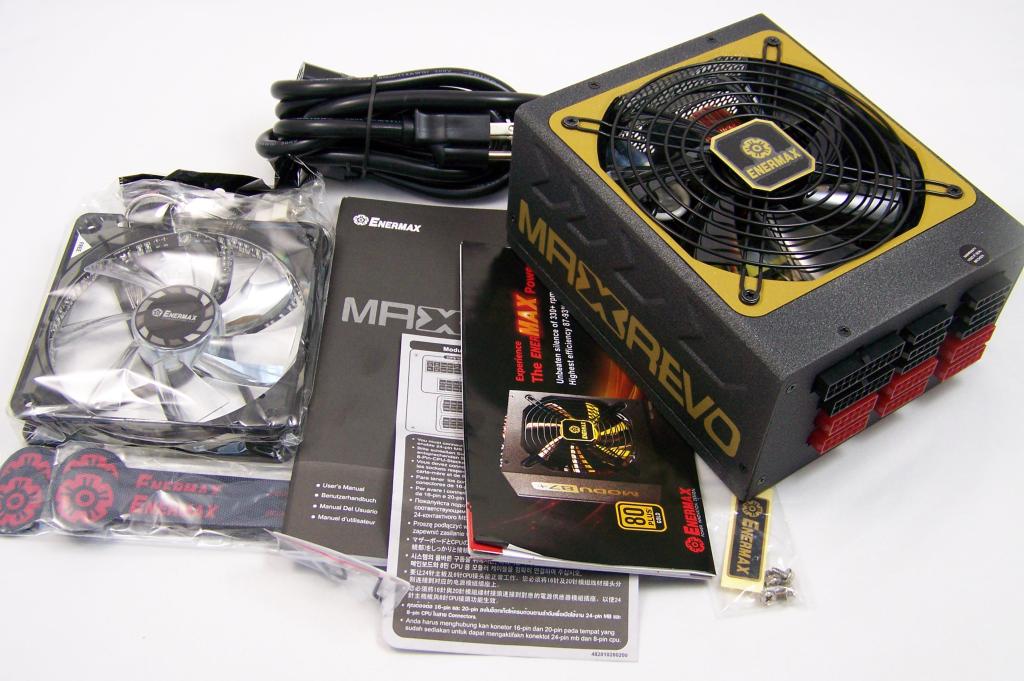 We need more power! 1350W of pure Enermax coming up. 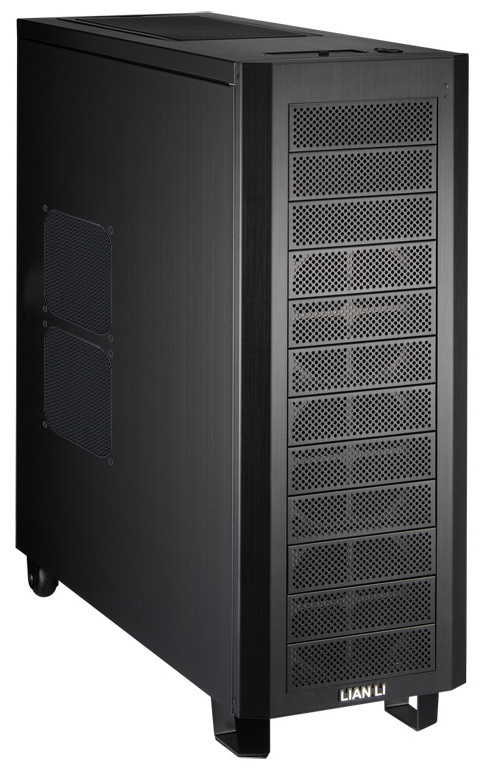