The Koolance PC4-1025 liquid cooling system was tested on a P4 test rig consisting of the components listed below.  The ambient room air temperature was maintained at 23Â°C Â±0.5Â°C.  The CPU was loaded by running multiple instances of CPUBurn and the GPUs were loaded by running 3Dmark06.  The PC4-1025 was tested with the pump running at full speed and the fans running at four different speeds (#10, #7, #4, and #1). 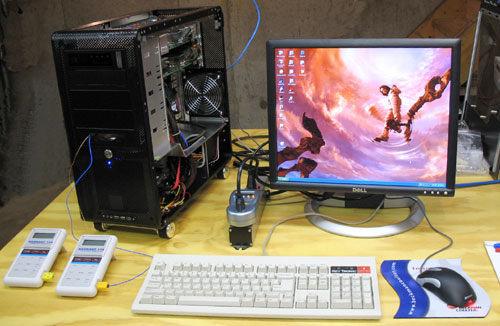 To facilitate taking more accurate CPU temperature measurements, a very small Omega thermocouple was attached to the side of the 955 IHS with Arctic Alumina thermal epoxy.  The measurement equipment used during testing included:

I also used Everest Ultimate Edition 2006 to monitor the various system temperatures, fan speeds, and voltages via the onboard diagnostics hardware.

Prior to testing the PC4-1025 liquid cooling components, the test bed was installed into the Koolance chassis with all the stock air coolers in place.  The system was run through a full series of tests with both case fans operating and the sides on.  The 955 Presler CPU runs very hot with the stock Intel cooler and is typically throttled back during heavy load stress testing.  It should also be noted that the #1 video card (closest to the CPU) runs considerably warmer than the card above it because the HSF cooling it draws warm air off the backside of the #2 card above. 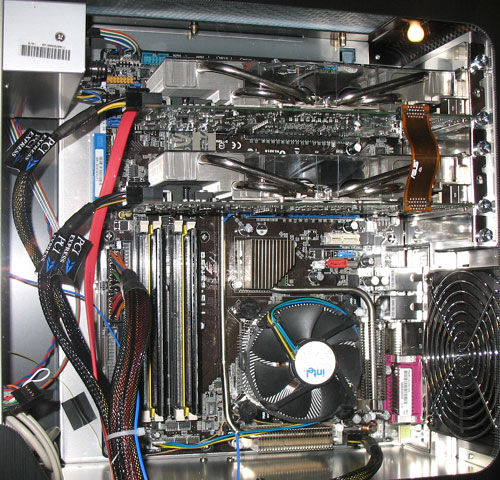 The following data is presented for comparative purposes only.  Your actual results may be different depending on the variables unique to your system (CPU, GPU, overclock, ambient temperature, case air flow, temperature monitoring, etc).

For comparison, I also included the results when using the stock Intel and nVIDIA heatsink fans (HSFs) on the CPU and 7800GTX video cards (highlighted in yellow).  Tests with the stock HSFs were performed in the closed Koolance case, with both case fans running, and no water-cooling.  As you can see, the 955 Presler runs very hot with both cores fully loaded when using the Intel cooler.  We certainly have room for improvement here.  The two 7800GTX video cards also ran warm but within acceptable limits thanks to the huge air-coolers.

As you can see in the following graphs (Everst System Stability Test), loading both Presler cores while using the stock Intel HSF resulted in significant thermal throttling of the CPU; within seconds, the CPU was throttled back to prevent overheating and a dual core meltdown.

Once we made the switch to water, the CPU cores run much cooler, so no thermal throttling is necessary and the processors are able to run at a constant 100% load.

I was very pleased with the overall test results.  The koolance PC4-1025 liquid cooling system did an outstanding job of cooling the red-hot Presler CPU and both 7800GTX video cards.  With the Koolance controller set to Auto, the radiator fans rarely ever sped up, even with all three processors running under a heavy load.  Manually setting the radiator fans on high (#10) dropped the average CPU and video card temperatures even lower.  However, with the three radiator fans running at high speed, the fan noise was quite loud.  Slowing the fans down quickly reduced the noise, and at the lowest setting (#1), the PC4-1025 was relatively quiet and temperatures were still much cooler than when using the stock air-coolers.  The internal pump generates a quiet humming sound, which is only noticeable when the radiator fans are turned down low.  All testing was performed with the pump set on high speed but from the results I see, I would have no hesitation in backing off the pump speed a little if you happen to be particularly sensitive to the soft hum the pump emits.

Arctic Silver is getting pasted by the competition