ATI’s new X1650 XT attempts to one up NVIDIA in the $150 price point of graphics cards after their success with the X1950 Pro card earlier in the month. Does it compete with the popular GeForce 7600 GT?

The second in a pair of new mid-range graphics chip releases from ATI, the new Radeon X1650 XT GPU is aimed at the more casual gamer with a tighter budget on their PC components.  A couple weeks ago AMD/ATI released the Radeon X1950 Pro that impressed us with its performance and pricing.  Will the X1650 XT be able to do the same?  And will AMD be able to keep their pricing and release schedule with the card this time?

As with all of the Radeon 1k-series of graphics cards, the X1650 XT is a simple derivative of ATI’s R580 GPU technology that we saw with the X1900 and X1950 graphics cards. 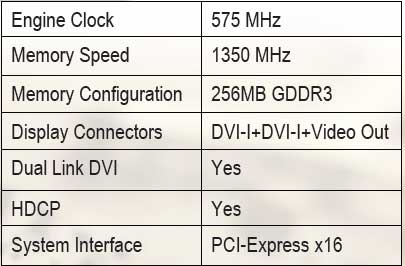 The X1650 XT is set at some fairly high clock speeds, though with fewer active pixel processing pipes, performance is scaled to the $150 segment fairly well.  The X1650 XT will run at 575 MHz core clock and 1.35 GHz memory clock by default and will come with 256MB of GDDR3 memory.  There are still two dual-link DVI connections and a standard video output connection as well.  HDCP support is optional on all third-party cards but AMD claims that all of their Built-by-ATI cards will have HDCP support built into them, making this one of the least expensive HDCP-ready graphics cards on the market. 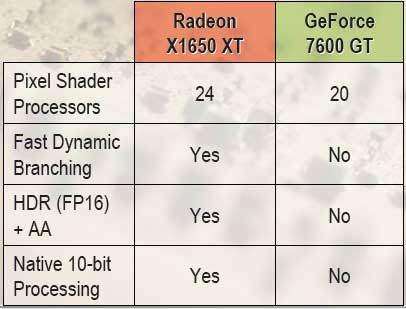 The X1950 XTX, the top flagship card from ATI using the same GPU technology, has 48 total pixel pipes for graphics processing.  The X1950 Pro released earlier this month had 36 pipes and the new X1650 XT has 24 pixel pipes.  Here ATI provided a table that compared their X1650 XT to the NVIDIA 7600 GT card, showing that the ATI card has more pipelines than NVIDIA’s option.  Sure, that is indeed the case, but it is not necessarily an indicator of any gaming performance.