Looking at the Card

The AMD/ATI Radeon X1650 XT looks very much like the other mid-range and budget cards that ATI has brought onto the scene in the last year. 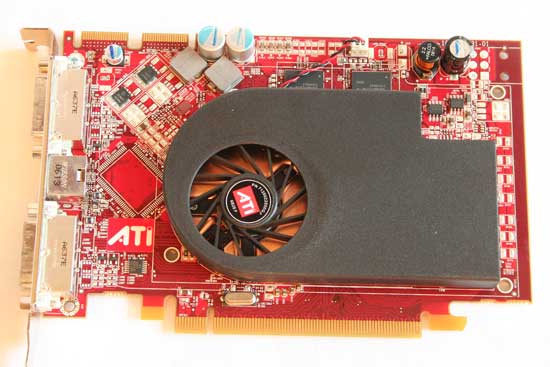 The card’s heatsink and fan are a single slot only and can be noisy when the fans are in full-speed spin mode.  Luckily, once you get the card drivers installed, that doesn’t seem to happen very often and the card runs relatively quiet.  You’ll also notice that these cards do not require an external power connection, indicating that total power usage is probably around 75 watts or below. 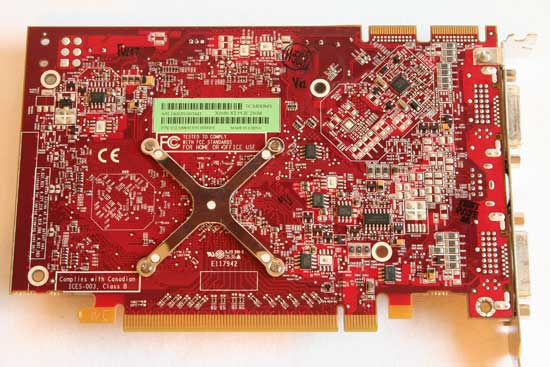 The rear of the X1650 XT is empty as well with all of the 256MB of memory on the front of the card under the heatsink. 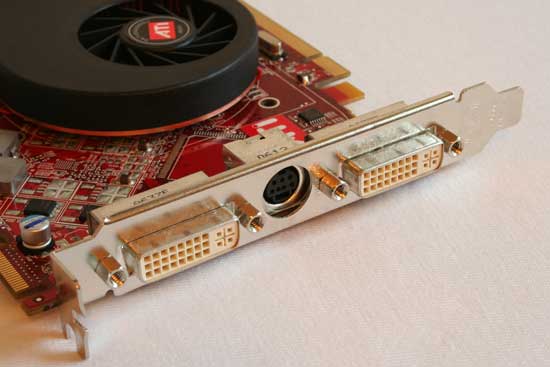 On the connection side of the card you’ll find two dual link DVI connections so you can plug in monitors like the 30″ Dell with resolutions of 2560×1600 without a problem.

Since the very beginning of ATI’s CrossFire technology introduction, we have been critical of ATI’s implementation of dual-GPU technology.  Using an external DVI-like dongle and an external programmable logic chip, with often debilitating limitations, it seemed very hacked together, an obvious last minute addition that went uncorrected for way too long.  But with the introduction of the X1950 Pro card (and now the X1650 XT), ATI has implemented internal and integrated CrossFire technology. 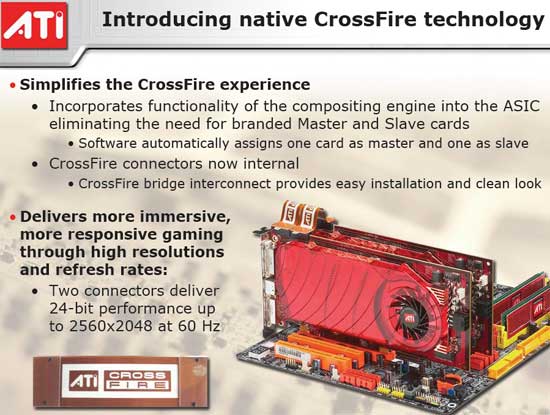 As this slide tells us, the new compositing engine has been integrated into the GPU ASIC.  No longer are you going to need to worry about buying a specific “master” CrossFire card to go with your standard “slave” cards!  The data transfer between the compositing engine is now done internally as well, with a conneciton very similar to what NVIDIA’s SLI connection looks like, but with two connectors instead of one.  This internal connection is capable of transfering enough data for a 2560×2048 resolution @ 60 Hz, running on two independent 12-bit data paths.

What you might be suprised to learn though is that the technical functioning of CrossFire remains unchanged; the entire process is the same to the software as previous CrossFire versions.  The functions of the custom Xilinx programmable logic has simply been moved into the GPU.  So functionally, CrossFire remains the same — any issues or limitations that existed before will be carried over here.

If there is one place where ATI’s CrossFire has had the advantage over NVIDIA’s SLI multi-GPU technology, it is in platform support.  CrossFire will run on any of the CrossFire-ready ATI chipsets for AMD or Intel platforms, as well as the Intel 975X chipset (and recently the P965 chipset).  From what I have been told as well, support on NVIDIA motherboards is probably closer than we think too, as it is only a software switch holding it from customers. 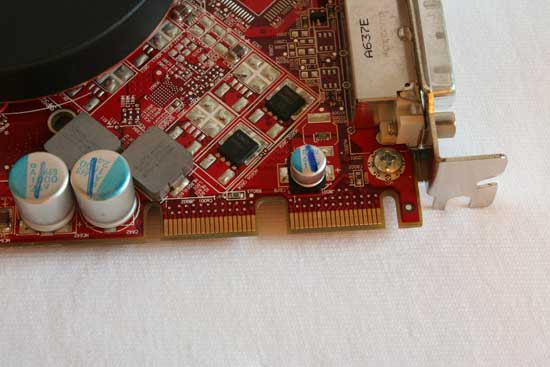 At the top of the X1650 XT card you can see the two sets of gold connectors for the new internal CrossFire connections. 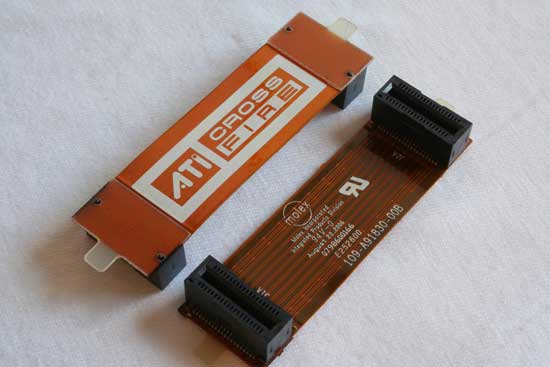 You’ll need two of these cables for CrossFire to get the best performance.  ATI told us that since their multi-GPU implementation is platform independent, they will be including one dongle cable with each X1650 XT graphics card.  Motherboard vendors don’t have to worry about that item then, and when a user buys two X1650 XT GPUs, they’ll have all the hardware they need for CrossFire to run correctly. 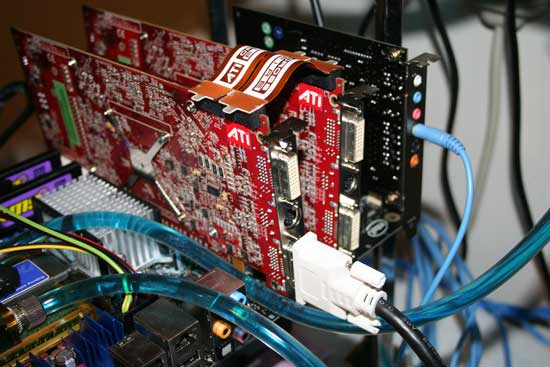 Here you can see our ATI X1950 Pro CrossFire setup running on the Intel 975XBX motherboard; no external dongles and a clean internal data connection!  Software setup remains the same, you need only to check a single box in the Catalyst Control Center to enable CrossFire and you are off and running.