Our power consumption numbers show the ATI X1650 XT to run with a little more juice than NVIDIA’s 7600 GT card and the ATI X1800 GTO we have mentioned several times.  Running a pair of the X1650 XT’s increases total power consumption to 285 watts, indicating a 79 watt usage for the additional card.

When looking at the cards we tested here today, the ATI X1650 XT, the NVIDIA GeForce 7600 GT (in an overclocked BFG model) and the older (and discontinued) X1800 GTO, the X1800 GTO is probably the best of the three cards.  However, since that option is either already gone or will be by the end of the year as the rest of any stock in the channel filters its way out, it really is a toss up between the NVIDIA and ATI options that are left.

Both the 7600 GT and X1650 XT perform well enough for casual gamers and if your budget is limited to this range, your choice might be made more on the platform you’d like to adopt rather than the graphics card.  Considering an NVIDIA chipset on an AMD or Intel processor and you’ll probably lean towards the 7600 GT card.  If you like the Intel 975X or 965 chipsets, then the multi-GPU platform of CrossFire is where you might place your bets.

Without the bulky and cumbersome external dongle, and without the need to hunt down a specific CrossFire edition “master” card, ATI’s X1650 XT should be able to bring multi-GPU CrossFire to many more gamers than all the previous CrossFire iterations. 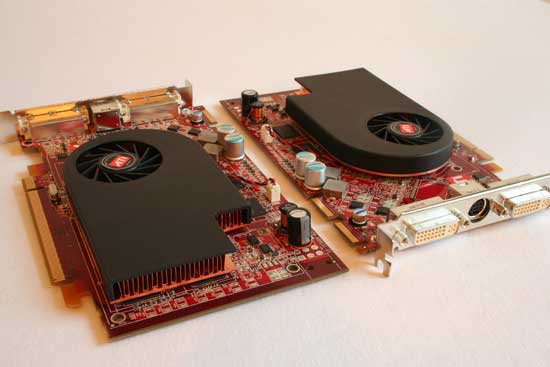 Now’s the time for CrossFire??

As I mentioned previously as well, ATI’s CrossFire does have the advantage of a “more open” architecture than NVIDIA’s SLI technology.  You can currently run CrossFire on any of ATI’s chipset motherboards with more than one x16 PCIe slot as well as on Intel 975X chipset motherboards and even some Intel P965 chipsets (like the Asus P5B Deluxe); and from what I have been told it is likely that we will see CrossFire on NVIDIA chipsets soon.  NVIDIA’s SLI is limited to NVIDIA’s SLI-ready chipsets only.  Considering the fact that finding an NVIDIA Intel-based 590 SLI motherboard is like hunting for a needle in a wide-open, 975X-ridden grassy field. And if you wanted Core 2 gaming with multiple GPUs, ATI is the only one with enthusiast level coverage.  For now.

The only outstanding issue that I have with CrossFire on the X1650 XT is that in several of our games, scaling on the dual-card setup was rather poor.  20% gains for twice the graphics card investment doesn’t seem like a very good financial decision and we’re talking about VERY popular game titles here; ones that should be addressed by the driver team at ATI first.  Can or will they improve performance on CrossFire in these and other titles?

With the X1950 Pro release earlier in the month, ATI promised immediate availability of the card on launch day (October 17th) with a price point of $199.   Unfortunately, that didn’t happen; until 8-9 days after the release the only X1950 Pro we could find was priced at $299, a 50% raise over the expected MSRP!

As we have mentioned several times, the expected price for the new X1650 XT is about $150 — but don’t expect to find this for sale today.  ATI called us late last week to pre-emptively let us know that there was a slight delay in the chain and that we wouldn’t be seeing availability of the X1650 XT until around mid-November.  Since the press had the cards already and had planned on an NDA release of today, ATI decided NOT to attempt to push out the announcement and instead fess up to the delay.

As for pricing, ATI tends to raise their hands here placing all of the blame on the channel, retailers, etc.  They may have a point, but all that bad press is focused on them, not Newegg or the channel.

Looking at the competition, the NVIDIA 7600 GT is widely available with prices ranging from $130 up to $200 for some higher end models.  It almost seems that before ATI can get product on the shelf, they are behind once again with only a minor price adjustment.

The AMD ATI Radeon X1650 XT is a great video card for users looking for a budget card that is still able to play most of the latest titles at high resolutions.  The competition from NVIDIA and the 7600 GT is tough, and ATI will need to get these cards in the market soon, and at the price they are promised in order for it to be successful.

If you have any questions about the article, or comments, or would like to see what others are saying about the ATI X1650 XT, just hop into this thread in our forums to get in the discussion!

Be sure to use our price-checking engine to find the best prices on these and other video cards and anything else you may want to buy.

AMD comes through for the gamer