As performance difference between motherboards of the same platform slowly begin to meld into one another, the included features and board layout have become arguably the most important aspect in a motherboard. 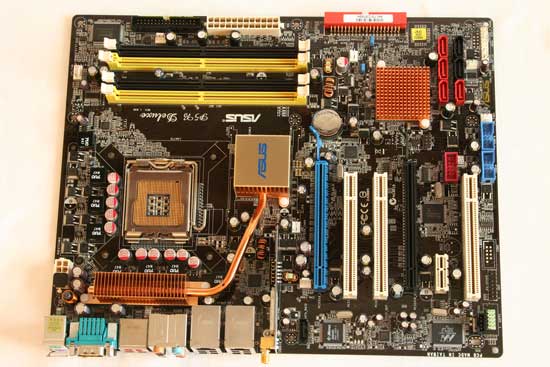 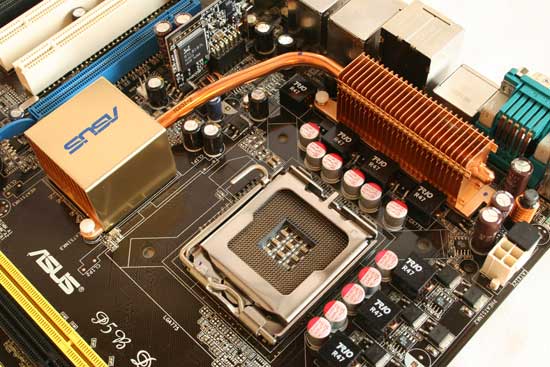 The LGA775 processor socket is surrounded by some small solid state capacitors as well as the now almost common Asus-branded heatpipe chipset cooler.  The heatsink covering the Intel P965 chipset passes heat off through a small heatpipe that leads to cooling fins near the external rear connectors.  The fins can cool this chipset pretty effectively using air from a CPU cooler though Asus includes an add-on fan for the fins if you use water cooling of some kind. 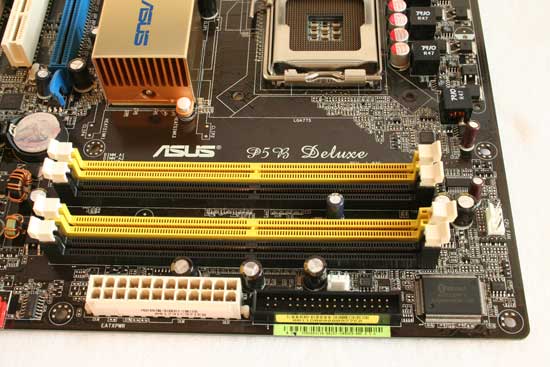 The four DDR2 DIMM slots to the right of the processor socket are well spaced and present an easy memory setup.  The ATX power connector and floppy connector are between the memory slots and the edge of the motherboard; this keeps the ATX power cable out of the way of any fans.  The only down point here is that the DIMM retention slips are low enough to make contact with the back of the video card in the primary PCIe slot when in their open position.  This means that to safely remove and add memory you’ll need to remove the video card as well. 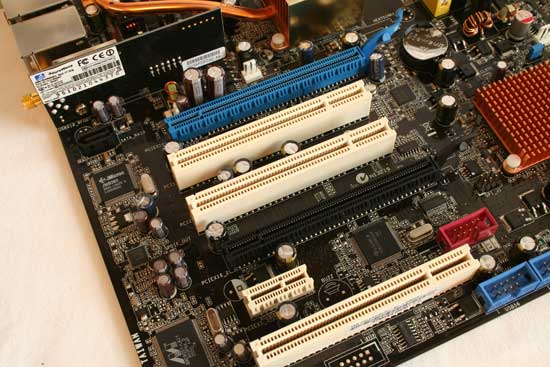 Looking at the expansion configuration on the Asus P5B Deluxe, the first thing you note is the two PCIe x16 connectors for graphics cards.  While the secondary slot (black one) can only run at x1, x2 or x4 actual speeds, Asus and ATI just released software to allow CrossFire support on the board.  Previously, the 965 chipset did NOT support CrossFire but that is slowly changing through the next couple of months.

There are three legacy PCI slots and x1 PCIe slot as well.  Installing a graphics card with a dual slot cooler, you will be taking up one of the PCI slots below the blue PCIe slot; using two cards in CrossFire mode will leave you with two PCI slots but no PCIe slots — probably the better of the options available to Asus knowing the current state of PCIe accessories. 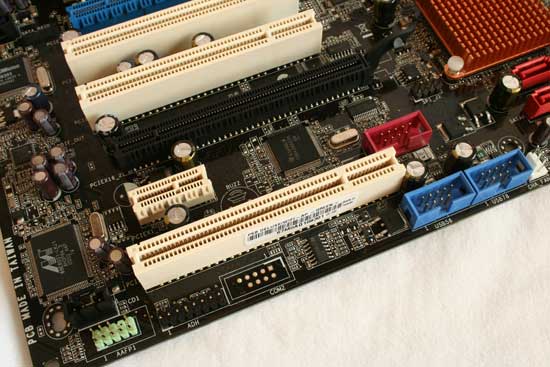 Below the expansion slots you can see the header for front panel audio (in green), two USB 2.0 headers (in blue) and the single additional FireWire header (in red). 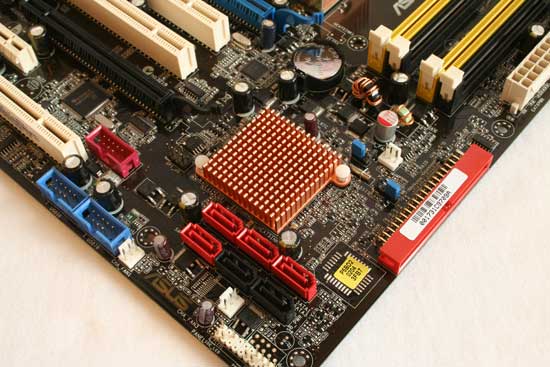 Looking at the storage section on the P5B Deluxe, you can see that Asus hasn’t left much to the imagination.  There are a total of six SATA connections seen here, all of them from the ICH8R south bridge.  Because Asus used 6 SATA channels from the south bridge, the only IDE connection (seen on the edge of the board on a red connector) is provided by the JMicron JMB363 chip.  That same JMicron chip provides the single internal SATA connection up by the wireless networking card and the external SATA connection. 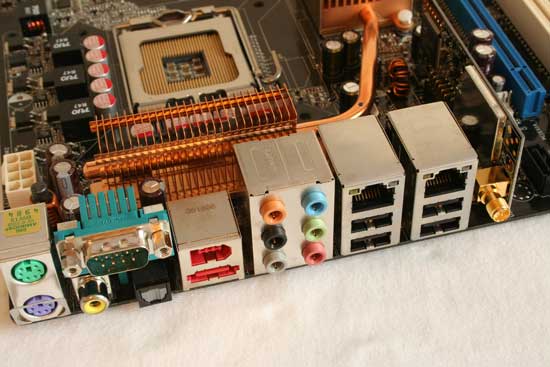 Here is what lines the back of your system if you chose to install the Asus P5B Deluxe in it.  There are standard PS2 ports and even a legacy serial port (I actually still use one!).  There a lot of good audio connections includine jacks or 8 channel analog audio and both a coaxial and optical digital audio connection as well.  The red connections are for the integrated FireWire connection and the eSATA port.  There are two Gigabit Ethernet connections, though one is running over a PCI bus, limiting its performance just a bit. 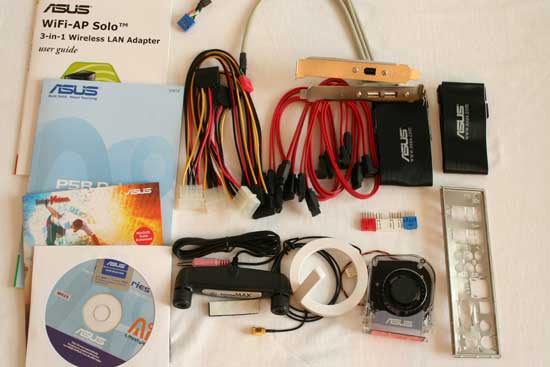 The Asus P5B Deluxe WiFi/AP motherboard has a lot of extras included with it to make it a great motherboard kit.  First, you get all the manuals and drivers you would expect, as well as six SATA cables (half of which use right-angle connectors) and six power adaptors as well.  That should cover just about all of your SATA needs.  They also have a single IDE and floppy cable for the legacy devices included.  Asus’ own SoundMax microphone, that claims to remove background noise by using two seperate microphones and having software analyze it, is included with some velcro to attach it to the top of your monitor.

The white disc is the wireless antennae for the integrate wireless networking logic included on the board.  The fan to the right of it is the one provided for the heatpipe fins.  Above the fan are the Asus Q-Connector pieces that make installation of the case LED and switch connections much easier.  Finally, the silver plate is the back panel for your case. 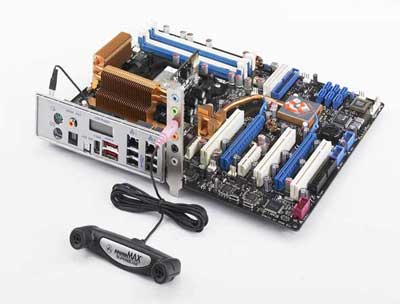