Since this is our first Intel 965 chipset motherboard review, looking at performance is going to be limited to comparing the Asus P5B Deluxe to some 975X based motherboards.  In our testing, the 965 chipset was just a minute amount slower than our 975X chipset-basd motherboards.  The results showed some slower synthetic memory scores on the P5B Deluxe, and that translated into a few benchmarks where the P5B lagged behind a small percentage; not more than 5%.  Those performance differences won’t translate into a noticeable real world change though.

That being said, users that want top performance may shy away from the P5B Deluxe because of that.  What I am curious to know whether the memory results are slower simply because Asus has had less time to work with the 965 chipset and tweak it the way they have the 975X.  The 975X chipset has been in production for well over a year and because of that all the board vendors have gotten to know it very well.

The Asus P5B Deluxe was not really aimed at the hardcore enthusiast, but most users that want to overclock will be more than satisified with overclocking options this motherboard provides.  The BIOS has plenty of frequency and voltage settings as well as a clean navigation through it all.  The voltages don’t reach as high as we saw on the P5W DH motherboard based on the 975X.  Some of Asus’ AMD solutions have had some very detailed BIOS options including the M2N32-SLI and especially the Asus Crosshair motherboard, also using the NVIDIA nForce 590 SLI chipset.

One of my favorite features is the integrated CMOS flashing utilitity integrated into the BIOS and the menu system — no longer are you going to be hunting for a bootable floppy disc!

The Asus P5B Deluxe excels in the feature department — it has pretty much anything you could ask for.  Eight integrated SATA connections (7 internal and 1 external) and a single IDE channel should supply more than enough storage capacity for any user.  Six of the SATA channels are provided by the Intel ICH8R and support RAID 1, 0, 0+1, 5 and Intel’s Matrix Array technology.  USB 2.0 and FireWire connections are plentiful as well; the P5B has got you covered. 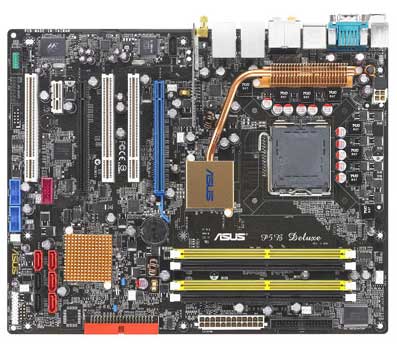 The integrated 8-channel audio is pretty good quality as evident by our RMAA testing and the two integrated Gigabit Ethernet connections should be fast enough for all potential buyers though one of them is limited to about 580 Mb/s.  The integrated wireless networking (802.11b/g) is a nice add-on as well for users that have a wireless network in their house or would like to set one up without have to buy a router for it.

Coming in just in time for our review, Asus and ATI were able to sneak CrossFire support in on the P5B Deluxe in time for publication.  As I mentioned in our Gaming benchmarks section, after an upgrade of the BIOS and moving to Catalyst 6.9 drivers, CrossFire support was a snap to setup.  The only hurdle for us was the need to set the secondary PCIe slot to x4 PCIe bandwidth in the BIOS.

Once CrossFire was setup and running, playing games on it was fun and satisfying; there weren’t any crashes or problems that we ran into while playing Call of Duty 2, FEAR and Day of Defeat: Source.  3DMark06 looped for several hours without a problem too.  Adding CrossFire support to the 965 chipset and the Asus P5B Deluxe could give a boost to both 965 sales as well as ATI’s GPUs.

As of this writing, the Asus P5B Deluxe WiFi version is widely available online and can be found for prices just about $200.  Newegg has the P5B Deluxe WiFi for $239.99.  Comparing those prices to Asus’ own 975X motherboard, the P5W DH Deluxe, it can be found online for about $250 and at Newegg.com for $269.99.  With those prices in hand, the P5B Deluxe looks like a pretty good deal having just as many features but slightly lower (and we mean slightly) performance.

To be fair, you can find some Intel 975X based motherboards for sale under $200 from Asus and other vendors, but whether they will have the features and stability of this motherboard is up in the air.

The Asus P5B Deluxe WiFi motherboard offers users good performance for the Core 2 Duo processors, a superb feature set including tons of storage options and wireless networking and even introduced ATI CrossFire multi-GPU support this week.  With its competant overclocking capabilities and competitive price, I think the P5B Deluxe is going to be a fantastic choice for Core 2 system builders!

If you have questions for the author or want to see what others are saying about this board, please check out this thread in our forums!

Have you checked out our Product Specs database yet?  It allows you to make motherboard comparisons so you can see side by side what each motherboard offers and which has everything that you need.

Be sure to use our price checking engine to find the best prices on the Asus P5B Deluxe WiFi, and anything else you may want to buy!