ATI’s latest GPU is the X1950 Pro that comes in to the $200 price segment swinging a hammer; a very big hammer. CrossFire gets an update as well with internal connectors and no more master or slave cards!

Just a few weeks ago, with the introduction of the NVIDIA 7950 GT, we were forced to re-evaluate the the mainstream graphics card segments with some new products and new price points.  The 7950 GT was set at an MSRP of $299, competing well against the ATI X1900 XT card at the same price point.

Today it is ATI’s turn to change the rules in the middle of the game.  With the introduction of a new GPU, dubbed the X1950 Pro, ATI is attempting to pin NVIDIA against the wall in the $200 price segment — probably the highest volume discrete graphics card market.  In this review we’ll look at how the ATI X1950 Pro is able to compete with the NVIDIA 7900 GS (the closest price competitor from NVIDIA) as well as the X1800 GTO, an older generation card from ATI that is somehow still priced near the $200 mark.  Finally, ATI’s CrossFire technology gets an update with this card to an internal, integrated solution.  What kind of changes does that move make for ATI? 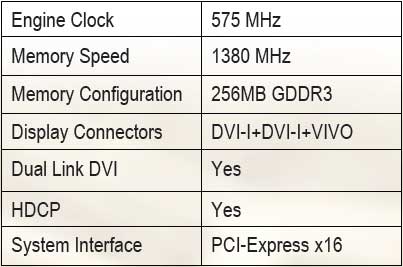 First up, the clock speeds are set at 575 MHz core and 1380 MHz memory, well below the 650 MHz core and 2.0 GHz clocks on the flagship X1950 XTX card.  The X1950 Pro will ship with 256MB of GDDR3 memory as well, which is half of what the X1950 XTX ships with.  The Pro card includes two dual-link DVI connections and standard definition VIVO support.  A new feature though, is that all built-by-ATI cards are going to have HDCP support out of the box, though third-party manufacturers will have the option of including it; so check carefully! 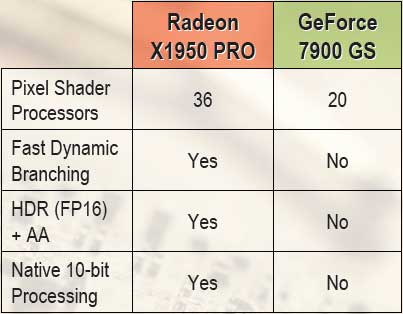 This table shows us what other differences the X1950 Pro has from the other X1900 and X1950 GPUs; the Pro model has 36 total pixel pipelines as opposed to the 48 pixel pipelines on the flagship cards.  ATI is quick to point out though that compared to the NVIDIA 7900 GS, it has nearly double the pixel pipes.  Of course, we all know that pixel pipes doesn’t automatically translate into game performance, so we’ll save our evaluation for after the real gameplay tests.

Recently ATI and Stanford University announced a partnership to bring the Folding @ Home client to ATI X19xx series GPUs.  Serious folders will be glad to hear that the new X1950 Pro, with a lower price than other X1900 options on the market, will still support the new Folding @ Home GPU client software.