At idle, all three of the single card setups use the same amount of power from the wall, but at the load test, the ATI X1950 Pro uses about 20 watts more power than the NVIDIA 7900 GS card and ATI X1800 GTO.  The dual X1950 Pro CrossFire system used an extra 17 watts at idle and 72 watts at load; a 33% increase in power consumption.  Weighing that against performance increases shows a pretty good performance/watt increase with their CrossFire technology and the X1950 Pro.

The Radeon X1950 Pro was definitely the best performing card for under $200; the majority our gaming tests showed that the X1950 Pro had the power to out perform the only a few months old NVIDIA 7900 GS card, even in the overclocked card we had from XFX.  In the pair of games where the X1950 Pro didn’t win out right, the NVIDIA and ATI GPUs were neck and neck in performance at both 1600×1200 and 1920×1200.

The performance advantages for the X1950 Pro ranged from just a couple of percent to nearly 20% in Battlefield 2.  By taking the very powerful and very successful X1950 GPU core and trimming it down just slightly (from 48 pixel pipes to 36), and keeping the price very competitive ATI was able to stay competitive with NVIDIA’s dominating 7-series of GPUs.

Looking at the table above, you can see just below the new X1950 Pro is a card called the X1900 GT; remember that one?  I won’t penalize you if you don’t.  Many people tried to use it as a comparison to the 7900 GS when it first arrived, but I had been tipped off that it would have a short life.  Turns out that was correct, as any X1900 GTs in the market now are going to be the last and the line officially killed off.  And for good reason: the X1950 Pro is a much better option.

I am pleased to report that ATI’s CrossFire is to a point where recommending it for a system isn’t a risky endeavor.  Without the bulky and cumbersome external dongle, and without the need to hunt down a specific CrossFire edition “master” card, ATI’s X1950 Pro should be able to bring multi-GPU CrossFire to many more gamers than all the previous CrossFire iterations. 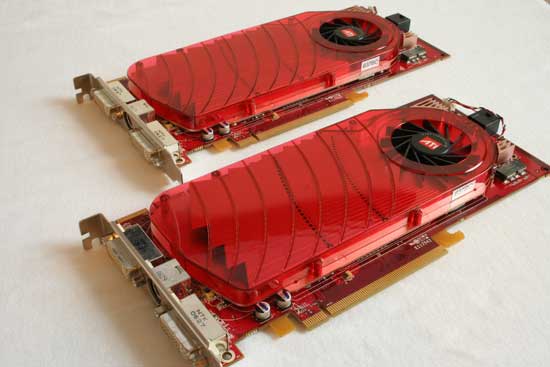 Now’s the time for CrossFire??

As I mentioned previously as well, ATI’s CrossFire does have the advantage of a “more open” architecture than NVIDIA’s SLI technology.  You can currently run CrossFire on any of ATI’s chipset motherboards with more than one x16 PCIe slot as well as on Intel 975X chipset motherboards and even some Intel P965 chipsets (like the Asus P5B Deluxe); and from what I have been told it is likely that we will see CrossFire on NVIDIA chipsets soon.  NVIDIA’s SLI is limited to NVIDIA’s SLI-ready chipsets only.  Considering the fact that finding a NVIDIA Intel-based 590 SLI motherboard is like hunting for a needle in a wide-open, 975X-ridden grassy field. And if you wanted Core 2 gaming with multiple GPUs, ATI is the only one with enthusiast level coverage.  For now.

One caveat to all of this is that the CrossFire performance improvements that we saw on the X1950 Pro today weren’t very impressive when we compare it to the gains we saw in SLI recently.  In many cases, in our 7950 GT SLI setup, we were seeing performance gains near 85%!

Ah, the one area of our GPU reviews that takes some tact and makes us “guess” about the future.  For clarification, here is what ATI presented to us:

As of today, October 17th, ATI claimed that they would have X1950 Pro availability at several online retailers; and at these prices.  I am sure most will be just slightly over $199 as we have come to see during the first launch days, but prices normally settle within a week or so.  Will ATI deliver this time?  They have had a rocky past on this front with the X1900 GT (we talked about above) and with various other X1800 and X1900 launches.

NVIDIA on the other hand has done exceedingly well getting their products out at prices they promise and at the times they promise.  The 7900 GS was available from day one, and we haven’t seen any indications of stock issues since then.

Assuming all goes well for ATI, the price of the X1950 Pro at $199 is putting it in a very good position against the NVIDIA 7900 GS cards.  The XFX model we used in this review currently is selling for $200 as well and this EVGA model (overclocked) is selling for as low as $216.

The new ATI Radeon X1950 Pro is a great mid-range enthusiast graphics card that offers best in class performance as well high levels of image quality offering the user a great selection of choices for their gaming scenario.  1024×768 with HDR and AA enabled or 1600×1200 with 4xAA/8xAF?  The X1950 Pro has you covered on both for under $200.  And with a CrossFire solution that is much improved, ATI can be confident that their multi-GPU platform is no slouch either.

Please DIGG this article if you found it informative!  Thank you!

If you have any questions about the article, or comments, or would like to see what others are saying about the ATI X1950 Pro, just hop into this thread in our forums to get in the discussion!

Be sure to use our price checking engine to find the best prices on the ATI Radeon X1950 Pro and anything else you may want to buy!