NVIDIA has established a strong name for themselves in the mobile GPU market. If you look at the fastest performing laptops on the market today you will see that majority of them will carry a GeForce Go 7900 GTX or a Go 7900 GS. With manufacturers like Alienware, Dell, Toshiba, and Voodoo putting NVIDIA GPUs into their top-end notebooks, it’s not hard to understand  why NVIDIA has become synonymous with performance laptops.

Never to be a company that rests on its laurels, NVIDIA has launched an update to their top mobile GPU in the form of the GeForce Go 7950 GTX. While it is not an architecture change, it does feature some performance bumps to keep pace with the desktop cousins and with more demanding games. 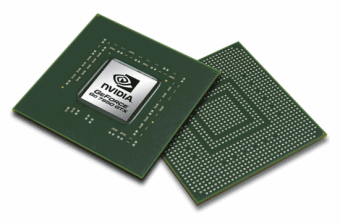 When it comes down to the hardware itself, not much has changed on the Go 7950 GTX compared to the Go 7900 GTX. 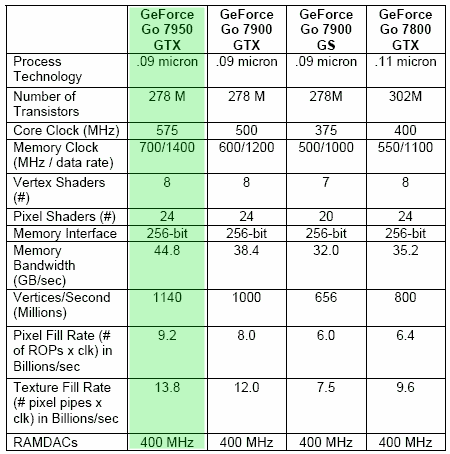 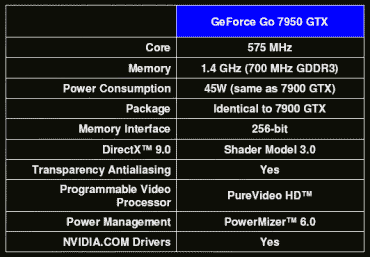 The core clock has increased 75MHz on the Go 7950 GTX and the memory and additional 100 MHz (or 200 MHz in DDR) compared to the Go 7900 GTX. The number of shaders, the manufacturing process, and number of transistors remain the same.

NVIDIA has also kept the package and power consumption exactly the same as the GeForce Go 7900 GTX, so manufacturers will have an easier time integrating the latest mobile GPU into the product line up without much of a delay.

In terms of GPU features, the Go 7950 GTX implements the exact same functionality as all other Series 7 mobile GPU. Here’s the breakdown of major features:

Conspicuously absent is a GeForce Go 7950 GS model. With the Go 7900 GS selling well on a wide variety of performance and enthusiast laptops, there’s no real reason for NVIDIA to cannibalize their own success. When a GS model is released, I suspect it will perform just slightly slower and priced much cheaper than the current Go 7900 GTX. NVIDIA may wait for a rival to release a competing product before announcing a Go 7950 GS, or quietly slip it into the market with little fan-fare as they have done in the past.

The announcement of the Go 7950 GTX has a lot to do with keeping up with the market and giving vendors a new configuration option without partners having to retool their products. For the consumer, you get another GPU option to select from when configuring your next gaming laptop, but don’t expect anything new in terms of features. This is just an update rather than an architectural change. 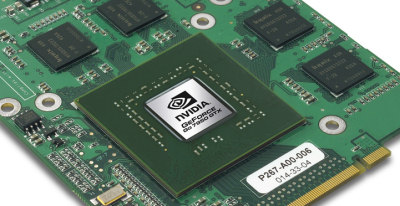 NVIDIA’s latest GeForce Go mobile GPU is faster than the Go 7900 GTX predecessor, but I suspect the performance gap to be minimal. A 75 MHz core clock and a 100 MHz memory bump will not drastically change the way games perform today. But if you have a severe mobile performance itch to scratch, then one (or two!) of these in your next laptop will keep you from feeling dated and slow.

NVIDIA has been improving their record of making their GPUs available shortly after launch. Expect this latest GPU to start shipping in top vendors like Dell and Toshiba in a few weeks, with other manufacturers to follow.

Keep an eye on our PriceGrabber search engine for availability and pricing of laptops using the Go 7900 GTX/GS and the Go 7950 GTX.