Zalman did a good job of designing the HD160 to provide above average ventilation and cooling.  The HD160 primarily relies on the two 80mm exhaust fans on the back panel to pull air thru the enclosure.  In many configurations, the power supply will enhance the overall airflow as well.  The HD160 comes with a Zalman ZM-MC1 multi-connector attached to the two rear case fans.  The multi-connector has two sets of 3-pin fan connectors; one set is wired for 12V operation (black) and the other pair for 5V operation (white).  According to the User’s Manual, the rear case fans run at 2,800 rpm, 32 dB on 12V and 1,400 rpm, 20 dB on 5V.  This provides some flexibility for selecting the right balance between cooling performance and noise.  Alternately, a Zalman FanMate 2 fan speed controller could be used for even greater flexibility. 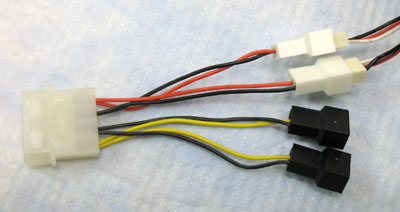 Vents are strategically located on the top, both sides, and bottom of the case.  This layout should work particularly well with tower-style CPU coolers (like the Zalman CNPS9500 CPU cooler) that can be oriented in-line with the rear case fans.

The ventilation slots under the HDD cage area allows cool air to be pulled in to help cool the drives.  This provides very good air cooling for one or two drives. With three drives installed, the tight spacing will restrict airflow.  And unfortunately, there are no side vents beside the HDD cage, which could be even more effective at cooling the HDDs.  I wish Zalman had placed vent openings at both the front and rear of the left hand side panel, instead of just at the rear.  However, an optional 80mm fan can be mounted under the HDD cage to augment airflow. 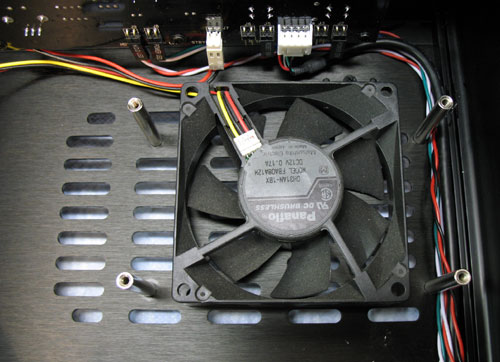 As mentioned earlier, there isn’t much air circulation around the single 3.5′ internal bay on top of the optical drive.  Using a relatively low-speed, cool HDD in this location should be OK but one of the newer high-speed drives might get pretty warm.

The large circular vent on top of the case allows cool air to be drawn in right over the CPU area.  This vent is adjustable, so it can be used to help balance the overall airflow throughout the case. 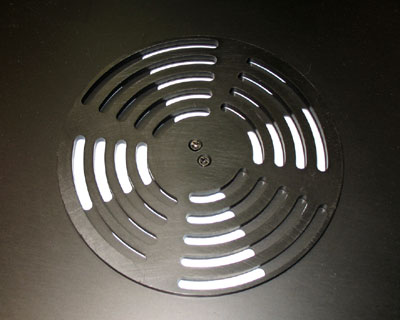 There are two small screws on the bottom side of the top vent’s central hub that can be tightened to lock it into position.  Tightening these screws can also help keep the adjustable vent from rattling.  Unfortunately, aluminum panels are more prone to vibration and resonance than denser steel panels are.

Temperatures were very good for the modest system I installed in the HD160 HTPC enclosure.  On average the CPU and HDD temperatures ran 4~5ÂºC warmer with the case closed up than with the top off.  Both the CPU and VGA coolers were run at full speed (12V).  The video card ran 6~8 ÂºC warmer under load inside the HD160 but since installing the VF900-Cu LED VGA cooler had already lowered temps by almost 20ÂºC, this wasn’t an issue.

With the system closed up and running under load, the average sound pressure level was 38.6 dBA; measured 3′ in front of the HD160 (background ~30 dBA).  The Zalman PSU was virtually silent but the CNPS9500 AM2 CPU cooler seemed to be generating the most audible noise.  Installing Zalman FanMate 2 fan speed controllers on both the CPU and video card coolers brought the noise level down below 35 dBA without significantly compromising temperatures.

BitFenix’ Colossus, store your system and maybe a small Protoss or two inside

A powerful decision that you have to make when modding