Taking the Hype in Stride

AMD is launching their much-hyped “4×4 quad-father” platform today known as Quad FX. Can their sewn-together quad-corep processing initiative work or will with the power consumption and performance compared to Intel’s QX6700 put it 6ft under?

When AMD first publicly revealed plans for its “4×4” platform during an investors phone conference, there was an immediate wave through the online enthusiast crowds and press about what exactly it was and how AMD was going to position it.  Would it cost thousands of dollars to own a dual-processor, dual-core system?  Is a return to a multi-processor system (instead of simply more cores) a step backwards?  Is it really just a stop gap since Intel beat them to the punch with their recently released Intel Core 2 Quad QX6700 processor?  Over the past several months, AMD has insisted that none of these statements will hold true for their “quad-father” baby, which has been officially dubbed as the AMD Quad FX platform.

I won’t spend too much time going over the past rumors of what AMD’s “4×4” technology WOULD be, and instead tell you about what it IS, as of today in its official form.  The new Athlon 64 FX-70, FX-72 and FX-74 processors are using a new socket technology called Socket F, a 1207-pin package that was originally introduced in the server-based Opteron processor line earlier this year.  That means that loyal AMD fans that migrated to the AM2 platform will not be using these new processors in their systems!  AMD says that the Quad FX, dual processor platform that they are announcing today though will continue to use the 1207-pin package into the future, as it is a requirement to increase pin count so that the three HyperTransport connections (standard Athlon FX and Athlon 64 processors only have one HT connection) have enough bandwidth to support multi-processor configurations.

The 1207-pin packaging on the new processors is very much like the current LGA packaging that Intel uses; there are no pins on the processors and instead they are on the motherboard itself.

Since these new CPUs are meant for the new 4×4 Quad FX platform, AMD has all intentions of only selling these CPUs in pairs meaning that buying one for a future upgrade doesn’t seem to be a viable option for enthusiasts at all.  And the pricing scheme?

I am actually very surprised to see the prices that AMD has put on their Quad FX lineup and they are very competitive.  The current top AMD processor is the Athlon 64 FX-62 for the AM2 platform and runs at 2.8 GHz, selling for just about $700 in some places.  The FX-74 CPU runs at a 200 MHz higher frequency and you are getting TWO of them for that $1200 price.  Intel’s own Core 2 Quad QX6700 processor is selling for nearly $1100 as of today.  Looking at just the processors then, you can theoretically get the top end of quad-core processor from both Intel and AMD for about $1200, though AMD is now offering options of quad-core processing (though in a two processor system) for as low as $600.

What will be interesting to see is how these kits are sold.  I am being told that for at least the first month or two of sales, you’ll only be able to buy motherboard/processor combos with the ONE motherboard that is going to be released to support Quad FX: Asus’ L1N64-SLI WS mainboard.  I would expect this board to sell for at least $300 though I wouldn’t be surprised to see it for $400 or more based on the features that it is offering.

The NVIDIA nForce 680a Platform

Since AMD hadn’t yet bought ATI when the Quad FX development was in its stride, the first chipset to support the new Quad FX platform is NVIDIA’s new nForce 680a chipset. 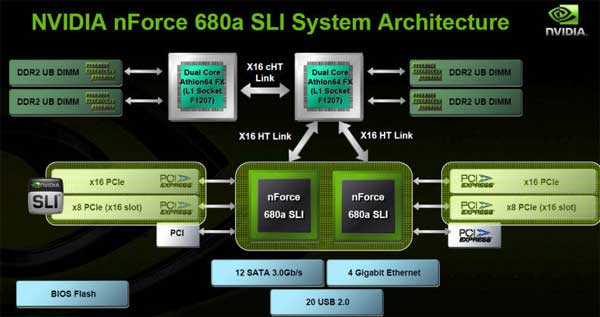 As this diagram shows, we are really looking at a motherboard that is based on two nForce chipsets, just on a single motherboard.  That gives the chipset an absolutely astounding amount of features, not to mention a hungry power diet.  There are four PCIe graphics card slots, with two of them supporting SLI in a x16-x8 configuration.  The other two slots also run at x16 and x8, though NVIDIA claims SLI won’t work on them.  For expansion NVIDIA has 12 SATA 3.0 Gb/s ports, 4 Gigabit Ethernet connections and 20 USB 2.0 channels!

You will notice though, that the chipsets only communicate with one of the two processors in the system through the standard 16-bit HyperTransport connection.  The second processor has a HT connection to the primary CPU only — any data that it needs to get from the system must first pass through the primary processor.  Each CPU socket does have its own memory allocation, providing a total memory bandwidth that is simply unmatched by anything Intel can offer.  All of these components do push the motherboard size up a bit from ATX to the eATX standard commonly used on workstation and server boards. 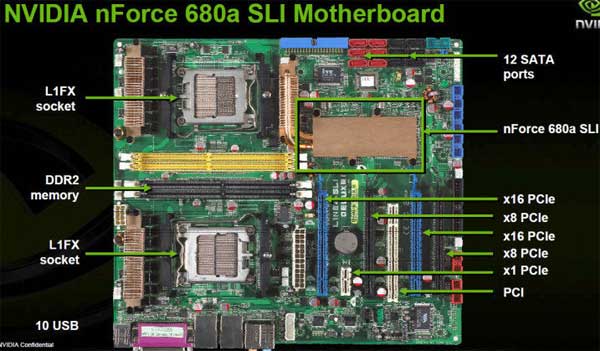 Looking at the reference motherboard (and what the Asus board resembles) you can see there are four PEG slots, a single legacy PCI slot and one PCIe x1 slot as well.  Both of the chipsets are located under the single heatsink behind the PEG connections with a heatpipe carrying the heat over to the first processor socket.  The two sets of memory banks only have two DIMM slots each, so your memory configurations are going be maxed out at 4 DIMMs total here.  There are plenty of SATA connections and USB ports to go around too.  Overall, the nForce 680a motherboard looks like a killer platform for a system, if not slightly (umm, yeah) overkill. 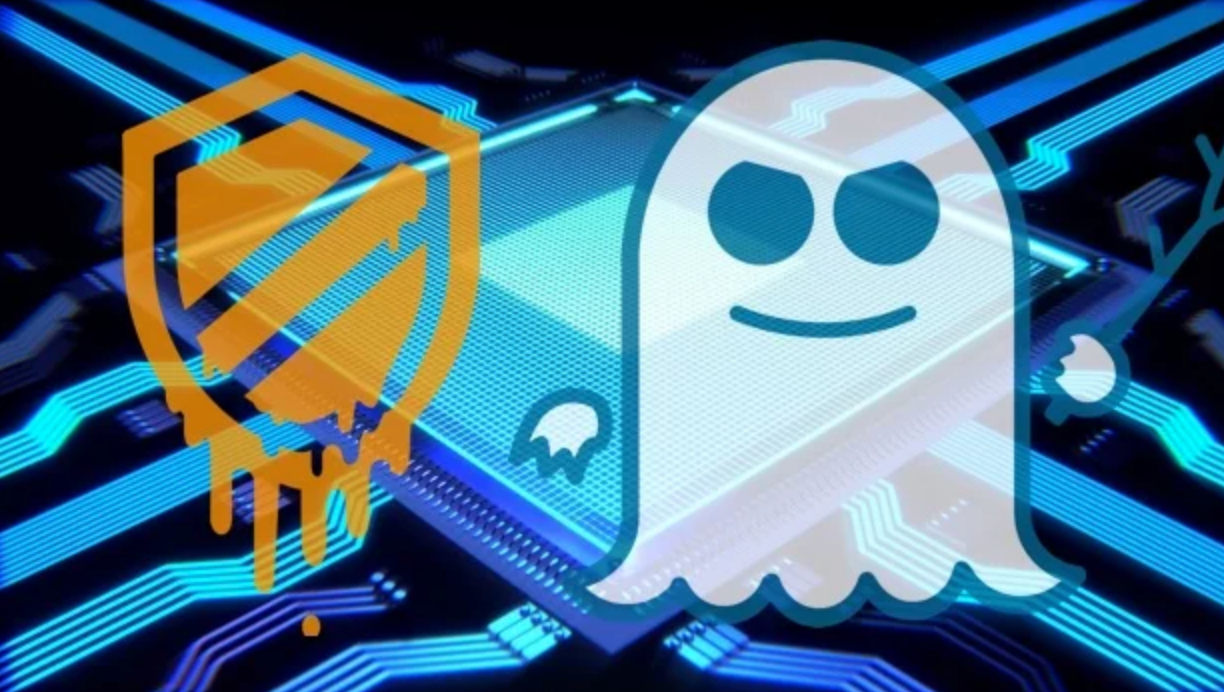 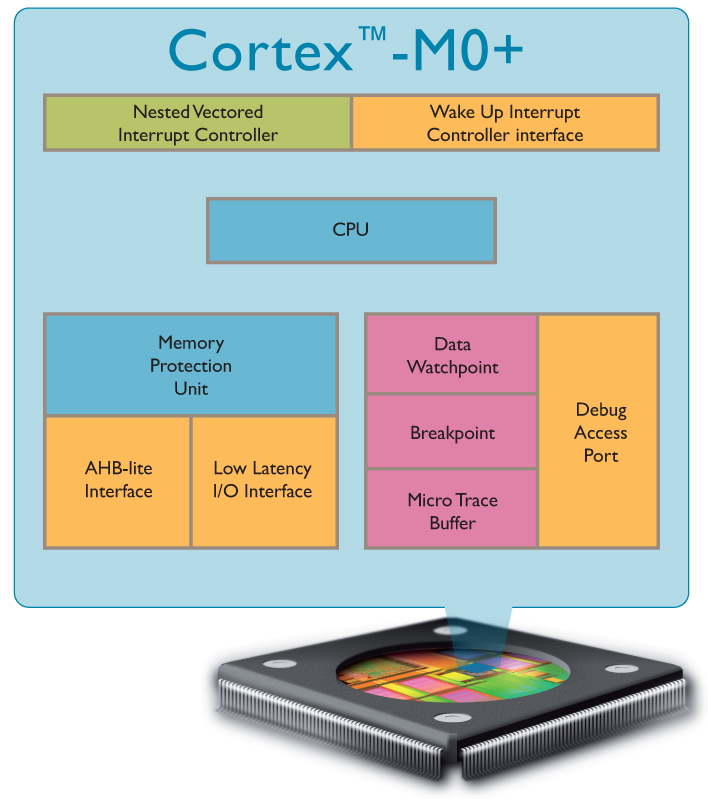