EVGA is the first partner to get us a motherboard based on NVIDIA’s new nForce 680i chipset for the Intel platform. If you are interested in SLI and maybe even some overclocking, this board definitely needs to be on your list!

If you blinked and didn’t notice that NVIDIA had released an nForce 590 SLI chipset for the Intel platform, don’t bother looking it up now.  Due to production issues, stability issues, overclocking issues, or SOMETHING, the 590 SLI Intel chipset was never really released and as far I know only a single motherboard was ever sold using the chipset.  If you talk to NVIDIA, they would let you believe that 590 SLI Intel led a strong life and will continue to gain market share on motherboard designs, but who are they kidding?  With the announcement and release of the nForce 680i chipset today, 590 has been shelved for good.

The NVIDIA nForce 680i Chipset

In truth, the majority of the 680i chipset remains in tact from the previos nForce4 and nForce 500 series designs. 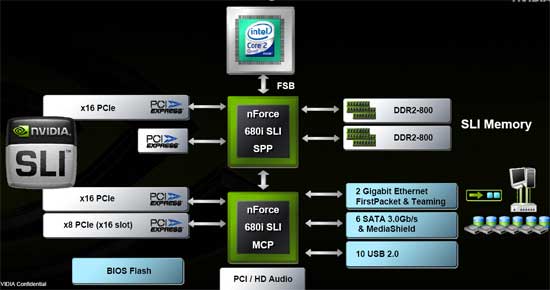 The 680i is still a two-chip design, with an SPP (north bridge) and MCP (south bridge) connected by a HyperTransport bridge.  Looking at this block diagram, there doesn’t appear to be anything really NEW added to the design; SLI support with full x16 bandwidth, HD audio, 2 Gigabit Ethernet jacks, DDR2-800, etc.   The features we have come to expect from the nForce lineup are all there and ready for use.  If you need a refresher on those features, head over to my first look at the 590 SLI chipsets to see what all the fuss is about.

What NVIDIA did improve on in the 680i is overclocking; and boy did they!  Claiming to have reached FSB speeds over 2.0 GHz with this chipset and standard Core 2 Duo processors, I was obviously eager to get my sample and test out the claims.  I’ll show you all of my overclocking results later in the review.

Finally, here is a summation of the features that NVIDIA’s 680i chipset offers, MediaShield, SLI and SLI-memory with EPP being the most important in my opinion.

NVIDIA is announcing two other chipsets today as well: the 650i series in both SLI and Ultra forms.  These chipsets differ as you might expect, the 650i SLI has 2 x8 PCIe slots for SLI support while the Ultra model only supports a single x16 PCIe slot and no SLI.  Otherwise, the two share specs that differ from the 680i chipset as follows:

Expect boards on these chipsets to be priced lower and to be available before the end of the year.