Let’s go ahead and get this part out of the way first: today you’ll notice that the motherboard I am using in the review is an EVGA motherboard and you will also be able to find motherboards from BFG Technologies and XFX that look nearly identical.  The reason for this is that now, NVIDIA is officially in the motherboard design business.

With the nForce 590 SLI chipset, you’ll remember that Foxconn partnered with NVIDIA to bring the reference board, nearly unchanged, with all the features and tweaks that NVIDIA included on it, to the market as a retail product.  NVIDIA was tired of bringing new features to the chipset (such as extensive nTune support) that were not properly implemented or shunned by the Taiwanese motherboard designers.  Why should they include new features in the chipset, brag about them to press, then have them executed poorly in the retail market?  The solution to this was to design their own board and sell the design to partners.

This is a very similar situation that NVIDIA graphics cards and GPU designs are in — most of the cards sold are basically relabeled reference boards with some overclocking and extras added by the likes of BFG, EVGA and XFX.  You can expect the motherboards based on NVIDIA’s 680i chipset design to be set up the same way — boards from BFG, EVGA and XFX will all look the same and support the same features; what will change is support, included extras and other minor points.

While I think the Taiwanese motherboard designers are probably going to be upset by the move, I think it makes perfect sense for the enthusiast — now support will be easier to find and NVIDIA will be able to address issues directly instead of pointing user’s towards the manufacturer’s team.

Of course, not all vendors are going this route, and custom designed 680i motherboards are still in the works from the likes of Asus, Abit and more.  We’ll be eagerly awaiting these boards to see if they can improve on NVIDIA’s design enough to stand out from the crowd.

The EVGA Board Layout

NVIDIA has taken in account nearly all of the enthusiast’s complaints about motherboard designs when producing the 680i reference board.  Let’s see how it looks: 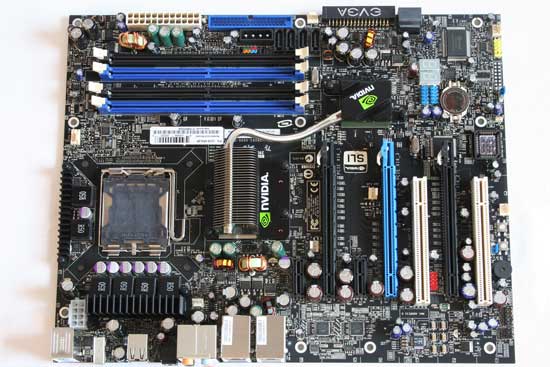 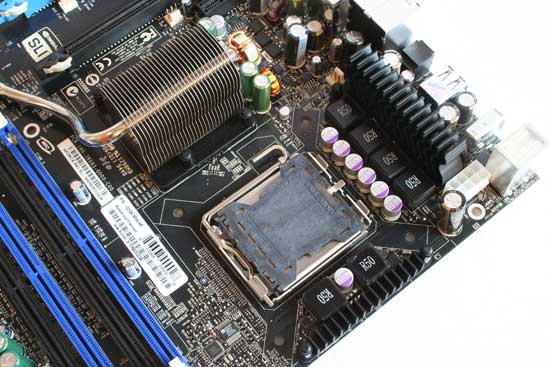 The LGA775 processor socket on the board supports all previous Pentium processors as well as the new Core 2 Duo Conroe and Kentsfield processors.  The capacitors and power regulators surrounding the socket are kept low enough to not interfere with heatsink installations and even with our Koolance water cooling setup. 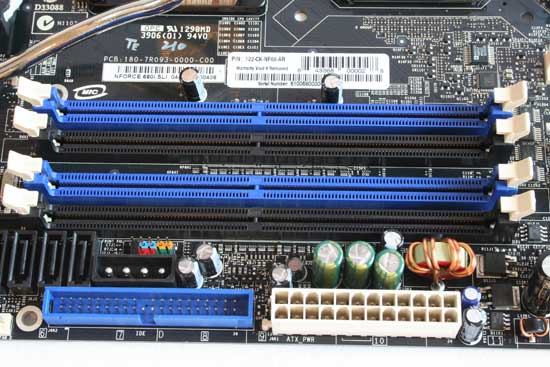 The four DIMM slots support memory officially at DDR2-800 speeds but can be clocked as high as 1200 MHz!  The blue slots should be filled first, and then the black slots, following the dual-channel memory logic we have come to expect.  You can see the 24-pin ATX power connector here as well, far enough away from the CPU heatsink to prevent issues as well as the single IDE channel located right below it.  The 4-pin molex power connector you see there is auxillary for additional power and stability, though I didn’t connect it during any of my testing or overclocking results. 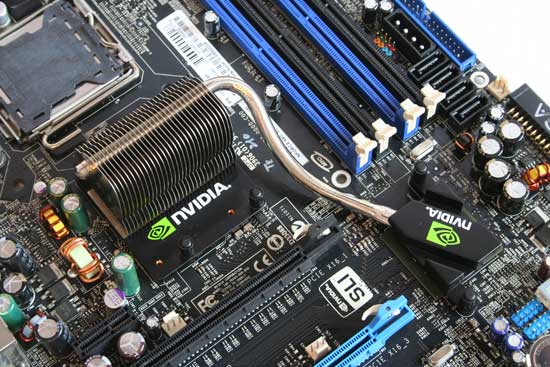 The SPP and MCP are being cooled by a passive heatpipe solution that is pretty short in comparison to some other designs we have seen recently.  It does not come into play when installing graphics cards or memory and is able to keep the chipset pretty cool on its own.  And, for those of you with interest, I have word from NVIDIA that says this heatpipe with work in either a normal or an upside down installation.  To quote NVIDIA: “The heatpipe includes a wick which allows the thermal energy to transfer from one point to another in any orientation, even against gravity.  In this solution the sintered powder of the heatpipe acts as the wicking structure.“ 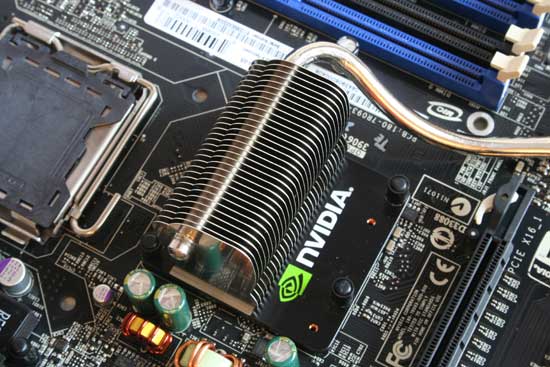 A close up of the north bridge heatsink reveals the cooling fins and the screw placements for adding the chipset fan. 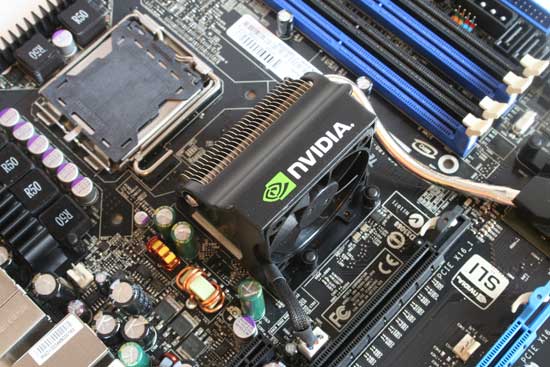 Here you can see the fan installed on the chipset; blowing air from behind the primary GPU across the chipset on to the processor.  This doesn’t seem like the ideal setup, but in truth we had zero stability problems so its hard to argue with success.  Even with the CPU and heatsink fan installed, there are five additional fan headers for use, allowing enthusiasts to make sure their system stays cool all the time.