The system performance on the NVIDIA 680i chipset, and specifically this EVGA motherboard model, was on par with the performance we have seen from the Intel 975X and P965 chipsets.  While at first that might not seem very exciting, the fact that NVIDIA is able to deliver a memory controller and platform that rivals the best efforts of Intel on their own Core 2 Duo processor is actually a strong testament to the engineering team at NVIDIA.  For many years, Intel’s dominance in the performance chipset market was seemingly never ending, as the likes of VIA, S3 and ULi never seemed to make a strong enough product to compete.  NVIDIA’s first Intel-based solutions, in the nForce4 and nForce 500 series of chipsets were good products, but still didn’t live up to the 975X chipset like the 680i does here.

So even though the performance of the 680i chipset doesn’t exceed that of the 975X or P965 chipsets, the fact that it can claim competitiveness with them is a positive for NVIDIA’s platform division.

With the release of the 680i chipset, NVIDIA is officially entering the motherboard design industry.  Though they won’t be selling the boards under their name anywhere, partners like EVGA are taking NVIDIA’s reference board and sticking their name on it and putting it for sale today; basically taking a book from the way NVIDIA works with partners in the GPU market. 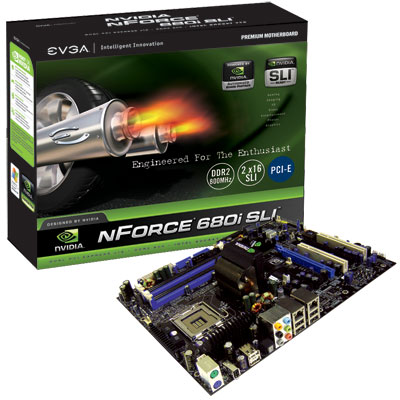 And this isn’t a bad thing!  The NVIDIA nForce 680i motherboard design is superb, bringing the best components and well thought out feature placement to a level I haven’t seen on a motherboard before.  The six layer board design was laid out in such a way as to provide optimal overclocking potential as well as being as friendly to the enthusiast installing in a system as possible.

With three PCIe x16 slots you have the ability to plug in three graphics card, either for SLI mode or for up to six monitors.  I think I hear an array of 6 Dell 30″ monitors calling my name…  They are spaced well to allow for the best thermal solution for SLI graphics cards and even with dual two-slot cards, you’ll have access to a legacy PCI slot and two PCIe slots.

All of the connectors, such as SATA and DIMM slots, are well laid out so as to not interfere with other components; now you can even have video cards AND SATA cables in your system!  With 7 total fan headers, enthusiasts won’t have to use their power supply for fan connections and the on-board power and reset switches will definitely help work-bench users or those that just have to have their head in their cases.

NVIDIA also gets a thumbs up from me on their motherboard BIOS — by far the easiest and most user friendly I have used to date.  One of the keys for me was the inclusion of a “current value” column in the BIOS screens that shows you what your current settings are (in memory or FSB for example).  This simplifies the overclocking and tweaking process so much, its hard to move to a motherboard without it once you have used one with it.

The other feature that stands out is the overclocking — all of it.  This BIOS lets you tweak EVERYTHING and to extreme settings.  Want to up your CPU voltage to 1.8v and memory to 2.5v with a simple BIOS switch?  Now you can, all within easy to read and understand menus.  Even the help items on the right hand column are easy to understand and actually aid in finding out what the setting does!  You’d be surprised to learn that this just hasn’t been the case before today.

To say we had success overclocking the EVGA 680i motherboard would be a dramatic understatement.  Does the phrase “2025 MHz FSB” mean anything to you?  If so, then you’re probably already amazed.  And the ability to do things like set the FSB and memory bus completely independent of one another is a dramatic change that will allow overclockers to reach new heights.  If you live to OC, you are going to love this board.

This is one area that is up in the air as of this publication — expect to find the boards in the $200 price range.  They should be ready and for sale starting later today, if NVIDIA follows their hard launch schedule as they are planning.  Seeing as we have seen many 975X boards and even P965 motherboards going for over $200, the 680i prices seem pretty reasonable, and extreme enthusiasts are more than willing to pay for the quality we have seen here in this review.

I’ll update here with more detailed pricing information as I find it.

Update: The motherboard is now showing up on our pricing engine, for as low as $269!

Update: Newegg has this EVGA 680i motherboard for sale and in stock for $269!

Update: ZipZoomFly also has the EVGA 680i board for sale, and the Asus Striker Extreme board for preoder!  Search for 680i on their site.

The NVIDIA GeForce 680i is by far the most impressive chipset I have seen from NVIDIA since the nForce2.  It offers performanace levels on par with the best Intel chipsets but adds extreme overclocking as well as SLI technology support, an improved feature set and perhaps the best layout and BIOS we have ever used.  EVGA should be proud to sell this motherboard and NVIDIA should be proud of the engineering that went into it.

If you have any questions about the review or product, please see this thread I started in our Intel motherboards forum!

Be sure to use our price checking engine to find the best prices on the EVGA nForce 680i motherboard, and anything else you may want to buy!