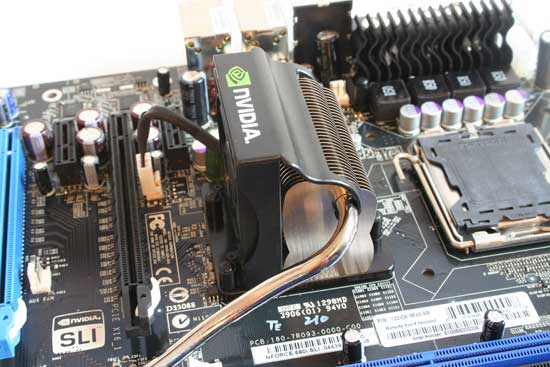 A side angle shot of the chipset cooler with fan attached shows us that while the heatpipe takes up some vertical space, it uses surprisingly little real estate on the motherboard. 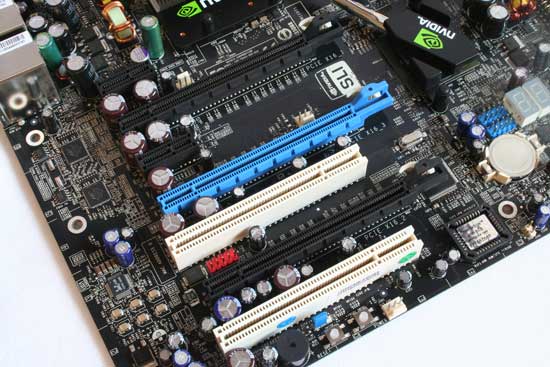 The expansion slot layout on the motherboard has three x16 PCIe slots, two of which are full x16 bandwidth; the blue one is only running at x8 PCIe bandwidth.  There are two legacy PCI slots on the board as well as two additional x1 PCIe slots.  NVIDIA explicitly claims that the third PCIe slot is for “physics acceleration”, so I am sure we’ll be seeing more from them on this topic very soon.  The retention clips on the PCIe slots are located behind the slots and are very easy to access and use with a single hand. 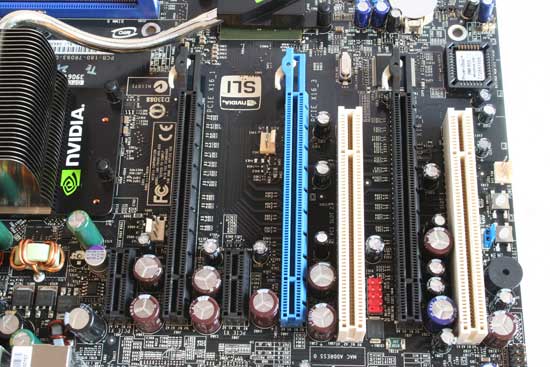 Another look at the expansion configuration shows that NVIDIA choose to put the two full x16 PCIe slots as far away as possible in order to get the best thermal design.  GPUs can get damn hot, and allowing air to pass between them in a hot case is very important.  Also, with two dual-slot video cards installed, you will still have access to both a PCI slot and two PCIe slots — something other motherboards can’t claim!

Also, note the two little white buttons below the last PCI slot there, just above the speaker in our image: these are dedicated power and reset buttons — a great feature for overclocker’s and system tweakers. 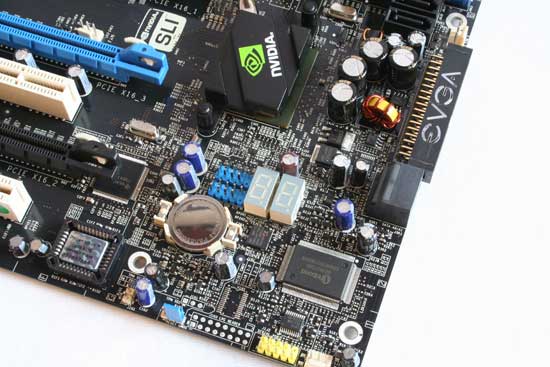 In the bottom section of the motherboard, where you would traditionally find the storage connections, instead we see a completely new design.  The EVGA-logoed connector is for the floppy drive and the small black header below it is actually two SATA connections that are facing AWAY from the board instead of straight up.  This prevents large graphics cards from interfering with the SATA connections — one of my worst headaches on board design!  You’ll also see a couple of additional USB headers and a Firewire header for added I/O support. 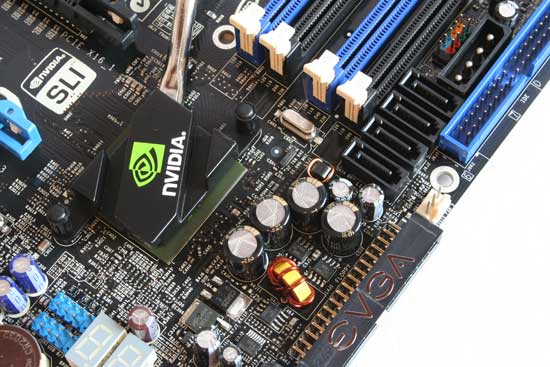 If you were looking for more than two SATA connections, here they are: four more are located directly behind the DIMM slots, out of the way of any of the expansion slots and out from under graphics cards.  You can see the MCP heat pipe here close up and see that the chip itself is small and runs pretty cool. 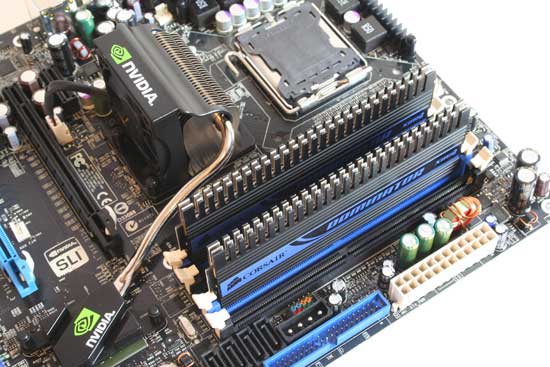 Finally, we have here a shot of the board with two of Corsair’s Dominator modules (the ones used in our testing) installed to again show how clean the board design is.  Even with all these components and expansion slots, the DIMM retention clips do not interfere with the primary GPU at all.

VIA on the VIA / AMD Relationship