Intel is already moving from competitive dual-core processors to quad-core! Kentsfield CPUs are now ready for their launch, with four cores in all their glory.

All the way back in July of this year, Intel officially unveiled their new processor microarchitecture in the form of the Intel Core 2 Duo line of CPUs.  A dramatic shift from the previous series of Pentium 4 and Pentium D processors, the Core 2 line up brought Intel back into the spot light with higher performing and lower power consuming parts than AMD; something they had lacked for some time.  Now, not even five months later, Intel is doubling up on the Conroe core’s success by releasing the first quad-core processor available to the consumer in the Intel Core 2 Extreme QX6700.

Intel’s quad-core processor, known in the tech industry as the Kentsfield core CPU, is very similar in theory to the Pentium D processor that Intel released in Q2 of 2005.  If you remember, the Pentium XE 840 processor was the first dual core to hit the streets as a single die, monolithic processor; that meant that both of the seperate cores were present on each die .  The new Kentsfield processor is nearly the same thing, but here we are looking at a multi-chip processor similar to the Presler core on the Pentium Extreme Edition 955 and 965 CPUs.  There are two pieces of silicon and two execution cores.

This is a diagram of Presler, not Kentsfield, but shows the two die, two chip method of dual core processors

The slide above, taken from an IDF presentation back in March of 2005 and demonstrates the dual-chip architecture style that Kentsfield employs in the first quad-core processors from Intel.  The obvious difference though, is that the cores on the QX6700 Kentsfield CPU are based Intel’s Core Architecture used in the Core 2 Duo line up.

If you haven’t heard about Core 2 Duo, then you just aren’t a hardware junkie like we are here.  This new processor architecture has been making waves as the best CPU for nearly everything from gaming to video encoding the simple multitasking thanks to its native dual-core, Yonah-like design.  I would highly recommend you take a look at my Core 2 Extreme X6800 and Core 2 Duo E6700 review from a few months back to see the performance of these dual core processors.

Kentsfield uses two dies in a single package and each die is a dual core unit, for a total of four cores on the processor.  The reasoning behind using a two-die configuration is really one of engineering and money; its much easier (and thus cheaper) to glue two dies on a single processor package and thus the time to market is lower as well.  Intel is able to beat AMD to the quad-core market because of this as AMD’s designs are monolithic (single die).  Another financial benefit is that having two dies allows Intel to bin their cores produced with a finer grain, putting faster cores on the more expensive processors, theoretically using two dies from different wafers on the same processor.

Kentsfield is built on the same 65nm process technology that the Core 2 Duo uses and thus the transistor count doubles to 582 million or so.  Each core still has 4MB of shared L2 cache for a total of 8MB L2 on the processor; the L2 cache is only shared locally on each core so each pair of cores (one on each die) has access to the other’s memory via very quick access.  However, if one core wants to access data or “talk” to another core on the other die, the communication occurs over the front-side bus as there isn’t any internal communication logic between the two dies.  The FSB between the processor and the chip still runs at 1066 MHz by default as well. 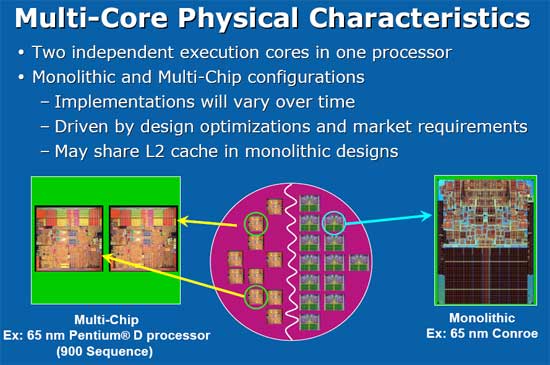 So, as many have said, including AMD, Intel’s Kentsfield processor is two dual core processors “glued together” and seems somewhat un-elegent.  My argument: so what?  Is the performance there?  If so, does it matter what organization the transistors are in underneath the hood?  You can be the judge at the end of this review.