The Abit AB9 Pro motherboard arrived with the 1.4 BIOS, but this version had memory compatibility issues with three different brands of RAM we tested. Abit posted an official 1.5 BIOS that solved the memory issues experienced during our review and we were able to continue testing the board. The newer BIOS also fixed the USB device reboot hang problems that were present. The 1.5 BIOS also includes the benefit of unlocking some additional memory timings as well. We recommend that you update your BIOS if your board comes loaded with a BIOS version earlier than 1.5. 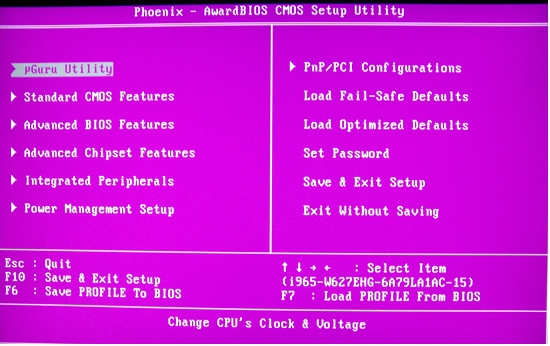 Apparently Abit went with the pink is punk adage here. Beyond the color scheme, the BIOS is very user friendly. Whenever you highlight an item, it gives you a description as shown in the uGuru screen below. 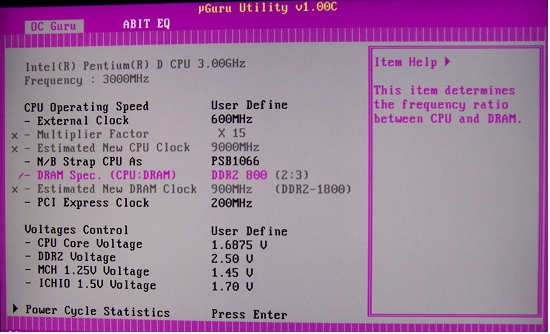 Here we see that adjusting the CPU frequency up to 600 MHz is available. Also included in the menu is the new estimated CPU clock to help guide you to that target overclock. The DDR speed settings are shown here in terms of memory speeds — though really we are seeing memory ratios.  For example, the DDR2-800 MHz setting will set memory at 800 MHz when the FSB is set at 266 MHz, but if you overclock the CPU frequency, then your memory speed will increase as well. PCIe frequencies can be raised to 200 MHz. You would manipulate CPUs with unlocked multipliers from this screen as well.

Memory voltage adjustments are available up to 2.5V, CPU core voltage can be raised to 1.6875V, The MCH voltage can be set up to 1.45V and the ICH8R south bridge voltage goes up to 1.7V. 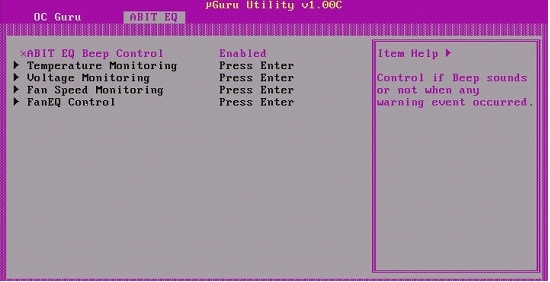 The Abit EQ tab within the uGuru Utility, holds the adjustable monitoring tools of the motherboard. The Abit EQ Beep Control option allows beep warnings via the PC speaker if the set values are exceeded. 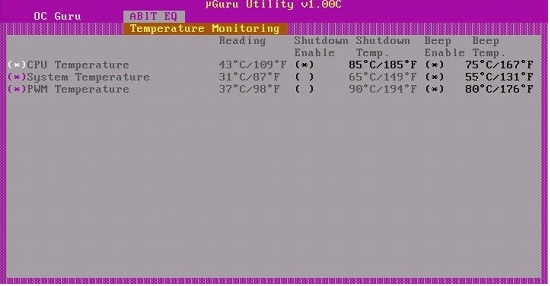 The Temperature monitoring menu shows CPU, System and PWM temperatures and allows you to control shutdown and warning values. 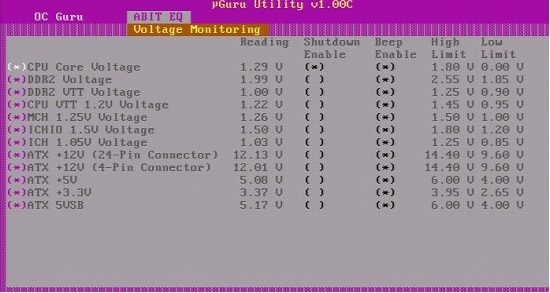 The Voltage Monitoring menu allows you to apply similar warning and shutdown actions for other motherboard components as seen in the above image. 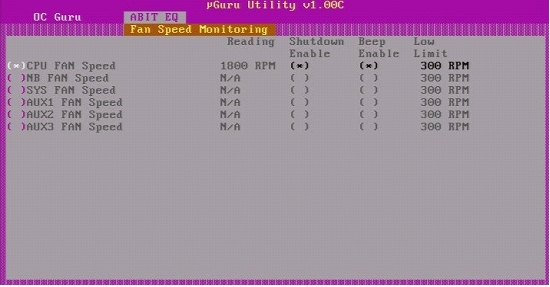 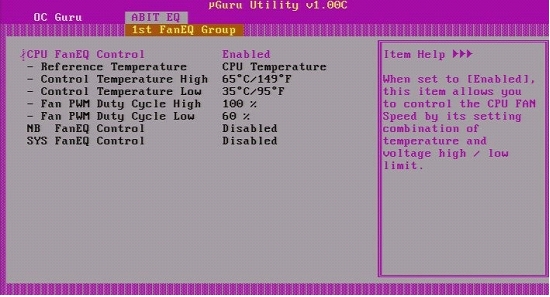 The Fan EQ Control menu contains a series of menus designed for configuration of the systems fans. The BIOS controls the fan speed by throttling the voltage supplied to that fan, based on set values for that fan. This allows your system to stay whisper quiet when not under load, and speed up to control heat while you’re playing your favorite game. The included uGuru software also allows you to configure these settings within Windows as well.