BFG’s 8800 GTS model doesn’t stray from the reference design much, but that isn’t a bad thing as we see in our performance tests of a single card and SLI configuration.

When we first took a look at NVIDIA’s new G80 graphics processor, in the form of the GeForce 8800 GTX, I was more than impressed by the performance that NVIDIA was able to deliver as well as the immediate availability of the GPU and partner cards to the gamers that crave them.  Then, just a few weeks later, I spent some time with a pair of the 8800 GTX cards in SLI mode to see what kind of gaming experience the most powerful GPU setup could deliver.  Again, I was impressed with what I saw, but part of me knew that gamers don’t always have $1200 to drop on graphics cards….wha??

That is where the beauty of the GeForce 8800 GTS card comes in to the spotlight.  Featuring the same Direct X 10 ready GPU design, the 8800 GTS card was supposed to offer outstanding gaming performance for a lower price tag than the GTX flagship.

The 8800 GTS sports a 500 MHz core clock and 1.2 GHz shader processor clock on 96 SPs.  In comparison to the GTX model, which has 128 SPs running at 1.35 GHz and a 575 MHz core clock, the GTS is definitely a step down in speed, but users looking for a price to performance metric in their range are probably still going to be pleased.  The memory system runs at 800 MHz with 640MB of GDDR3; the 8800 GTS features one fewer ROP which converts to a 320-bit wide memory bus.  Just as we saw in the 384-bit wide 768MB configuration on the 8800 GTX, the numbers are a bit odd compared to the usual standards, but in almost all cases, more memory is better.

The card still supports dual dual-link DVI output and HDTV output as well.  HDCP support is included on the GPU as well but the board vendors are required to implement a seperate CryptoROM for full support — luckily for us BFG has included it!

While NVIDIA chose to not supply editors with samples of the 8800 GTS card at launch, there were many partners of NVIDIA that had cards ready for sale immediately.  BFG Tech was one of them and we had them send over a set to us as quickly as they could so we could evaluate the performance of these lower priced competitors. 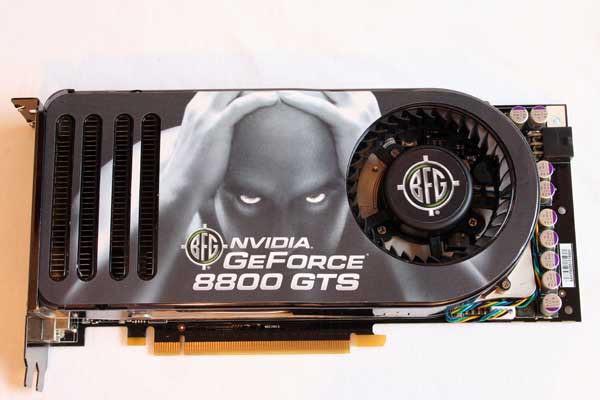 A quick glimpse at the BFG Tech GeForce 8800 GTS card shows a pretty standard looking two-slot GPU cooler with a very worried looking person stuck on to the top of it.  Could it be they are just angry they are ON the card instead of playing on it? 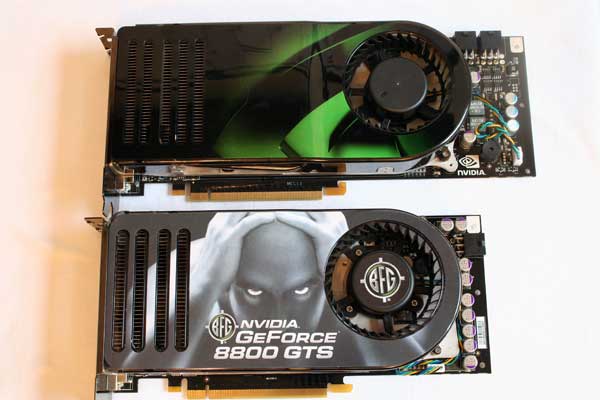 The PCB for the GTS card is much smaller than that used for the 8800 GTX card, shown above it here in the photo.  This means fewer problems with any kind of interference from cases and accessories that you might have heard from other GTX owners. 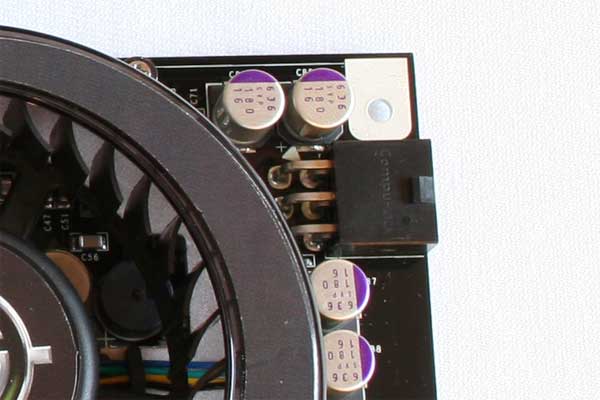 Another advantage the 8800 GTS cards have is that they only require a single PCIe power cable to run properly.  Users looking to setup an SLI configuration using GTX cards were going to have to buy a new PSU that had four such power connectors, but with a GTS SLI setup, you still only need two of them.  BFG recommends a minimum of a 400 watt power supply for a single 8800 GTS system and a 650 watt PSU with 20A or so for the GPUs themselves. 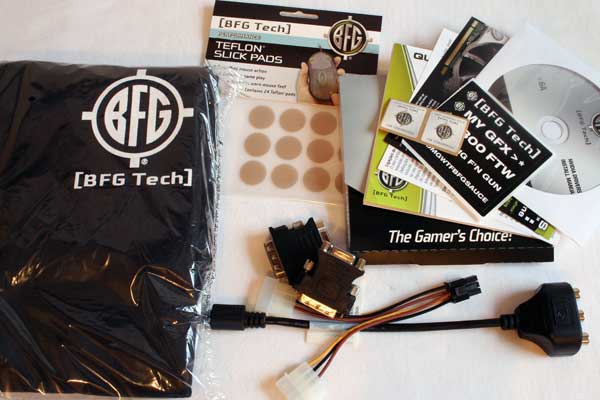 The guys at BFG are dead-set on getting you the best GPU for your money, so you’ll only find extras in here that are actually worth having.  There are two DVI-VGA adaptors, a single molex-to-PCIe power adaptor and an HDTV output dongle.  BFG has included a very nice quality Tshirt and some teflon “slick pads” that aid in mouse movement on nearly any surface.

There’s Plenty of Room at the Bottom