NVIDIA’s PureVideo HD technology attempts to take most of the guess work out of building an HD-DVD and Blu-ray ready system for your home theater or desktop, while offering great playback performance as well.

If there has been one technology through 2006 that has been more hyped up and anticipated than any other, it would definitely be high-definition video and its arrival to consumers as the next big thing in TV, and movie watching.  While HD quality videos have been available for some time online for movie trailers, etc, the use of higher resolution video has been fairly slow to expand because of the amounts of bandwidth required for high bit-rate movies at 1280×720 or 1920×1080 resolutions.  Coming into the summer of 2006 there were two competing formats for a high-definition video disc format for consumer purchase: Toshiba’s HD-DVD and Sony’s Blu-ray.

Now, this isn’t an editorial that is going to attempt to compare HD-DVD and Blu-ray, or talk about the space advantages of one or the other; instead we are here to look at both HD-DVD and Blu-ray can and do function on the PC in today’s market.  Is the time right to introduce a home theater PC (HTPC) into your home when you see that the set-top box (STB) Blu-ray player from Samsung is retailing at $999?  Can the PC hardware from CPU and GPU manufacturer’s compare with the same visual quality and user experience that the Toshiba and Sony STBs can offer?

We’ll be answering those questions and much more in our look at NVIDIA’s PureVideo HD technology and CyberLink’s PowerDVD HD-DVD Edition software.

What is PureVideo HD?

PureVideo HD is NVIDIA’s marketing term for all the technologies that they have created in order to deal with the complexities of HD video and to increase image quality wherever possible.  NVIDIA includes GPU-based hardware acceleration for decoding HD movie formats, post-processing of HD video for enhanced images, built-in HDCP support at the card level. At the software level you have user-friendly applications as well as seamless integration of all these features into the most popular PC-based DVD playback software.

Nearly two years ago I took a detailed look at the origial version of PureVideo which was created to increase the quality of NVIDIA’s video playback on PC including standard DVDs.  All of those features have been carried over through the years, and improved on, so that NVIDIA’s standard definition video quality is matching or beating the best in the industry.  PureVideo HD though steps into a new world of high-definition video where the file sizes can stetch up to 50GB on a single Blu-ray disc with video encoding bit rates upwards of 40 Mbps!  The processing required for these movies is very high, and in some cases even the top end Intel Core 2 Duo processors can’t keep up with the decoding process, resulting in dropped frames and a disappointed viewer.  Using the power of NVIDIA’s 7-series GPUs though, NVIDIA and its software partners are able to off-load much of the processing and allow the CPU to work on other operating system tasks. 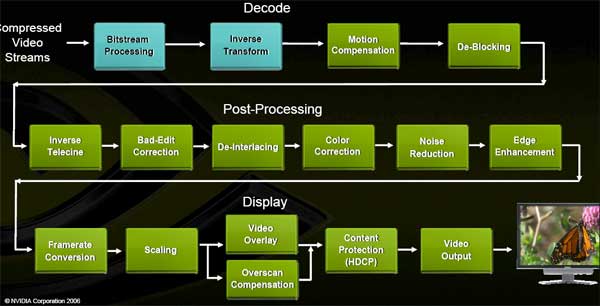 All of this equates to getting a better viewing experience with your HD movies and our tests on the following pages will evaluate how well NVIDIA accomplished it.

NVIDIA has gone one step further with their PureVideo HD program and introduced a “logo process” that attempts to keep users from making bad purchasing choices when looking to buy or build an HTPC.  By looking for an NVIDIA  PureVideo HD logo, user’s can be sure that all of their items will have been tested and approved for use with NVIDIA’s technology.

Video cards with NVIDIA 7- or 8-series GPUs that have HDCP support on them and support H.264, VC-1 and MPEG-2 acceleration will get the logo on the box.  Blu-ray and HD-DVD drives that support AACS (advanced access content system) for movie playback can have the PureVideo HD logo on them as well.  Software such as InterVideo’s WinDVD and CyberLink’s PowerDVD that support Blu-ray and/or HD-DVD and also have built in support for NVIDIA hardaware acceleration will be able to display the logo.  Finally, HDCP ready displays like Dell’s E207WFP 24″ can choose to display NVIDIA’s PureVideo HD logo as well.  For a full system to get approval for the PureVideo logo, it must hit on all of the above mentioned requirements (hardware, software, and display) and NVIDIA also recommends a dual-core CPU with 1GB of system memory.

While all of this might seem a bit confusing at first, NVIDIA’s PureVideo HD logo program is trying to make it easier for the end user.  All you would have to do is go to your local PC store and look for the NVIDIA PureVideo HD logo on a HTPC system or on the components in order to build your own.  Pop on over to your favorite e-tailer and look for a graphics card, monitor, optical drive and software application that all sport the PureVideo HD logo and you’ll be getting components that have been tested and basically guaranteed by NVIDIA.  Installing a set of these components into your own HTPC should basically set you up for all the HD-DVD / Blu-ray action you could ask for.