Testing the Hardware and Software

For our PureVideo HD testing, NVIDIA sent over a pre-built home theater PC in a Silverstone case complete with HD-DVD drive and PowerDVD software. 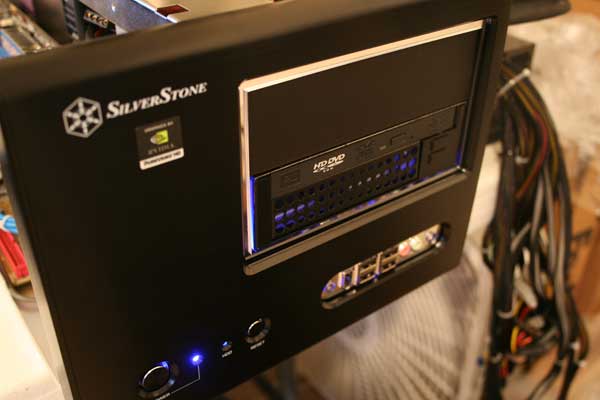 Our test system included an HD-DVD drive, but as you can see here, it is in actually a mobile HD-DVD drive from a notebook, that has been adapted to the standard PC form factor with a venting adaptor. 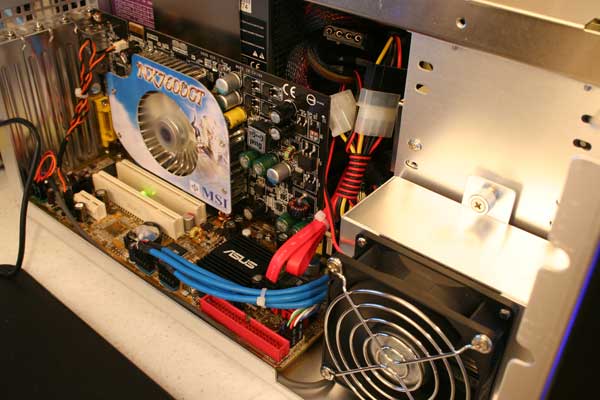 The main focus on the system is obviously the graphics card; here we have a 7600 GT card from MSI that features HDCP support as well as an HDMI connection.  The orange cable that is going from the motherboard to the graphics card brings the sound from the on-board audio so that it can be output via the HDMI port on the video card.  This particular MSI card can be found for about $200 online. 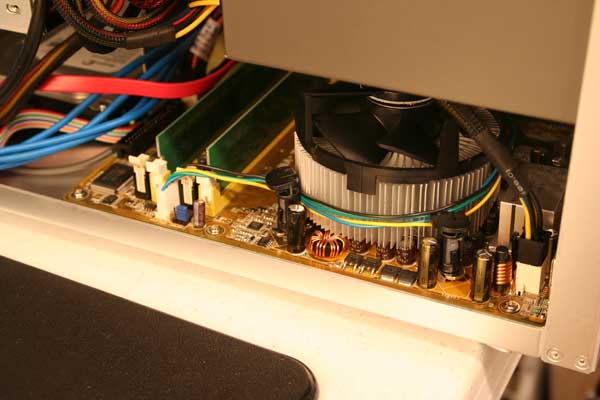 The platform is an Intel 945 chipset based micro-ATX motherboard featuring an Intel Core 2 Duo E6400 processor that runs at 2.13 GHz and can be found online for under $185.  1GB of DDR2 memory are also installed here. 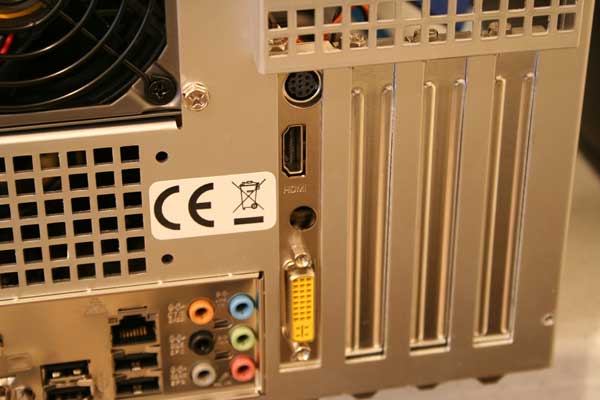 The PureVideo HD software from NVIDIA is built into their NVIDIA Forceware drivers and is mostly transparent to the end user. 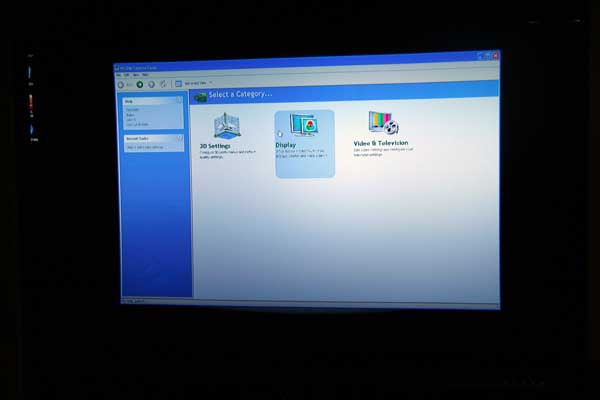 Here you can see the driver setup on my Samsung 1080p DLP; notice the slight overscan problem where the start bar and icons aren’t showing up correctly — this was easily fixed with an in driver wizard. 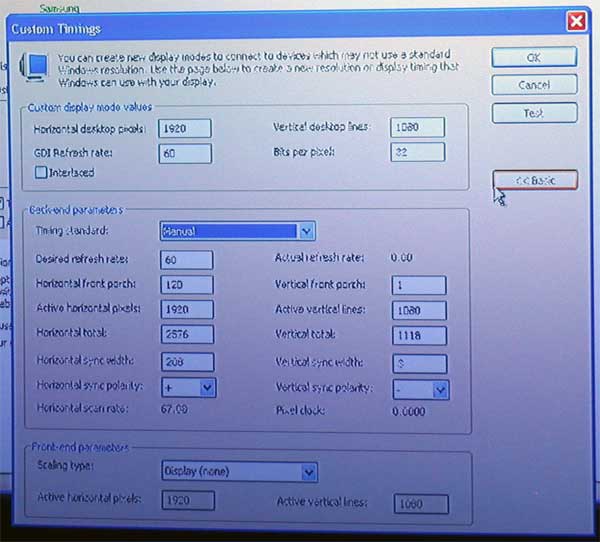 For TV support, the Forceware driver has some very detailed overscan options that if you are an advanced user, you can tweak to your liking, though I mostly left these options unchanged. 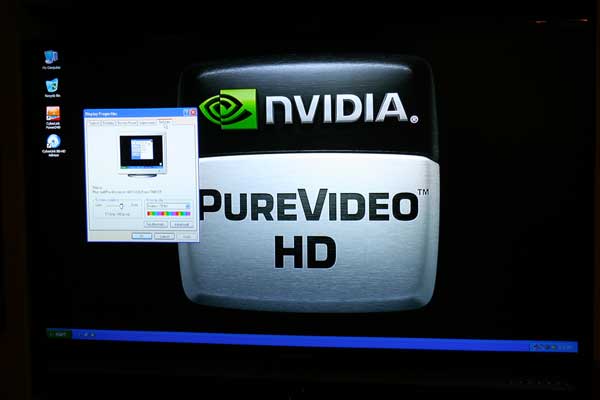 After the driver overscan fix, my resolution was set to 1784×992 in order fit the entire desktop on the screen.

Of course with the HD-DVD drive, HDCP ready GPU and HDCP ready Samsung DLP TV, we still need the playback software that is PureVideo HD ready.  While nothing is available in any kind of retail form yet (more on this later) NVIDIA provided us with a pre-release copy of CyberLink’s PowerDVD HD-DVD version for our testing. 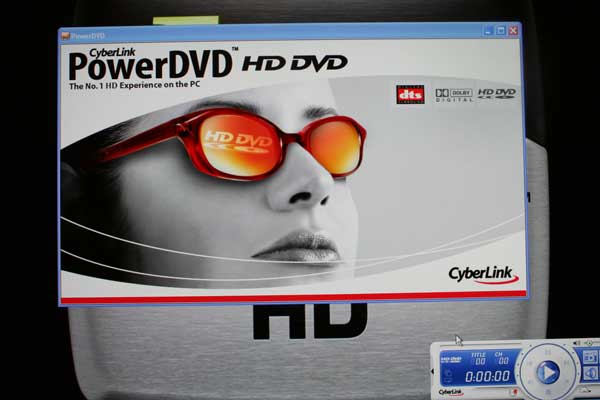 The controls and setup are just like any other copy of PowerDVD, which is a good thing as PC user’s won’t have to learn any new tricks. 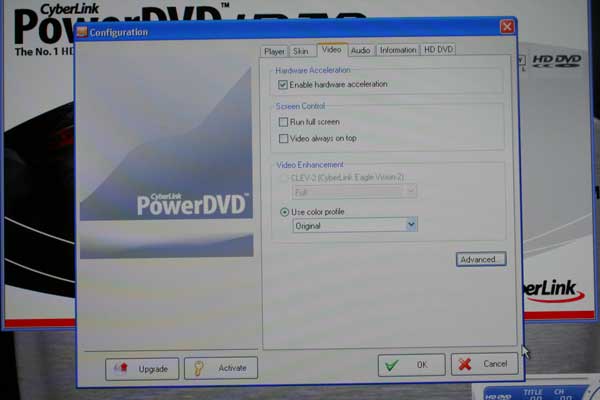 The only setting that you need to be wary of when using HD-DVD or Blu-ray versions of PowerDVD (and probably WinDVD and Nero as well) is the “Hardware Acceleration” box that should be enabled for NVIDIA’s GPU decode accelleration to work.

Update: I have information from CyberLink directly that indicates that the retail version of this software will be available online by Christmas and on store shelves in Q1.  We are almost there!

To aid in testing, NVIDIA sent along a few DVDs, a couple of which were Japanese imports that used the H.264 codec, making them the most processing intensive to playback.  I had quite a few more movies here from my personal collection that were used in my evaluation. 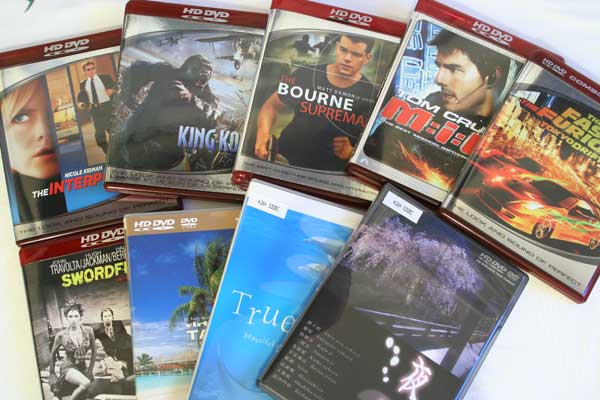 In the middle of the couple of weeks of my testing for this article, “The Interpreter” was released that marked the first US release that used the H.264 codec.