For our first set of tests the Big Typhoon CPU cooler was mounted on an open frame Athlon64 test rig consisting of the components listed below.  The ambient room air temperature was maintained at 23Â°C Â±0.5Â°C and the CPU was loaded by running CPUBurn. 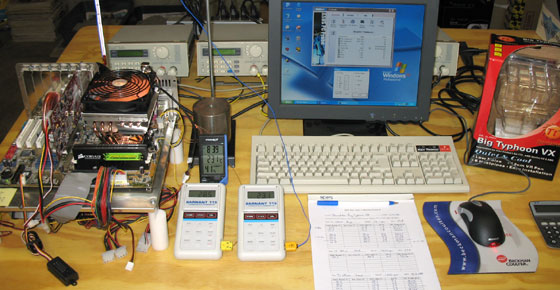 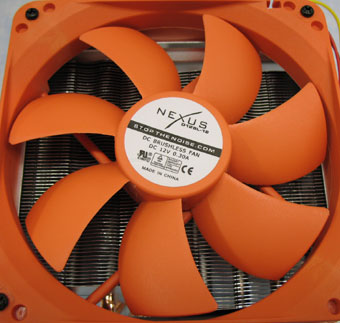 To facilitate taking more accurate CPU temperature measurements a very small Omega thermocouple is attached to the side of the Athlon 64 IHS with Arctic Alumina thermal epoxy.  The measurement equipment used during testing included:

For comparison, I included the results from several other popular HSFs for the K8 platform and the stock OEM aluminum cooler that comes bundled with the Athlon 64 3200+.  All HSFs were tested on the same CPU under the same conditions.

As you can see the Thermaltake Big Typhoon VX CPU heatsink fan did an excellent job of keeping the fully loaded core cool.  It came very close to delivering the same level of cooling performance to noise as the current industry leading Ultra-120 CPU cooler.  When operating at High speed (2,000 rpm) the fan noise was very noticeable.  Using the built-in fan speed controller to reduce the fan rpm quickly reduced the noise and at Low speed (1,250 rpm) it was acceptably quiet and yet still delivered very good cooling performance.  Swapping out the Thermaltake variable speed fan for the virtually silent Nexus 120mm fan still provided very good cooling.

A cool treat for the summer heat