The first wave of nForce 680i motherboards that were released were actually designed by NVIDIA; a new program called “built-by-NVIDIA”, in a similar to a fashion to how graphics cards are sold today.  Asus of course did not follow that same path, and instead their engineers have a custom designed 680i motherboard that retains the feel of Asus’ brand with the performance and overclocking of NVIDIA’s chipset. 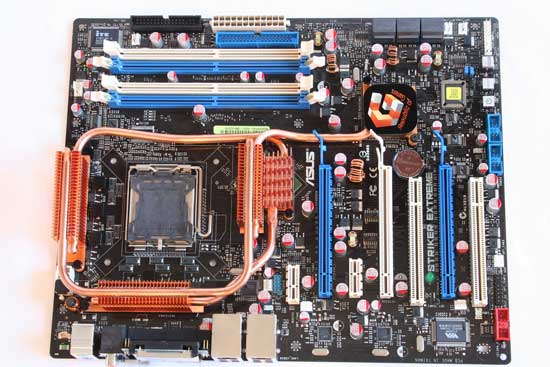 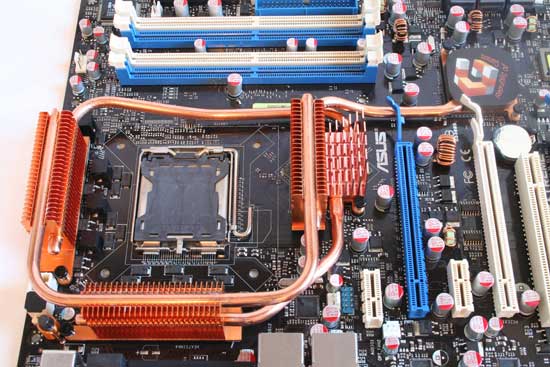 A closer look at the various heat pipes surrounding the CPU socket shows a maze of copper piping.  These heat pipe fin arrangements do require some cooling, but chances are good that your CPU cooling solution will move enough air to double up on that duty.  From this view its important to note that some larger and extensive CPU cooling systems MIGHT cause a problem, though our different standard coolers and water cooling blocks had no problems. 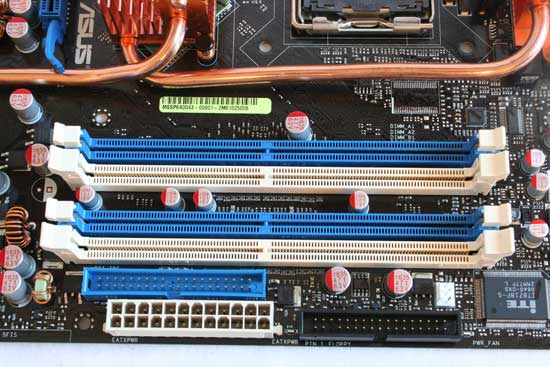 The four DIMM slots that support DDR2-800 speeds (and beyond with some overclocking) are far enough away from the heat pipes to not intefere and are able to hold memory with larger heat sinks as well, including Corsair’s Dominator series.  The single IDE channel, floppy channel and ATX power connection are located here between the DIMM slots and the end of PCB.  These locations allow the IDE cables to stretch up into a taller case and also keeps the cable clutter from the expansion card area too. 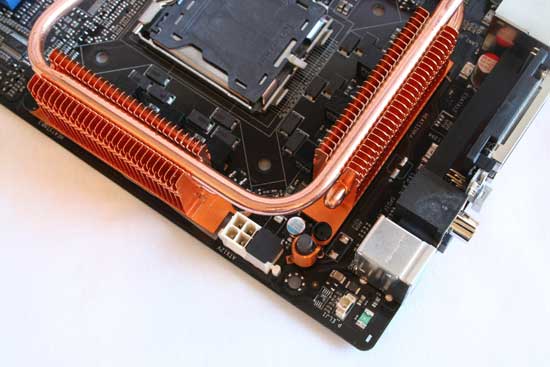 The additional ATX connector for CPU power is located at the top corner of the board, by the external rear connectors.  Unfortunately, the location here is a pain — inserting and removing the power connector requires contact with the heat pipe which could be hot, or at the very best just annoying. 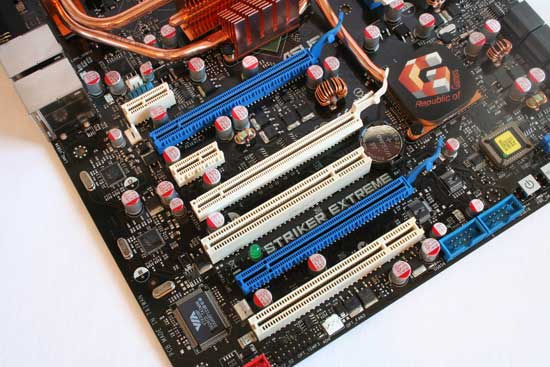 The expansion configuration on the Asus Striker Extreme includes three PCIe x16 slots, two of which are blue to indicate full x16 PCIe bandwidth for SLI support.  The white PCIe slot is a x16 slot though it runs at x8 PCIe speeds only.  Two PCIe and two PCI legacy slots round out the selection of options and even with two graphics cards you’ll have one PCIe x1 and one PCI slot to use for additional items. 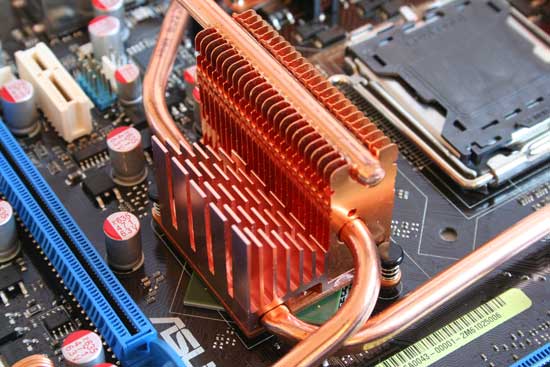 The north bridge of the 680i chipset itself is cooled by both heat pipe configurations — this chip is known to get hot, especially while overclocking. 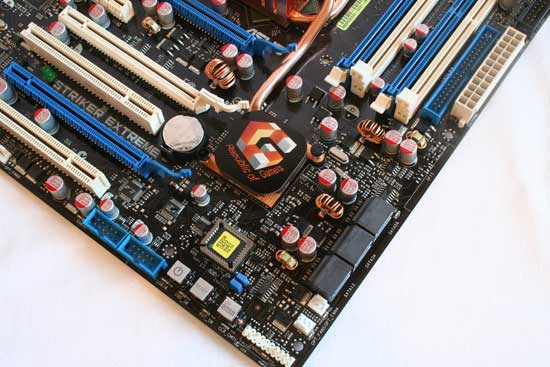 Looking at the bottom of the board, you can see that Asus has included a lot of good features including better SATA connections and power/reset buttons. 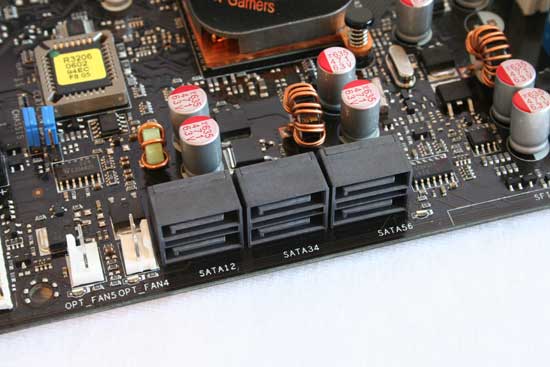 The six SATA channels on the Striker Extreme motherboard are not facing UP from the board, but instead point out the side.  This keeps the SATA cables from interfering with any graphics card or other expansion cards that might be installed in your system.  If you’ll remember, some time ago another motherboard had some UNUSABLE SATA connections when dual graphics cards were actually used; good to see Asus correcting for this issue. 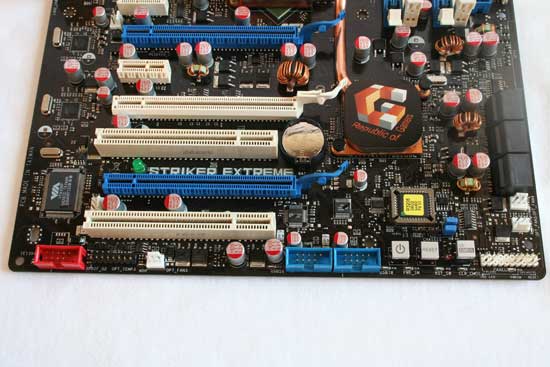 Along the bottom of the board, we find the headers for additional Firewire and USB 2.0 connections, case LED connectors and three buttons made especially for enthusiasts.  Asus has included a power, reset and CMOS clear button that light up and allow tweakers and overclockers to easily work on a system that isn’t yet installed into a chassis. 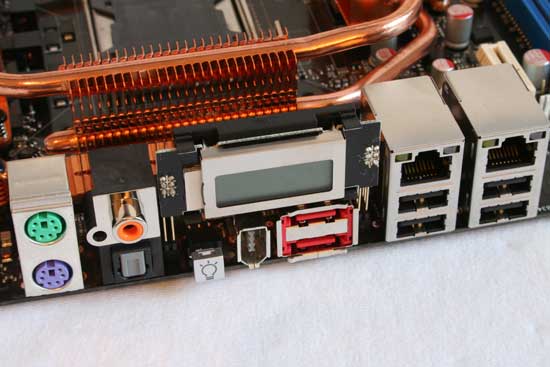 The external connectors on the Asus Striker Extreme motherboard are very similar to those we first saw on the Asus Crosshair motherboard; the first of the Republic of Gamers line.  Besides the fancy LCD screen, Asus has included both coaxial and optical audio output, two external SATA connections, dual Gigabit Ethernet, four USB 2.0 and one FireWire connection. 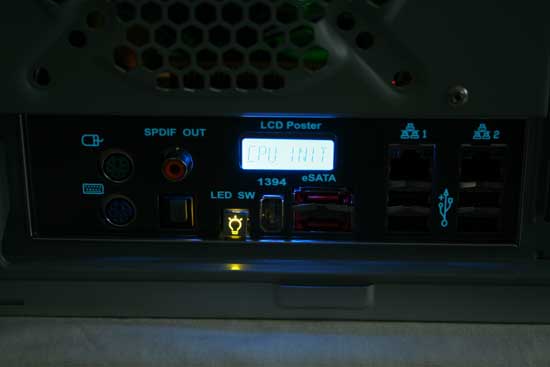 Here is the cool picture that you have been waiting for!  The EL-back panel at work shows the mouse, keyboard, USB and other connection icons are lit up quite well with the lights off in the office.  The bright LCD panel that reports POST errors is showing “CPU INIT” that indicates that we are having a problem with the processor.  (In fact, there isn’t even one installed on the board during this photo!)  The brigher light bulb icon on the back panel is the button that turns the motherboard LEDs on and off. 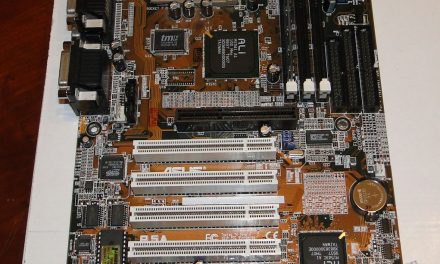