If there was one thing we really liked about the new NVIDIA nForce 680i motherboards, especially those built by NVIDIA, it was the improvement in the BIOS.  With NVIDIA at the helm, the BIOS options were clarified and new overclocking features were introduced.  Asus was going to have their hands full in order to match the competition.

The BIOS on the Asus Striker Extreme is broken up into several different sections: system clocks, FSB and memory, overclocking and voltages.

Starting at the system clocks, here we can set the PCI Express x16 slots frequency. 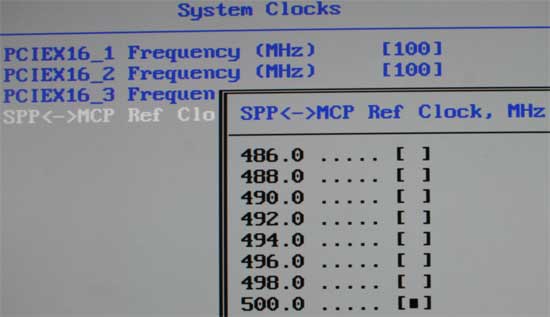 Also, the speed of the HyperTransport bus between the north and south bridge can be raised from 200 MHz up to 500 MHz.

In the FSB and memory menu, we first can set the memory clock mode of “linked” or “unlinked”; linked puts the memory speed in a locked ratio with the processors front-side bus while unlinked allows the memory to run completely independently of the FSB.

In linked mode, you are able to set the FSB to Memory ratio and then the FSB itself, and the BIOS will compute your QDR front-side bus and memory speed for you.

Ratios available to you include 1:1, 5:4, 3:2 and Sync mode that is able to support higher FSB rates and there by increasing overclocking head room.

In the unlinked mode, you can set the FSB and memory speed seperately.

And memory speed settings are available from 400 MHz to 2600 MHz if your memory can handle it. 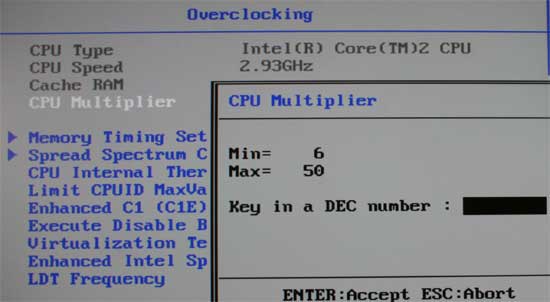 In the overclocking menu, we find the settings for the CPU multiplier, memory timings and more.  Depending on your processors, the CPU multiplier will either be able to be moved DOWN from the default or both up and down if you have a Core 2 Extreme. 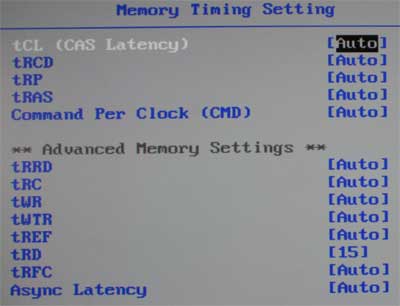 There are lots of memory timings with options here for memory tweakers and Asus differentiates between the major timings like CAS latency and the minor ones below. 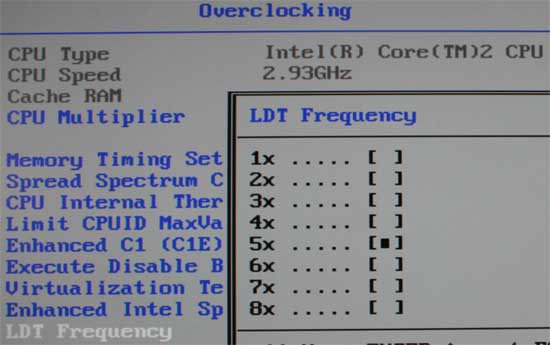 Here you can find the multiplier for the Hyper Tranpsport bus that we set the frequency to in the first menu that controls the data between the north and south bridge chips.