Intel Demos 45nm Up an Running

Intel discussed their upcoming move ot 45nm process technology and the future of the Penryn processor, the Core 2 Duo’s successor.

Just yesterday Intel hosted some press out at their sunny CA offices to show off about their new 45nm production plans.  As it turns out, and as we learned at CES, 45nm is ahead of schedule and is looking very promising for a mid-year release.

During the press briefing, Intel displayed a few things that demonstrated the maturity of their 45nm process this early in the game:

What is most impressive here is that they have the 45nm technology running in a mobile form factor; heat and power must not be a big issue (even in terms of power stability).  The frequency was not shown however in this case.

Intel’s ability to get a first or second generation silicon of 45nm running at 2.13 GHz is more than impressive and getting stability high enough to run something as processing intense as HD video playback adds to it.

One upping even the dual-core setup above, the 45nm quad-core configuraiton (still two dual-cores I assume) running at 1.86 GHz and playing the very CPU intense Rainbox Six: Vegas title was on display.

And maybe most impressive of all, the dual procoessor, quad-core (total of 8 cores!) system running at 2.13 GHz and encoding video in Adoboe Premiere showed off the power these processors provide even this early in the year!

These demos showcase some of the benefits that moving to 45nm will provied to Intel’s Penryn family of processors near the end of this year.

The move from 65nm to 45nm provides Intel with the above tools to work with in order to both improve performance and decrease power consumption.

Along with the typical die shrink alterations in the move to 45nm, Intel is offering more details on the new High-k + Metal gate transistor design that will begin on the 45nm technology. 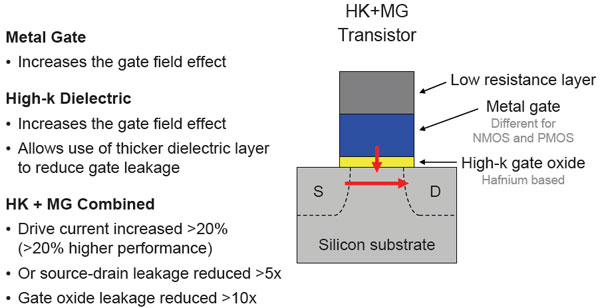 The details are complex but the basic premise is higher frequencies, smaller transistors and higher density while lowering electrical leakage and maintaining a reliable manufacturer process. 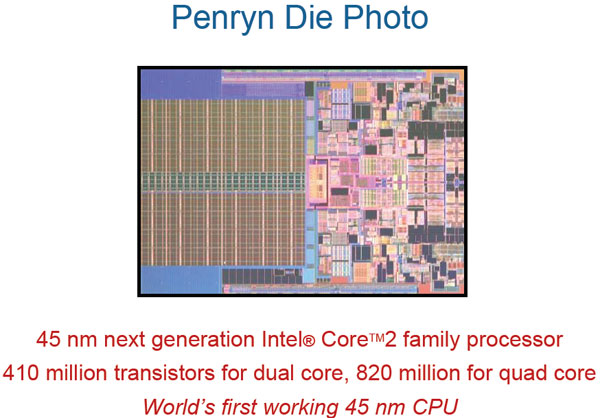 Intel also mentioned that Penryn will have 410 million transistors on a dual core processor compared to the 290 million or so on a Conroe.  The majority of these extra transistors will be in the form of cache though some are for the addition of SSE4 instructions; look for 8MB L2 to be the new standard per core.

The Intel manufacturing division is running ahead of schedule as well with two fabrication facilities in the US operational at 45nm by the end of the year and another in Israel in 2008. 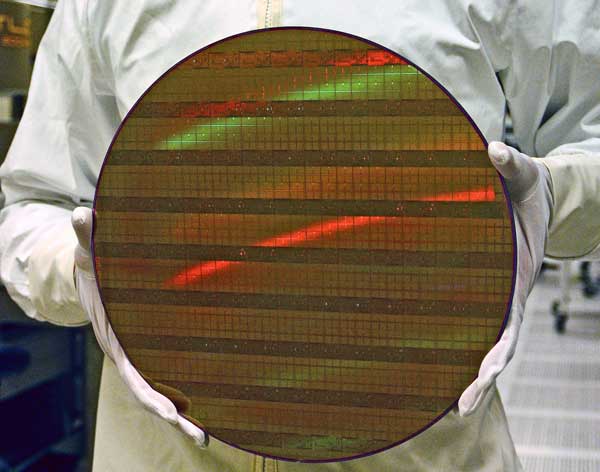 I’ll leave you with this shot of the Intel fab worker holding up what could be the first manufacurered 45nm Penryn processors.

I won’t dive head first into the extreme technical information that Intel provided today but even the non-technical readers should be excited about this news.  A healthy 45nm ramp up for Intel means that performance and performance-per-watt can continue on the upward march we saw with the introduction of the Conroe processor last year.  Intel definitely has the lead in process technology over AMD but hopefully the boys in green will be able to compete and keep things interesting at the end of 2007 and into 2008.

It’s going to be an interesting year!

Note: on the next page I have included a set of slides provided by Intel for anyone looking for more information on the 45nm High-k + Metal gate technology they talked about today.  Enjoy!