The EVGA 8800 GTS 320MB Superclocked uses basically the same amount of power that the standard 640MB version of the 8800 GTS does.

The GeForce 8800 GTS 320MB card is one aimed at a specific gamer segment; one that wants the latest GPU features and support for next-generation titles but not the huge price point that typically goes along with it.

The EVGA GeForce 8800 GTS 320MB Superclocked graphics card takes the reference speeds and just throws them out the window.  The clock rates of 576 MHz core, 1350 MHz shader and 1700 MHz memory are well beyond what NVIDIA set out for the original 8800 GTS line up.  In many cases this overclocked EVGA model is able to outperform the current flagship from ATI, the X1950 XTX, and is also able to put the pressure on its own big brother, the 640MB version of the 8800 GTS.

For gaming at resolutions up to 1600×1200 or 1920×1200, the 320MB version of the 8800 GTS should be more than adequate for playing games with all or most of the eye candy turned up in even the most demanding of today’s games.  There is still the possibility of future games, including the DX10 titles coming later in the year, that could really use the extra memory over 320MB.  But I am fairly confident gamer’s that buy these cards will find acceptable gaming for early DX10 titles.

One area that EVGA has really strived to improve for buyers of their cards is the after-purchase support.  First, EVGA offers a very good lifetime warranty on their video cards as well as 24/7 technical support on the phone and also a great user support forum at their website.  After all the trouble we saw during the GeForce 7900 GTX, EVGA really stepped up to the plate and made sure all of their user’s got the support they needed and addressed the issues.  A great feature for users to go along with EVGA’s lifetime warranty is their Advanced RMA feature that allows for cross-shipping of replacement cards in many cases, minimizing the downtime that gamers will have to endure.

In addition to outstanding support, EVGA also offers a unique “Step Up Program” for its customers that allows them to trade in their EVGA card for a new one within 90 days of the original purchase.  You get the ENTIRE price you paid for the original card in credit towards your new purchase.  Say you bought an EVGA 7900 GS from Newegg.com for $159 and then decided you wanted the new 8800 GTS 320MB card, and it has been less than 90 days since your purchase;  you could then get the new card for the EVGA online price minus the full $159 you paid at Newegg.  Though you can only use the program once, this is an exclusive feature that EVGA offers to its customers on its website and is a great safety net for customers worried about buying a new card right before a new product launch.

As with all of NVIDIA’s graphics card launches in the past year or longer, the GeForce 8800 GTS 320MB card was available immediately after the launch time; and in some cases early.  EVGA is one of the premiere partners of NVIDIA, so their cards were available as of day one allowing the seat-of-the-pants buyer an out for instant gratification. 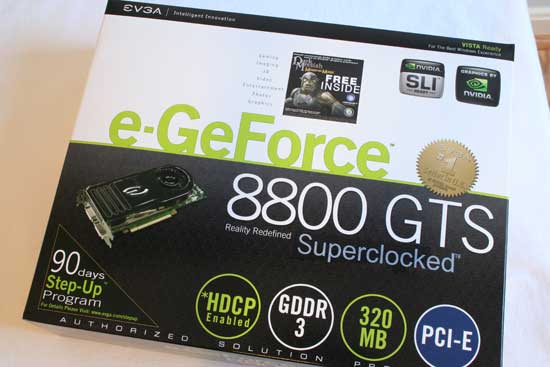 As of this writing, you can find the standard reference clock EVGA 8800 GTS 320MB card for as low as $299 and the Superclocked version, that we reviewed here, for only $20 more at $319.  Newegg also has both cards in stock: standard clock and superclocked.

While these prices definitely bring the DX10 and G80 features to a new price level, the only problem lies in the lowered prices of the 8800 GTS 640MB versions!  As of today, you can find EVGA’s standard clocked 640MB card for as low as $389 and the superclocked 640MB card for as low as $409.  That is a premium of only $90-100 for the additional 320MB of memory; if your budget can survive the stretch, it might be worth it for you to upgrade.

The EVGA GeForce 8800 GTS 320MB Superclocked graphics card is a great performer for gamer’s looking for all of the features of the GeForce 8800-series but with a bit lower price tag.  If you aren’t planning on moving to a 30″ monitor in the near future, the lesser amount of memory on the 8800 GTS 320MB models probably won’t hold you back much and with the extra clock speed you get with the EVGA Superclocked version, you might just find this new card out performing its bigger brothers.  Of the GeForce 8800 GTS 320MB models thus far, the EVGA Superclocked model really impresses with great performance and a fantastic set of support features backing it up!

Be sure to use our price checking engine to find the best prices on the EVGA 8800 GTS 320MB Superclocked, and anything else you may want to buy!