NVIDIA Speaks Out About Vista Support

NVIDIA has been catching a lot of flack for their minimal driver support under the newly released Windows Vista OS. We sat down with the VP of Software Engineering to get some insight on what is causing the delays and what you can expect for future driver revisions.

On January 30th, Microsoft officially released to the general public their latest version of Windows, known throughout its development as “Longhorn” and then officially named Windows Vista.  Vista marks the most dramatic shift in desktop operating systems since the move from Windows 3.1 to Windows 95; a wildly changed software architecture and new security and usability features aim to keep Vista up with user demands.

On launch day though, there were more than a few problems for quick-adopting users.  First, there was a lot of confusion about the new software licensing methods and whether or not enthusiast’s that build PCs for themselves were going to find huge headaches in a move to the Vista OS.  I took a look at these problems and found that most of the concerns were exaggerated, at least for the time being as Microsoft is willing to work with the DIY system builder.

Another issue that arose during our testing was outlined in our Vista Gaming Performance article.  Both ATI and NVIDIA’s first release Vista drivers were not up to par with the performance we have seen on Windows XP, and NVIDIA was much farther behind of the two.  The NVIDIA Forceware 100.54 release that was available on the Vista launch day lacked support for SLI, had a sluggish hi-resolution OpenGL implementation and the HDTV support was basically crippled.

Shortly after the initial release of Vista to the consumer, NVIDIA provided another driver revision: Forceware 100.59.  The following features were added to the software:

However, still missing from the driver is:

Basically, what we have here is a band-aid to help those users that have recently purchased GeForce 8800 cards from one of NVIDIA’s partners with the ‘Vista Ready’ logos on the box.

Obviously there is still a lot missing from 100.59 release and NVIDIA knows this.  Windows Vista has been in development for many, many years and it boggled the mind that NVIDIA would approach the launch of the new operating system without a complete driver ready for its release to the consumer.  And honestly the fact that the OS was available for business use three full months before the consumer release makes NVIDIA’s attempt here appear all the more feeble.  We set out to find some answers to gamers’ and enthusiast’s questions about NVIDIA Vista support.

After hearing our complaints, NVIDIA let us speak with Dwight Diercks, the man ultimately responsible for all the software engineering that goes on at NVIDIA.  Diercks was willing to sit down and talk with me about NVIDIA’s Vista drivers, their preparation for the Vista launch and what we can expect going forward from NVIDIA’s driver team.

First though, Diercks explained some of the difficulties that NVIDIA was having on their Vista driver development.  While reiterating over and over that these are not NVIDIA’s excuses for running behind on their driver development, there is little doubt that most users will see them as just that until NVIDIA gets their software up to the levels expected of them.

One difference between developing SLI for Windows XP was drastically different than it was for Windows Vista is that the NVIDIA hardware and driver could basically work together to make SLI function without letting the OS know what was going on.  This put the entire software stack in NVIDIA’s hand, making it easier to find patches and loop holes to get SLI performance to scale well.  Vista’s dramatically changed graphics driver model will no longer turn a blind eye though, and because of it, the amount of driver development time has increased.

For Windows XP, NVIDIA simply needed to create two main driver components; really two separate drivers.  One for DirectX rendering and one for OpenGL rendering.  With Vista though, things have changed, and NVIDIA now needs to develop six separate drivers.  One for DX9 single card, one for DX9 SLI, one for DX10 single card, one for DX10 SLI, one for OpenGL single card and one for OpenGL SLI modes.  While you might just think the move from Windows XP’s DX9 driver to Windows Vista’s DX9 driver should be an easy port, the move to the new driver model changed all of that.  Microsoft moved the driver stack into the user space in the operating system, effectively making the graphics driver a part of the external OS instead of the OS kernel.  This keeps the kernel much more stable in the long run, but adds another layer of abstraction for NVIDIA’s software to get through before directly accessing the hardware. 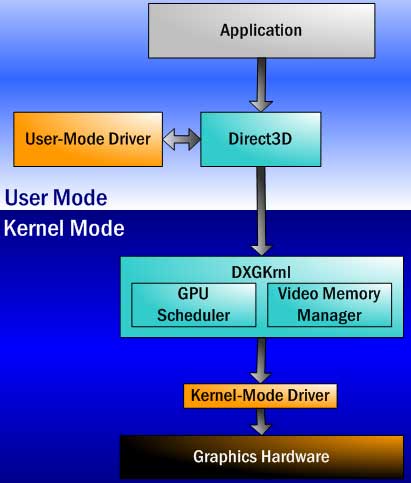 The DirectX 10 driver development has been delayed mainly because of the difficulties in being the first to develop such a piece of software (ATI has no DX10 parts available yet).  When software developers like Crytek use new DX10 features in their code and something doesn’t work right, it can start a long and difficult process to find the culprit.  Is it the developer’s code and implementation of the new DX10 features?  Or is it the NVIDIA driver that is handling the code and executing it incorrectly?  Or is it the NVIDIA DX10 driver interacting with the new driver layer of Vista?  For each issue that arises, the NVIDIA team needs to look at all three options often doing much of the work themselves as part of their ‘The Way It’s Meant to Be Played’ initiative.

Finally, the complexity of these drivers is simply astounding.  Diercks claimed that each of the six drivers that NVIDIA has to develop for Windows Vista is roughly 20 million lines of code long; about as much code as Windows NT 4!  While I am sure there is some significant driver overlap between the six separate modules and the 20 million lines on each, projects of that magnitude are something most normal people couldn’t even begin to wrap their heads around.

For users asking questions about the performance of gaming on Vista versus the performance on Windows XP, Diercks assured me that performance enhancements will continue to be released as the driver team gets more and more comfortable with the Windows Vista driver model.  If you can remember WAY back when Windows XP was first launched, the game performance numbers we saw at the time were less on XP than they were on Windows 98 — the standard gaming platform of the time.  When the coders find some trick that helps performance with one application or specific instance in an application, it can usually help in many other games/areas as well.  The latest Windows XP driver has the benefits of YEARS of these types of driver tweaks while the Vista driver is just starting down that path as millions of users sign up and starting playing with it.

With all that information put aside, we really wanted to know what NVIDIA was willing to tell us about their upcoming driver development plans.  While we know that GeForce 7-series cards currently can’t run SLI under Windows Vista, when will users that shelled out their hard earned dough for this hardware get to put it to use?

NVIDIA told me that they planning to start releasing a new version of their Forceware driver for Vista at least once every month.  I say at least because Diercks said that if they find several game fixes or bugs that are substantial they may have intermittent releases as well to help appease the gaming masses.  This move is very similar to the driver development cycle that ATI’s Catalyst drivers have been in for a couple of years now, with updates about once a month.  Having this type of regular schedule should help NVIDIA users feel more at ease about their purchases knowing that a fixed time length is ahead of them to await another software release that could address whatever issue that ails them.

But what kind of schedule are we looking at now?  While NVIDIA wouldn’t put exact dates to anything quite yet, here is the information I was able to gather about NVIDIA drivers and upcoming feature support.

GeForce users running Vista are currently forced to use crippled software to run their hardware that was touted as “Vista Ready”, both by NVIDIA and their partners, and NVIDIA will be the recipient of a pounding from the press as long as this continues.  While there is no getting around the fact that NVIDIA’s current 100.59 offering is a disappointment for current users, they do have a plan of action in addressing the problems.  This kind of information from NVIDIA’s driver team definitely makes me feel a bit better about the future of NVIDIA’s Vista driver.  Here’s hoping that NVIDIA sticks to their plans and maybe, just maybe, is able to surpass them.

I have started a thread in our forums to discuss this article and NVIDIA’s Vista driver plans, so come in and join the discussion.

For more information on the GeForce 8-series cards or Windows Vista, check out our other articles here:

Be sure to use our price checking engine to find the best prices on the GeForce 8800 series, and anything else you may want to buy!