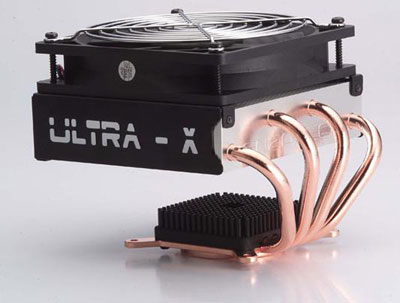 The Ultra-X HSF was tested on a red-hot Pentium 4 EE based test rig consisting of the components listed below.  The ambient room air temperature was maintained at 23Â°C Â±0.5Â°C.  Four instances of CPUBurn were executed at the same time (two to load both physical cores, and two to load the two virtual HyperThreading cores), which resulted in 100% CPU usage. 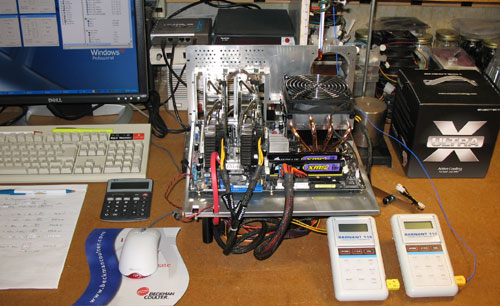 Tests were conducted using the bundled Delta 120mm high speed fan at four different speed settings ranging from 2,600 rpm to 1,200 rpm.  A small Omega thermocouple is attached to the side of the 955 IHS with Arctic Alumina thermal epoxy to provide accurate CPU temperatures.  The measurement equipment used during testing included:

For comparison, I included the results from three other popular HSFs for LGA775 platform.  All HSFs were tested on the same EE 955 CPU under the same conditions.

Note: My original P5N32-SLI Deluxe motherboard died awhile back and the CPU temperature reported by the replacement board is so far off (~20Â°C) its not worth mentioning — the thermocouple attached to the 955 IHS is much more reliable.

The Enzotech Ultra-X did an excellent job of keeping the fully loaded CPU cool — even the red-hot EE 955.  When operating at High speed (2,600 rpm) the fan noise was approaching loud.  Using the included fan speed controller to slow the fan down reduced the noise considerably and at Low speed (1,200 rpm) the cooler was very quiet and still delivered good cooling performance.  This combination offers a lot of flexibility.  Gamers and overclockers who aren’t too worried about noise can opt for maximum cooling while other users can maintain a quiet computing experience and still obtain good cooling. 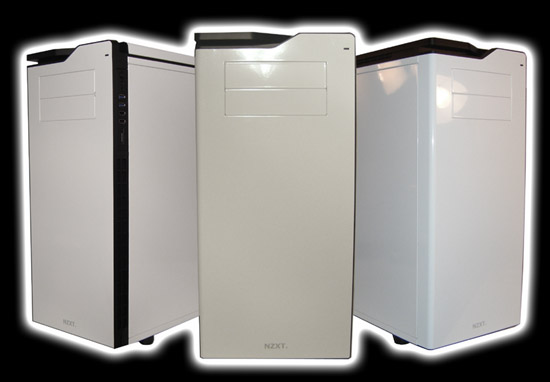