The new 8600 GTS graphics card will bring DX10 support as well as a completely new video processing engine to the mainstream graphics market for the first time. Can the ATI offerings keep in gaming performance though and ruin the party?

It’s hard to believe that is has been 5 months since the release of the first G80 product from NVIDIA, the GeForce 8800 GTX.  With it, NVIDIA brought the world of unified shaders and DX10 support to the enthusiast gamer with flagship cards starting in the $300 price area and going all the way up to $600.  For price points below that though, users have been purchasing GeForce 7-series cards including the 7950 GT and 7900 GS, both of which were released just a couple of short months before the 8800 GTX.

We always knew that NVIDIA would eventually introduce a set of 8-series cards for the lower price points that would offer the DX10 features for more budget-minded gamers, but I don’t think anyone expected to wait this long.  The G84 (8600 GTS) and G86 (8600 GT) cards have been rumored and discussed for several months indicating that NVIDIA had these parts ready and waiting but without an eminent threat from AMD / ATI, they felt no need to divulge the product line.

Today we are seeing the announcement of the full line up including the 8600 series, 8500 and even some OEM-only 8400 and 8300 cards.  And even though the majority of the features are the same on the G8x derivatives, there have been improvements in a couple of key areas.

Right off the bat we should note how NVIDIA’s product offerings are adjusted with today’s announcements.  While not officially end-of-lifed quite yet, only two 7-series cards remain on the official slides from NVIDIA at they are the very lowest priced items you can find.

Starting at the top and working your way down you’ll see a steady decline in pricing with very few gaps in there for users to get lost in.  One noticeable gap in the pricing is something falling in the $200 – 300. This range is typically a “sweet spot” but NVIDIA doesn’t offer anything that falls in the middle of this. On the low end of that range there’s the 8600 GTS cards, and then there’s the 8800 GTS 320MB card at $299.

The 8600 series of GPUs from NVIDIA take the outstanding feature set of the 8800-series of cards and brings them into the price points of the $150-250 graphics cards.  Many users did find that the previous generations 7600-series of cards were the best bang-for-the-buck cards for DX9 and NVIDIA is hoping that consumers will think that about the 8600 cards for DX10 too.

Besides the all-important support for DX10, the 8600 cards also include support for a new PureVideo HD technology, high quality angle-independent filtering and everything else the G80 unified shader architecture has to offer.  There are some sacrifices you make when going from the higher priced cards to the new 8600 GTS or 8600 GT and they are outlined below:

I should note that the G84 and G86 cores are actually new GPU designs; not simply G80 cores that have been cut down and sold as lower priced parts.  The new 8600 GPUs have only 289 million transistors compared to the 681 million on the original 8800 GTX core.  Tweaks were also put into place on the new 8600 core to enabled improved shader performance per clock; for example the texture processors can now calculate eight texture addresses per clock instead of the four addresses that the 8800 is able to calculate, thus providing the ability to sample more unique texture locations in memory.

The new 8600 GTS card features the fastest reference core clock speed of any G80 GPU at 675 MHz.  It can accomplish this because it has many fewer stream processors on-board: 32 of them to be exact.  Those shaders run at 1.45 GHz while the 256MB of GDDR3 memory runs at a quick 1.0 GHz for a total of 32 GB/s of memory bandwidth. 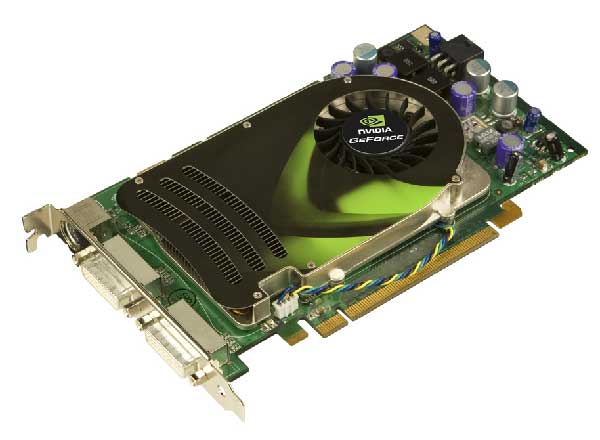 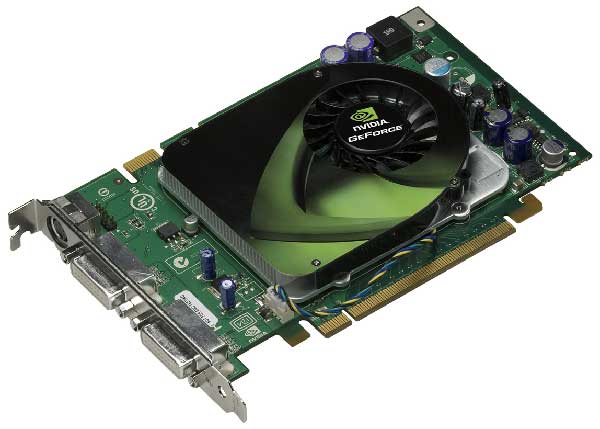 Another GPU released today, though we didn’t get a test sample, is the 8500 GT meant for integrated GPU replacement.  It runs at a core clock of 450 MHz and its 16 stream processors run at 900 MHz.  The memory subsystem is much slower though with DDR2 memory running at 400 MHz for 12.8 GB/s of total bandwidth. 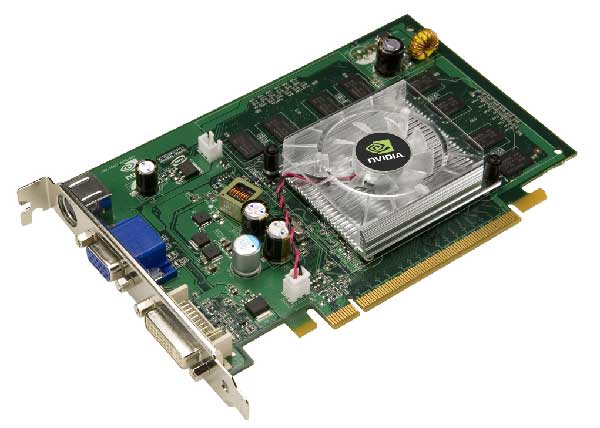 All of these clock speeds and memory speed are up in the air of course, since NVIDIA’s partners like to fiddle with them and sell overclocked versions for a slight premium or just to stand out from the competition.

There have been rumors flying around about an “8800 Ultra” card but nothing on that is being announced today.  But I can tell that if you weren’t going to be paying the $500+ for the GTX, then you shouldn’t bother waiting for an “Ultra” at a better price.

Not only are the 8600 and 8500 cards a new chip design based on the G80 architecture, they also feature a completely new video processor embedded in them for improved performance in off-loading HD video processing.

In this diagram, the GPU on the left represents the GeForce 7-series as well as the current GeForce 8800 cards on the market and use the original PureVideo HD engine.  On the right hand side is the new GPU design that includes a new video processor as well as a BSP (bitstream processor) engine. 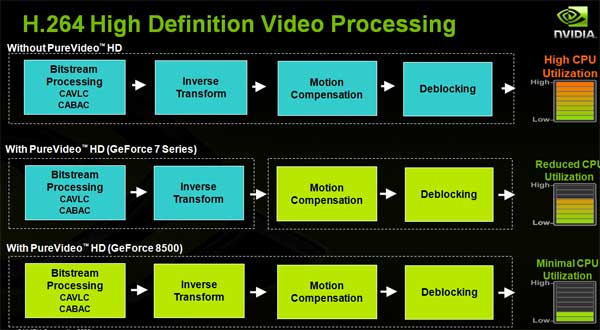 You can see that with the new engine in place, the GeForce 8500/8600 GPUs are able to take on the duties for bitstream processing as well as the inverse transform in HD decoding.  This would free up significant CPU time allowing the system to do more at one time with the same processing power.

I don’t have much more detail on the new VP engine at this time but I have scheduled an appointment with NVIDIA for specifically this purpose to follow up on my previous PureVideo HD article.  Check back soon!