Graphics are quickly becoming the most power hungry component in your system today and that can be somewhat of a cause for alarm as we begin to receive 1200+ watt power supplies in our offices!  How does the new 8600 GTS stand up against its competition? 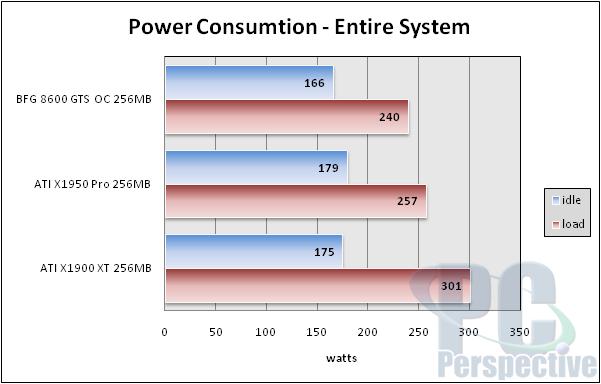 It does quite well — the 8600 GTS draws the least power and both idle and under a full load of the three cards tested here.  The X1950 Pro and the BFG 8600 GTS are in the same envelope but the X1900 XT 256MB card is definitely a step above peaking over 300 watts total on the test bed when it is under full load.

The new NVIDIA GeForce 8600 GTS GPU is a competent product that follows in the tradition of NVIDIA’s existing GeForce 8-series of cards and complete the family of offerings for the first generation of DX10 products.

Looking at current games, the pure performance of the 8600 GTS isn’t as impressive as I thought it might turn out to be.  In only a couple of our benchmarks was it able to best the X1950 Pro 256MB from ATI that has been out since October of last year and it beat the X1900 XT 256MB in even fewer tests.

Games like BF2142, Company of Heroes and even the OpenGL-based Prey have the 8600 GTS coming in last of the three cards in performance, and by a noticeable margin.  Our FEAR and Episode 1 tests also have the NVIDIA 8600 GTS coming in last place but with the stuttering issues I mentioned on those pages, I am hesitant to make any definitive statements until the driver bugs are repaired.

There were a few instances where the 8600 GTS did shine though and it tended to be in the newer titles.  Rainbow Six Vegas performed very well on the 8600 GTS where it was much faster than the X1950 Pro though it still couldn’t muscle past the ATI X1900 XT 256MB.  Supreme Commander and Oblivion also had very good results with the 8600 GTS matching or besting the X1950 Pro in performance.

Overall though, I definitely expected more from the 8600 GTS.  With as much time as NVIDIA had to get these products ready, and because I know there are no hardware issues forcing them from turning these cards up, it boggles the mind why NVIDIA wouldn’t simply dial up the G84 a bit more to get the performance to best its competition.

If there is one reason for NVIDIA’s over-confidence in their product (and not going for the pure performance crown) it’s because of the the features their 8-series offers that the current ATI lineup just can’t match.  The 8600 GTS has decent DX9 performance, but the X1950 Pro and the X1900 XT 256MB do NOT have any support for upcoming DX10 titles and thus the 8600 is a much more future proof product line.  Also, the new video processing engine on the 8600/8500 series of cards is a big improvement over anything that AMD or NVIDIA currently has on the market and that adds some more value to the 8600 GTS card over the competition. 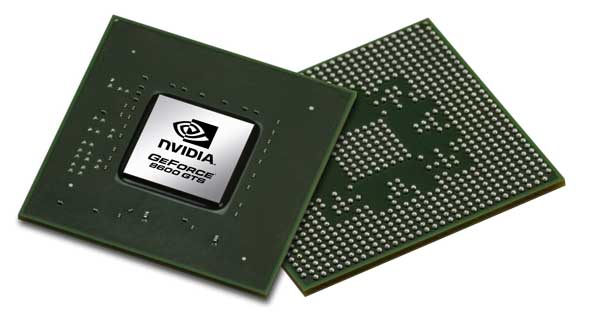 We should also note that the 8600 GTS has some good image quality features that AMD’s products don’t have yet including high quality anisotropic filtering and the new coverage-sampled CSAA.

You’d be hard pressed to argue that even though the 8600 GTS isn’t the performance leader in this price segment, it definitely has the best feature set for any card in the $200 price range.

Our first testing sample of the new NVIDIA GeForce 8600 GTS came from BFG; one of our favorite video card vendors.  BFG’s 8600 GTS OC card offers the great features of the 8600 GTS GPU with an overclocked core adding some extra performance and value to the mix.  Another important reason the BFG cards are high on our list is the fact that BFG has a very strong lifetime warranty that comes with 24/7 tech support based right here in the US.

With the 8600 GTS getting out performed by these cards, the fact that you can get the X1950 Pro for the same price might seem like the no-brainer decision but you also must keep in mind the features and future-use of the card.  Do you plan on keeping it for DX10 play?  What about HD video?  And are you concerned about the upcoming end-of-life for the X1900 series when AMD’s R600 finally hits next month?

The 8600 GTS should be widely available as of today, with the 8600 GT following up by May the 1st.  NVIDIA’s hard launch schedules were remixed when leaks and NDA breaks were becoming a problem so expect future NVIDIA card releases to be a couple of weeks after initial reviews.

These cards are starting to pop up everywhere; I’ll list some here:

I can’t help but feel like NVIDIA was a bit too conservative with the new 8600 GTS graphics cards; had they increased the current DX9 performance enough to out-pace the X1950 Pro in all cases, the decision between the two would have been an easy one to make in favor of NVIDIA.  But because the performance is NOT the top in the price range, they left the door open for AMD / ATI and its partners.  The 8600 GTS is still a great graphics card and with support for DX10, the new NVIDIA video processor and image quality features like CSAA it will find itself into many mid-range gaming systems.

Be sure to use our price checking engine to find the best prices on the EVGA 8800 GTS 320MB Superclocked, and anything else you may want to buy!

The Alphenfohn Peter can cool almost any GPU