Graphics are quickly becoming the most power hungry component in your system today and that can be somewhat of a cause for alarm as we begin to receive 1200+ watt power supplies in our offices!  How does the new 8600 GT stand up against its competition? 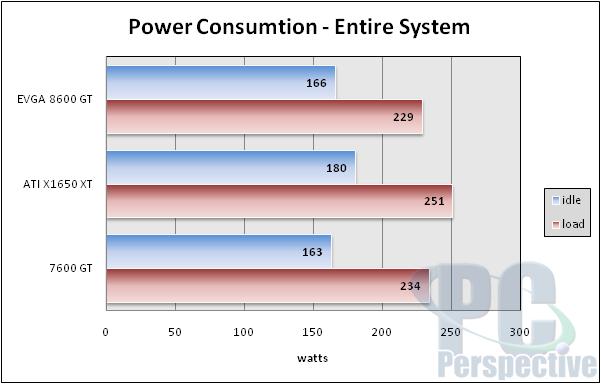 The EVGA GeForce 8600 GT graphics card is a great option for gamers looking at this price point and was able to handle the competition from ATI much better than the 8600 GTS could.

Whereas with the 8600 GTS card I was mostly let down by the overall DX9 gaming performance compared to ATI’s X1950 Pro (the competing product price-wise), the 8600 GT card from EVGA was able to outperform the X1650 XT card from ATI at nearly all the tests.

There are a couple of notable exceptions, including both FEAR and HL2: Episode 1 where a very dramatic driver issue made the games basically unplayable.  I have confirmation from NVIDIA that they have reproduced the bug and are already actively working on the solution and will get a sample driver for me very soon to test out.  Once that issue is ironed out though, I am fairly confident that NVIDIA will be at the same performance level, if not past, of the X1650 XT card. 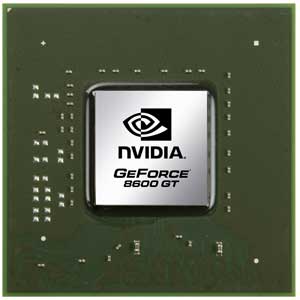 The next-generation titles that are extremely “leading edge” titles like Rainbow Six Vegas saw very substantial performance leads on the 8600 GT over the ATI X1650 XT; the average frame rate was 25% faster at 1280×960 on the NVIDIA card.  Battlefield 2142 did see up to 11% performance gains, 6-8% on Supreme Commander and 20% on Prey.

The only thing that might be a letdown to some on the 8600 GT is that the performance gains over the 7600 GT card (last generation’s mainstream beauty) weren’t as uniform as we’d have liked.  While in some games, like Rainbow Six Vegas and Prey, the performance gaps were very noticeable, other titles like BF2142 and Company of Heroes were only marginally faster.  Of course, there are other benefits on the 8600 GT like DX10 support and simultaneous HDR+AA as we saw in our Oblivion testing.

Another big advantage the NVIDIA’s new 8600 product line offers is a more future-proof platform, if such a thing exists.  With support for DX10 titles, which the ATI X1650 XT and GeForce 7600 GT do NOT have, the 8600 line is going to be able to last gamers quite a bit longer as far as staying on the leading edge of graphics.  Also, the new video processing engine on the 8600/8500 series of cards is a big improvement over anything that AMD or NVIDIA currently has on the market and that adds some more value to the 8600 GTS card over the competition.

We should also note that the 8600 GT has some good image quality features that AMD’s products don’t have yet including high quality anisotropic filtering and the new coverage-sampled CSAA.

The EVGA e-GeForce 8600 GT card is a great option for gamers that like the way the 8600 GT GPU performs and the features it includes.  The EVGA model has overclocked the core from 540 MHz to 576 MHz and the memory clock from 1.18 GHz to 1.50 GHz!  The memory clock in particular is impressive and definitely helps the 8600 GT card make up for the smaller memory bus that it supports (128-bit).

One area that EVGA has really strived to improve for buyers of their cards is the after-purchase support.  First, EVGA offers a very good lifetime warranty on their video cards as well as 24/7 technical support on the phone and also a great user support forum at their website.  After all the trouble we saw during the GeForce 7900 GTX, EVGA really stepped up to the plate and made sure all of their user’s got the support they needed and addressed the issues.  A great feature for users to go along with EVGA’s lifetime warranty is their Advanced RMA feature that allows for cross-shipping of replacement cards in many cases, minimizing the downtime that gamers will have to endure. 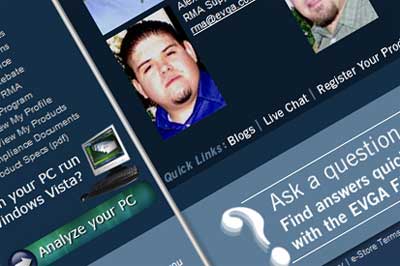 In addition to outstanding support, EVGA also offers a unique “Step Up Program” for its customers that allows them to trade in their EVGA card for a new one within 90 days of the original purchase.  You get the ENTIRE price you paid for the original card in credit towards your new purchase.  Say you bought an EVGA 7900 GS from Newegg.com for $159 and then decided you wanted the new 8800 GTS 320MB card, and it has been less than 90 days since your purchase;  you could then get the new card for the EVGA online price minus the full $159 you paid at Newegg.  Though you can only use the program once, this is an exclusive feature that EVGA offers to its customers on its website and is a great safety net for customers worried about buying a new card right before a new product launch.

According to NVIDIA, the GeForce 8600 GT cards should fall into the $149-159 price range, a good $50 lower (or more) than the 8600 GTS cards we saw last week.  A quick look at the pricing in our real-time pricing engine shows that we can’t get an 8600 GT for anything lower than $154 plus shipping.  That’s relatively close to the price range NVIDIA suggested to its partners, but this EVGA 8600 GT SuperClocked model we tested is priced only as low as $179.  Keeping in mind that EVGA is offering a highly overclocked card as well as a full lifetime warranty on the card, the price increase over MSRP is mostly justifiable.

The EVGA GeForce 8600 GT is a great graphics card for the mainstream market and is able to outperform the competition from AMD’s X1000 line of GPUs while offering more features and image quality enhancements too!  If you are looking for a ~$170 graphics card to play the latest games at decent resolutions and quality settings, I think you’ll be very happy with the performance and support that EVGA’s 8600 GT Superclocked card offers.

The only caveat is the upcoming release of AMD’s R600 series of GPUs; it’s no secret that this is coming in a month or so but what they are going to cover is still a mystery.  This summer is going to very busy at PC Perspective!

Be sure to use our price checking engine to find the best prices on the EVGA 8600 GT 256MB Superclocked, and anything else you may want to buy! 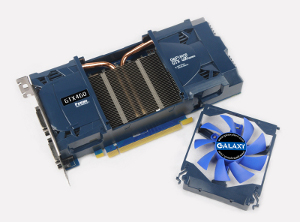