The New nForce 650i Ultra

NVIDIA released a new chipset based on their 600-series for the Intel platform. The new 650i Ultra chipset does not support SLI but has a lot of other interesting features for a ~$120 motherboard.

It would seem to most enthusiasts that there has been a decided lack of new chipsets being released in the past several years for both Intel and AMD platforms.  Intel is still pushing the 975X chipset as their high end option for gamers and power users and AMD’s recent acquisition of ATI’s GPU and chipset segments seems to have stagnated their products with the exception of the recently released AMD 690G chipset for integrated graphics.

The lone exception to this rule has been NVIDIA and their new 500- and 600-series chipsets.  The nForce 590 chipsets AND the newer nForce 680i and 580a chipsets have all been released since the last major chipset release from another vendor.  The nForce 680i SLI chipset for the Intel Core 2 Duo platform was a very good product and has basically had the entire enthusiast community to itself since its release (except where users are staying with Intel’s 975X chipset).  Later, NVIDIA released a revision of the 680i called the 680i LT SLI that dropped a few features in order to offer a lower price but still supported full x16 PCIe channels for SLI.

This newest chipset from NVIDIA aims to take the 600-series features to an even lower price segment including the ~$100 motherboards.  The 650i Ultra chipset has only a single PCIe x16 connection, and thus leaves SLI behind and is only usable or single graphics card configurations.  But the rest of the board is very competitive with the 680i chipsets and I am sure many financially responsible readers will be interested in our results.

The new EVGA nForce 650i Ultra motherboard is a ‘built by NVIDIA’ board just like the recent 680i motherboards and as such implements all the features that the new 650i Ultra chipset has to offer. 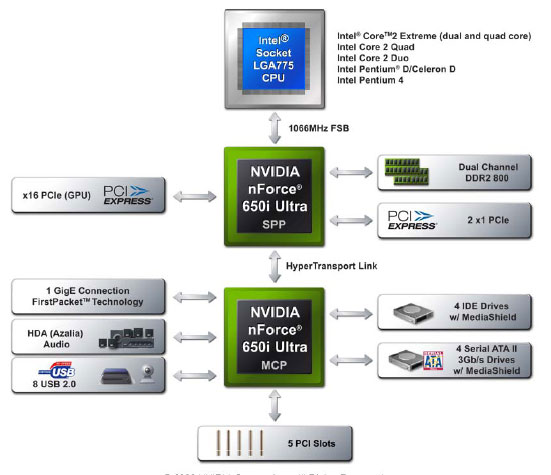 The 650i Ultra continues the two chipset design for the nForce series.  The features are slightly cut back from the 680i series as you would expect, the most notable missing are dual PCIe slots for SLI graphics, SLI Memory support, multiple networking connections and Firewire.  We’ll get more into the features that the 650i Ultra does include and how it compares to the other nForce 600-series chipsets on the following pages.