The extras included in this particular motherboard from EVGA are somewhat slim but cover all the bases for what you’ll need to get your system up and running. 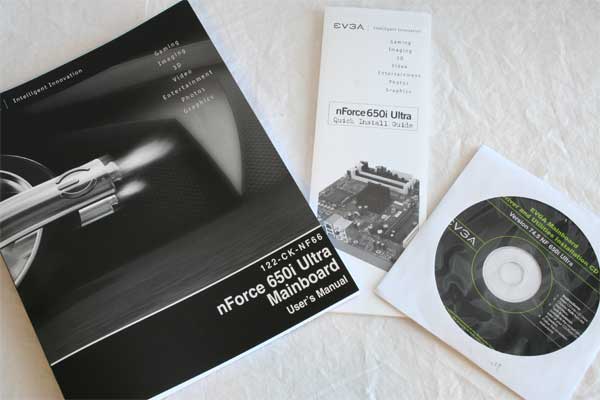 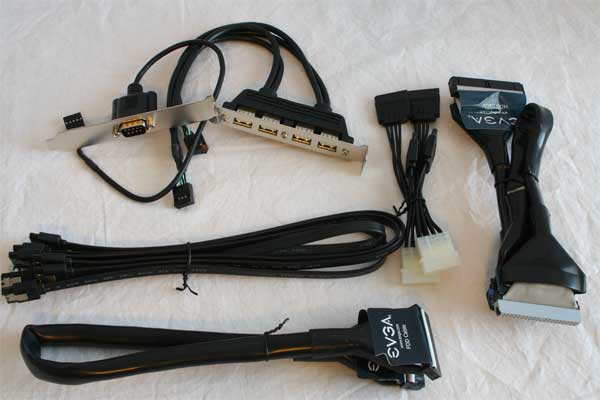 Besides a well written manual (that is native in English!!) and driver CD, the EVGA 650i Ultra motherboard includes dongles for additional USB ports and a serial port.  There is a single floppy and IDE cable, four SATA cables and four SATA power adaptors should you need to populate all the SATA channels on the board.

You’ll notice that in our testing this time around we moved the platform from Windows XP to Windows Vista 64-bit — a move that caused a few problems but better indicates the direction the PC world is moving.  Because of the shift to a new OS, most of the benchmarks we had run in the past are useless and thus our comparison might appear to be a bit odd: the EVGA 650i Ultra motherboard is going up against he likes of AMD’s 690G chipset and the Intel 945G chipset.

While those chipsets aren’t really competing for the same market of users, we wanted to give users SOMETHING to compare our 650i Ultra tests to and these were handy and staring me in the face.  You can expect the performance of the 680i chipsets to be nearly identical for the benchmarks though, as the only place performance might differ is in the overclocking realm.