A Cheaper 680i Solution

NVIDIA has released a new chipset based in the 600 series for the Intel platform that has a lower price but a fewer features as well. Can EVGA and NVIDIA work their magic once again on the new 680i LT SLI chipset motherboard?

The NVIDIA nForce 680i chipset has been well received in the enthusiast community, including here at PC Perspective.  Our initial review of the EVGA 680i motherboard, the first available and the first “built-by-NVIDIA” motherboard to hit the streets, was very positive citing a great motherboard layout and feature set, performance up with the 975X motherboard and loads of overclocking features and ability.  The only downside to the 680i platform was the price level that it was set at: you are still going to have to look hard to find the motherboard for under $250.

Recently though, Asus did come out with a “hybrid chipset” motherboard that supported most of the features of the 680i chipset, including dual x16 PCIe SLI support, but without the 680i motherboard price.  This board is for sale at around $200, a price break to be sure, but still not low enough for the mid-range systems.  You can see my review of the Asus P5N32-E SLI Plus motherboard here if you want to see how a 650i north bridge paired with a 570 SLI south bridge works out.

NVIDIA, sensing the need for a low priced option, has come up with the nForce 680i LT chipset that offers dual x16 PCIe SLI support at a sub-$200 price point.

The nForce 680i LT Chipset

In reality, there isn’t much different in the new NVIDIA nForce 680i LT SLI chipset when compared to the original 680i SLI chipset.  There are a few feature drops that help NVIDIA justify the price decrease; let’s take a look at them. 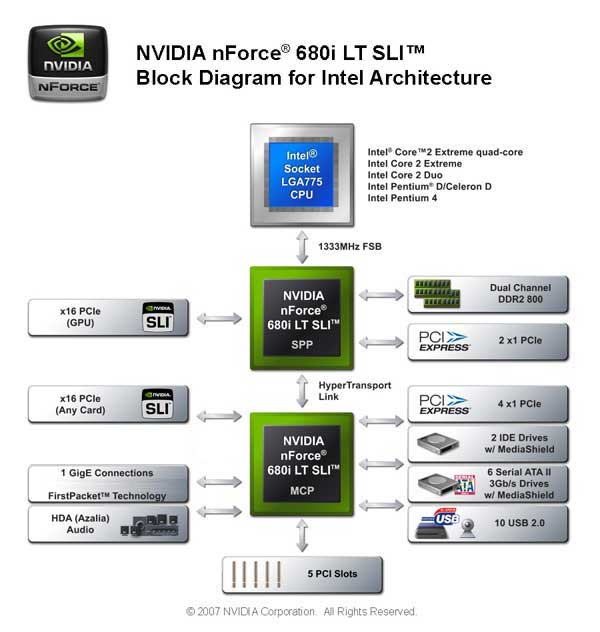 The nForce 680i LT SLI chipset continues to include support for dual x16 PCI Express support for full-speed SLI, one from the north bridge and one from the south bridge.  Both chipsets will support upcoming 1333 MHz FSB processors from Intel when they become available.

The storage capabilities on the 680i LT SLI chipset are still substantial including support for two IDE drives on a single IDE channel and six SATA II 3.0Gb/s channels with NVIDIA MediaShield RAID support.

Major differences include support for DDR2-800 speeds ONLY as opposed to DDR2-1200 on the full priced 680i SLI chipset, support for only one Gigabit Ethernet port and only 8 USB 2.0 ports instead of ten.  The DDR2 speeds isn’t really an issue since you can still push the memory bus up to 1200 MHz and beyond speeds, you’ll just have to do it manually instead of automatically with EPP (extended performance profiles) memory modules.  You also lose the 3rd PCIe x16 PCIe slot for future GPU expansions (like maybe some SLI physics action?).

Intel could have 6-series chipsets ready in Q1 2011