Intel’s largest technology showcase is being held in Beijing this week and the spring 2007 IDF is producing some good news and information. Come in and read about Skulltrail, Intel’s answer to AMD’s QuadFX platform, as well as Larrabee, the project that could turn Intel into a GPU powerhouse. Oh, and Penryn CPUs are benchmarked too!

Usually by this time in the year, you’ll have seen a few articles from me covering one of my favorite shows of the year: the Intel Developer Forum.  Unfortunately for me, this year Intel decided to move the spring show from San Francisco where it was held for years to Beijing in China.  I decided to not make the trip as the expense was pretty high compared to a domestic route, but regardless the event brings a lot of news to the industry.

In this article I’ll try to summarize what Intel has announced and discussed while the rest of us were sleeping.

If you haven’t heard, Penryn is the 45nm transition of the current Core 2 Duo processors and will be released late in 2007.  We recently wrote a couple of pieces on the upcoming 45nm technology that includes details on the new processor.  New features included an L2 cache up to 12MB, support for a 1600 MHz FSB, SSE4 instructions support and improvements to power down technology.

At IDF this week, Intel shared some initial benchmarks on some pre-production Penryn processors in order to give the world a sneak-peek at what’s ahead.  This is very similar to the Conroe processor preview we got at last year’s IDF.

The test system for these upcoming benchmarks is detailed here:

So we are dealing with basically the same platform that we have used in our Intel processor test bed for some time, except this revision of the Intel 975X motherboard supports the upcoming Penryn processor at the 1333 MHz FSB.  You can see that the Penryn processors are running at 3.33 GHz, a good step over the 2.93 GHz on the QX6800 Conroe-based processor so we aren’t going to see what the performance differences of the actual CPU architecture are; instead we’ll see the combination of architecture and clock speed.

Let’s get to the benchmarks!

The quad-core Penryn is definitely a considerable step forward in performance.  The 3DMark06 CPU test sees a 21% increase in score while the overall score has a 7.5% gain.  The Cinebench results show great gains as well in both the existing 9.5 revision and the beta 10 revision: 25% on both.  The sole gaming test is Lost Coast, though we don’t get a resolution or quality settings to lean on.  The frame rate does go up 37% but without more details this test is mostly useless.

Of the two encoding tests, the more impressive is the DivX test that takes advantage of the SSE4 instructions and sees a 211% decrease in encoding time!  The H.264 encoding test is also impressive with a 22% gain in performance. 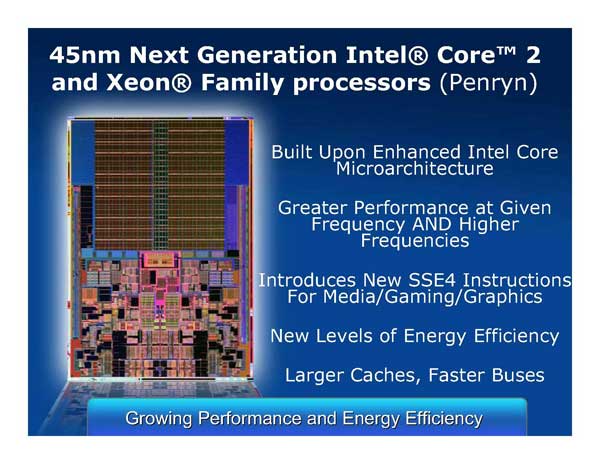 One thing to look at though is the dual-core to quad-core performance gains between the Penryn processors: there are some significant gaps there indicating that more and more software is going to be taking advantage of more than two threads of processing.

The upcoming release of the new “Bearlake” series of chipsets from Intel really isn’t anything incredibly exciting but some new information was released at IDF.  The new 3-series chipsets will be arriving later in this quarter brings an update to the integrated GPU that will support DX10 in hardware and add Intel Clear Video Technology for improved DVD and next-gen DVD playback. 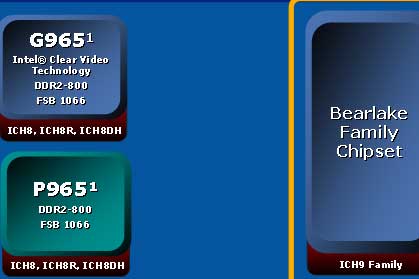 The next Centrino: Santa Rosa

The next-generation of Intel’s Centrino technology is codenamed “Santa Rosa”.  The new specifications call for an Intel Core 2 Duo processor along with the mobile Intel 965 Express chipset and an upcoming next-gen Wireless-N networking connection.  The Intel 82566MM/C Gigabit Ethernet connection is also required but the Turbo Memory technology that will decrease resume time dramatically is an OPTIONAL feature. 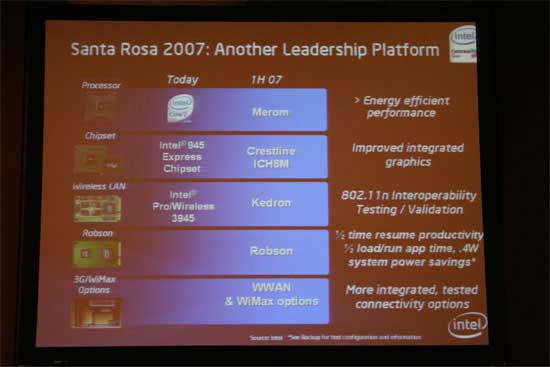 The future for notebook technology from Intel includes a refresh in the first half of 2008 for the new “Penryn” 45nm processor which will add performance and power benefits to the platform.  The “Montevina” processor technology will be added in late 2008 with support for integrated Wi-Fi and WiMAX and will allow for roughly 40% smaller components allowing integration into mini- and sub-notebooks.  Interestingly, Intel claims to be able to include integrated hardware decode for high-def video in this small form factor.

Next Page – UMPCs, Skulltrail and Larrabee 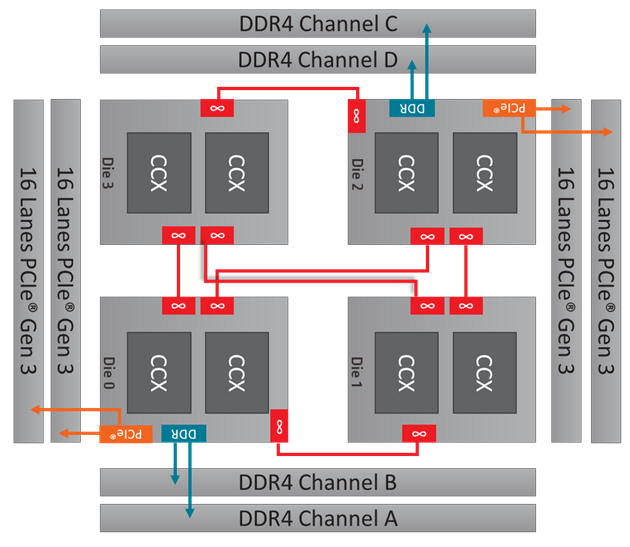