As I mentioned above, our testing was done using the following test bed:

For our testing we ran the same levels both with and without the AGEIA PhysX card installed.  Important!!  You will not be able to do this on the copies that are available for download today but press copies were allowed to manually enable and disable PhysX card support in the menu regardless of whether a card was installed.

I played each level with each card five times for our testing and took the means of for each data set to present them here. 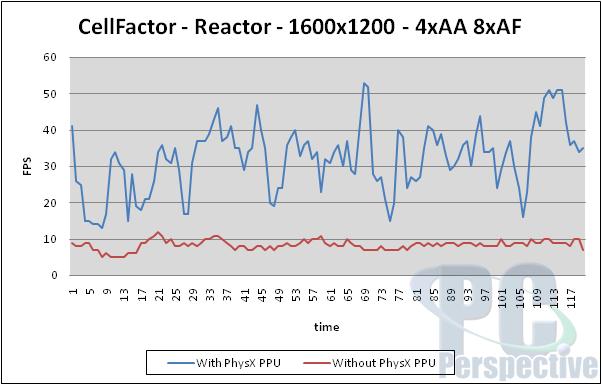 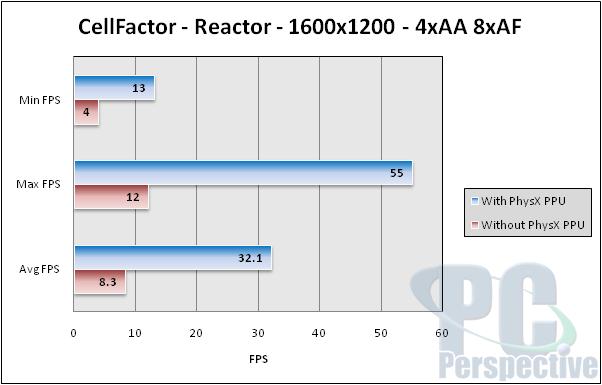 Our first level, “Reactor Processing Core” shows very unplayable frame rates when the PhysX card is NOT installed in the system.  I could play through the levels but my ability to be accurate or even have fun was pretty much zilch, as you would expect with a 9 FPS.  With AGEIA’s PhysX hardware the frame rates were very good bottoming out in the teens but not very often. 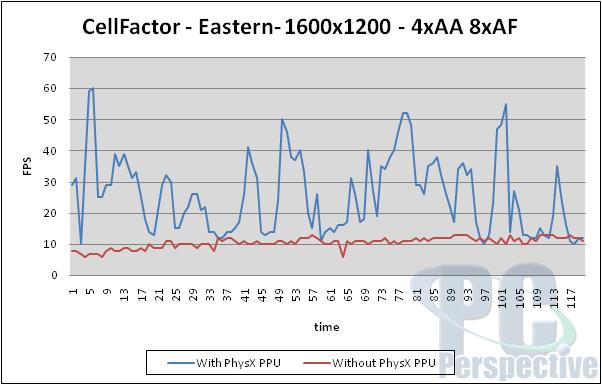 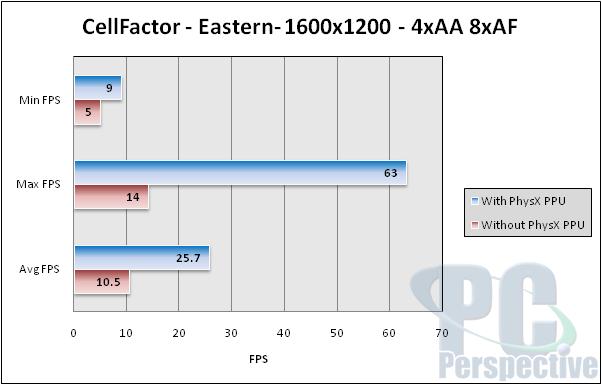 In the second level, “Eastern Weapons System Control”, we see a very similar result though the frame rates with the PhysX card are actually a bit lower.  However, the game is really still only playable with the card and using the CPU only for the physics processing results in an average frame rate of 10 or so.  Bleh.

I was very curious to see how the CPU utilization looked when running the game with and without the PhysX card installed on the system.  Below are a couple of screen shots from the Task Manager in Windows Vista after Alt-tab’ing out from the game.

Ignoring that the CPU usage on the sides reports 10% versus 57% (as the CPU usage dropped right as we were taking the first screenshot) you can see that the CPU usage with the AGEIA PhysX card is pretty evenly split between the two cores but often drops from high usage to low usage as the game progresses.

Looking at the results without the card though and you’ll see a much more stable CPU usage graph that is putting more effort on one core than the other.  The total usage looks to be a bit higher without the PhysX card, but surprisingly it’s not by a HUGE margin here.  Of course this could be because as the CPU is released of physics processing it is able to usage the CPU power to help out the AI and GPU processing, keeping its usage levels higher.

I am not a game reviewer, and I never claim to be one.  I do play a LOT OF GAMES though both for recreation and for work here at PC Perspective and I can tell you that while the new CellFactor: Revolution game is fun; there is a reason they aren’t going to be selling it.  It’s not a polished enough title to warrant a $30 or $40 price tag in reality but what it does do is showcase the AGEIA PhysX hardware extensively.  The CellFactor brand seems built for this purpose (and no doubt it was) and its continued development will give AGEIA a point of contention whenever physics in games are discussed.

I think that AGEIA is hoping that the release of CellFactor: Revolution will put a jump in their PhysX processor card sales but in reality I think the results from it will be limited.  What will boost sales for AGEIA?  First, it’s great to see the prices getting lower than the original $200 MSRP and you can now find them for $150 or so; almost within the reach of a dedicated hardcore gamer.  Next, we need that one, huge retail title to hit the streets that everyone already wants and that can be improved by the PhysX hardware: Unreal Tournament 3 and the Unreal Engine.  For me, this is the key to AGEIA’s success and until we see that buying these cards will continue to be a niche purchase.

Note: The game is now available for download from our friends at Fileshack.com!

Be sure to use our price checking engine to find the best prices on the BFG AGEIA PhysX PPU card, and anything else you may want to buy!