With all the discussion before launch about the power consumption of these new AMD cards, to say we were watching the numbers closely would be a dramatic understatement. 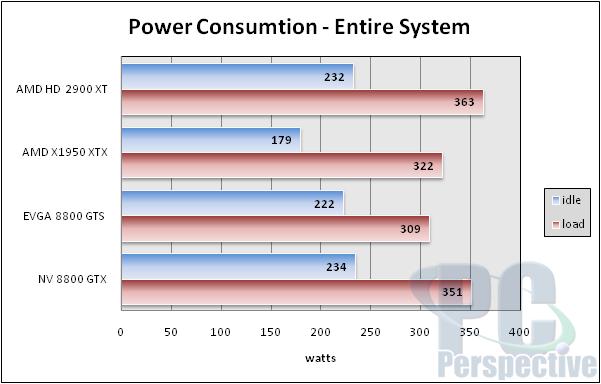 Idle power consumption is pretty standard here and doesn’t exceed the 8800 GTS by much and is actually just under that of the 8800 GTX model.  Power consumption under a load though is a different story – it pulls a full 41 watts more juice than the 8800 GTS 640MB card it is competing against, giving the old “performance per watt” value a clear leaning towards NVIDIA. 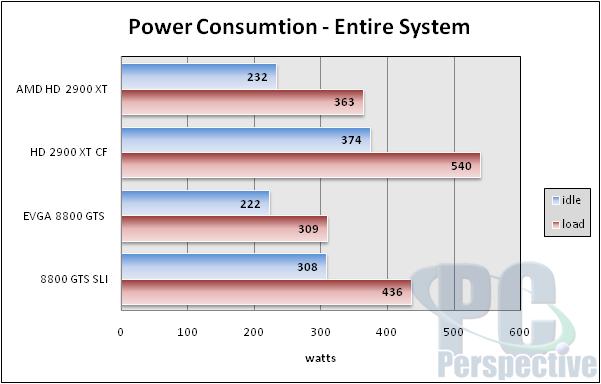 The results for the dual card configurations is even more daunting because that 40 watt difference double up on here as the CrossFire rig pulls 540 watts!  The idle numbers are also VERY high here for the CrossFire setup though I am guessing that is the result of a driver issue keeping one of the cards from idling completely.  We’ll see very soon.

So the new AMD ATI Radeon HD 2900 XT card is here and the results are in — but what do we make of all of this?  AMD is hoping the $399 price tag is going to be the killer point here, but we have our doubts.  The basic architectural design of the R600 seems sound and is a big step forward over the previous X1000 series of graphics cards.  The use of a unified shader architecture puts it on the same level features-wise as the G80 core while the move to a superscalar pipeline might prove to be a small pitfall for their driver and development teams; but that will only be decided as games are released and performance is evaluated further.

When I first heard the price on the HD 2900 XT was going to be set at $399, I was actually really excited and hoped to get a card that was going to blow away all other competition at the price range.  The truth is though that this is the price point that card SHOULD have been at, or maybe lower, as the competing GeForce 8800 GTS 640MB cards can now be found for $350 and under.

That being said, in my testing the new AMD HD 2900 XT performed quite well in our series of DX9 benchmarks.  It was able to outperform NVIDIA on a couple of them, though not by a large margin, and we could pretty much conclude that it and the 8800 GTS 640MB cards are in a performance tie.  That’s not a bad thing at all, and I think the HD 2900 XT will find its way into a lot of enthusiast systems, but the fact that AMD doesn’t have any kind of answer to the 8800 GTX or 8800 Ultra is a bit unsettling. 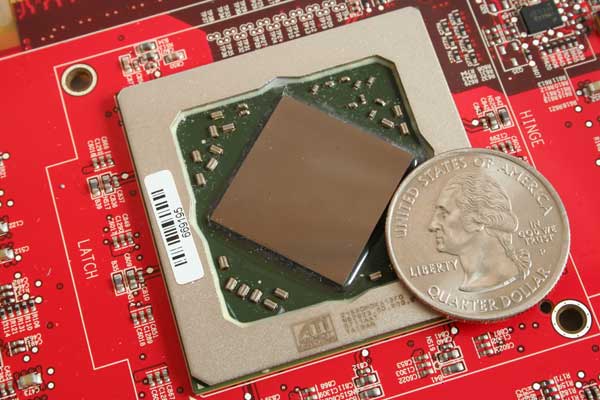 The AMD Radeon HD 2900 XT does do very well with CrossFire this time around and we saw scaling percentages that were pretty impressive on a pair of them.  AMD was even able to outperform NVIDIA’s aged SLI technology for the most part as well since NVIDIA’s SLI support in Vista has a long way to go before it reaches back to the usefulness it saw under Windows XP.

I think it’s pretty obvious why this launch turned out the way it did; I’ll call it the “NetBurst” effect.  AMD designed the R600 some time ago with the hopes of cranking up the clocks and getting performance that would blow the 8800 cards out of the water.  Unfortunately, the power consumption just turned out to be too much for modern day systems to handle under those specifications, and thus AMD was forced to turn performance down to meet reasonable power standards.  Much like Intel did with their Pentium 4 line, AMD is forced to cut the prices on their top card to put it in a different price segment to be competitive.

All hope is not lost though — though the HD 2900 XT pulls an insane amount of power the HD 2600 and HD 2400 power draw is estimated to be an order of magnitude lower.  Running on the 65nm process technology rather than the 80nm that the HD 2900 uses, if AMD can get their ASIC running on that smaller process and get power usage down significantly, the R600 design might be able to scale to the necessary speeds to compete against the NVIDIA flagship cards.

ATI has traditionally done a good job of adding new features to their graphics cards and with the release of the HD 2000 series that continues.  With custom filter anti-aliasing as an option the image quality of the HD 2000 cards has the potential to not only exceed that of the GeForce 8-series but to be increased and expanded on as time progress and the programmable filters are enhanced.  We’ll have to wait a bit to see the results of this work (and our AA quality testing) but I thinking adding this kind of flexibility to the hardware will present golden opportunities for AMD to surpass NVIDIA should they spend the time on it.  Couple that with the move to a higher quality default filtering level and you’ll find the HD 2000 series to offer substantially better image quality over than the X1000 cards did.

The tessellation functions of the R600 are interesting as well and have a lot of potential in them for future gaming and rendering, but in truth I don’t think anything using it will be available to the consumer for quite some time; probably even after the NEXT GPU generation.  So getting a card based on this feature now would be like getting a PhysX card….

We can’t forget the addition of the integrated HDMI support on the HD 2000 series as well as support for audio with an integrated sound controller on the cards.  Adding full-featured HDMI output across the entire line will no doubt increase PC user’s HDMI acceptance but also push NVIDIA to do the same.  The updated Avivo HD technology puts the HD 2900 XT ahead of the 8800 in terms of video capability as the only cards from NVIDIA that offer similar levels of decode acceleration are the GeForce 8600 cards.

While we have already seen it on other ATI cards, seeing CrossFire finally implemented CORRECTLY on the HD 2900 XT is another plus – there are no external dongles and the scaling performance is actually better than NVIDIA’s SLI, at least on Vista.

The real test on these cards will come later this summer and into the fall as the first Direct X 10 titles are finally released.  Some places had tests of Call of Juarez on their benchmark suites for the HD 2900 XT but because the validity of it was called into question I decided to leave it out until the game is finished or we have closer to gold-level code from the developer.  In any event, the results from a single development-stage benchmark aren’t going to tell us much and until the real games reach us, all we can do is speculate.

When DX10 titles arrive, the competition between G80 and R600 will arise again and could turn out very different.

AMD claimed that they would have availability of the Radeon HD 2900 XT today, on launch day, but as of noon EST, I have yet to see a card for sale.  As long as AMD can get some cards in and sold this week, I’ll give them a “pass” rating on the hard launch though the other cards in the HD 2000 series aren’t so lucky.  Sure, they were announced today, but you won’t even get a chance on buying them until the end of June.  So if you are looking to upgrade to a mid-range card I wouldn’t recommend waiting unless you really want to.

The price on the AMD ATI Radeon HD 2900 XT is supposed to be set at $399 — a good price point to hit a lot of gamers.  Unfortunately, despite my initial thought that the card would blow away anything else at this level, it turns out that the HD 2900 XT is just a good competitor to the GeForce 8800 GTS 640MB card that can be found for a similar price point.  I have a feeling that HD 2900 XT prices will quickly descend about $50 to be more price/performance competitive and then the choice could easily be in AMD’s favor.]

Update: The Radeon HD 2900 XTs are showing up for sale!

Even though the AMD Radeon HD 2900 XT is able to compete well with NVIDIA’s GeForce 8800 GTS 640MB card and stay in the same pricing ball park, it’s hard to not be disappointed by the R600 launch overall.  The fact is that AMD built a 700M transistor chip that uses upwards of 225 watts of power and that was considerably late to arrive that was only able to compete with the likes of a cut down version of NVIDIA’s G80 architecture that is more than 6-months its senior.  We’ve already seen that NVIDIA has plenty of headroom on their G80 design; the 8800 Ultra is proof of that, so AMD has an uphill battle if they want to reclaim the crown in the enthusiast market.

For now though, the AMD Radeon HD 2900 XT card can offer a competitive gaming solution at its price point if you can overlook the issue of power consumption and efficiency.