Come take a look at what Intel’s latest chipset offerings bring to the table, what technology moves they make and what is coming down the road this summer.

If you’re a fan of Intel processors, Intel would like to introduce you to a pair of new chipsets today as well.  Through all of the success and failures (but not many) in Intel’s processor development, the one constant has been Intel’s core-logic chipset dominance in their own platform market.  Though companies like VIA, SiS, ULi and most recently NVIDIA have made inroads on the Intel chipsets over the years, none have been able to even peak at the market share Intel owns.

The reasons for it are pretty basic: Intel chipsets have lacked the pizzazz and marketable features that others depend on but what they did have was a penchant for making ridiculously reliable and high performing parts.  After all, who could know Intel’s platform better than Intel?

That being said, the chipset line from Intel has been somewhat stale as of late.  The high-end 975X chipset has been sitting atop their roadmaps since December of 2005 and their 965P chipset release was met with positive but not exciting review.  At Computex this year, coming up in only a couple short weeks, Intel will be officially announcing a new line of chipsets known around the web as ‘Bearlake’ but will now be called the X3x series – including the P35 and G33 we are discussing today.

The Entire Line of Intel Chipsets

In short, the entire desktop chipset lineup from Intel will be seeing a refresh this summer starting with a couple of key chipsets today. 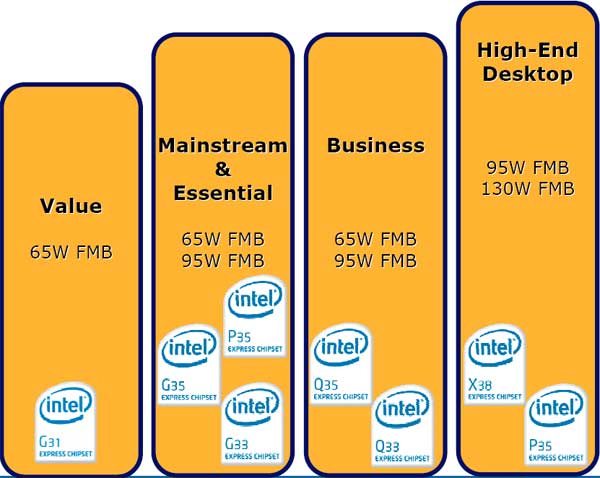 Chipsets ranging from the value markets for processors under 65 watts all the way up to the 130 watt processors in the high-end desktop CPUs will get some new partners.  Though only the P35 and G33 chipsets are being unveiled officially today, you can see in this image that there are several more planned for this year including an updated integrated graphics in the G35 and another new enthusiast part in the X38 chipset. 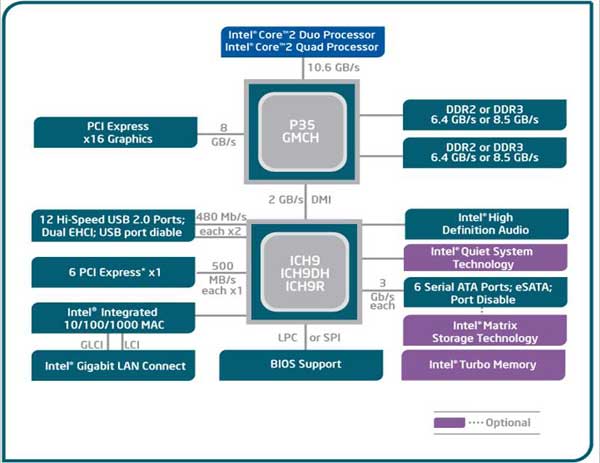 Before we get ahead of ourselves, let’s quickly look at what the new chipsets announced today offer the end user.  First up, the P35, which will find its way into numerous enthusiast level motherboards.  Supporting both current 1066 MHz Core 2 processors as well as the upcoming 1333 MHz bus processors, the front-side bus on the P35 will scale up to 10.6 GB/s of bandwidth.  The north bridge still only supports a single x16 PCIe connection but does get a significant upgrade in the memory department.

The P35 will support BOTH the current DDR2-800 memory standard as well as support for new DDR3-1066 memory.  DDR3 memory still operates at a double data rate, transfering data at both the rising and falling of the clock speed, but DDR3 is specified to scale up to 1600 MHz in the years to come.  While current timings we are seeing on our DDR3 samples include CAS latency numbers of 7, the possibility is there for those to come down (as we’d expect from guys like Corsair and OCZ) and Intel even mentions the DDR3 memory could go as high as 2133 MHz.  DDR3-1333 speeds are not OFFICIALLY supported but the boards we have seen here for testing are working with it fine.

Other changes on the ICH9 south bridge include new Quiet System Technology and even Intel Turbo Memory as optional features the motherboard vendors can implement.  The Quiet System option obviously allows the motherboard to run cooler and thus with less (if any) active cooling while the Turbo Memory feature will allow boards to have on-board flash memory for faster boot times, etc. 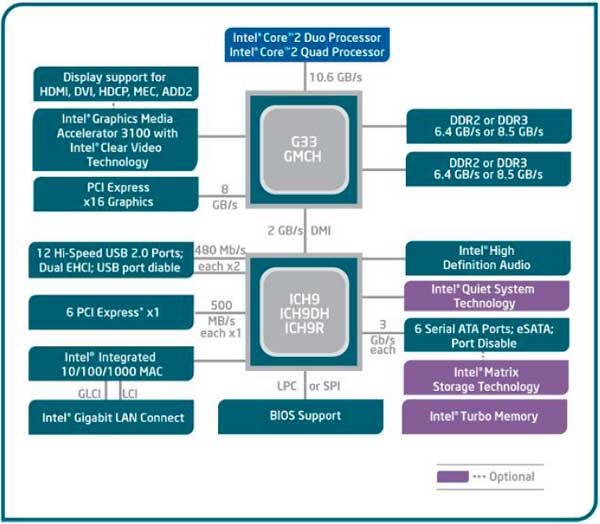 The Intel G33 chipset is also being launched today and has many of the same features: 1333 MHz FSB support, DDR3-1066 memory support, Intel Quiet System and Intel Turbo Memory.  But, as the ‘G’ in the name indicates, the G33 adds the pre-existing integrated graphics core courtesy of Intel’s GPU development team.  The GMA 3100 GPU offers support for HDMI or DVI output with HDCP support as well as software-based DX10 graphics support.

But What Comes Next?

Not too far in the future though we will see two more chipsets launch that really complete Intel’s summer refresh: the G35 and X38 chipsets. 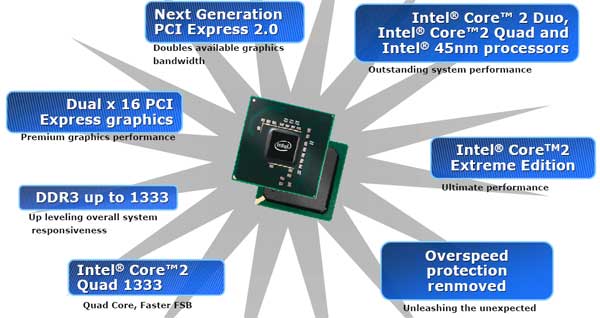 The X38 chipset will offer a few new features over the P35 chipset that is being released today including support for PCI Express 2.0, support for Intel’s upcoming 45nm processors and dual x16 PCIe graphics slots. Additionally, this slide indicates that Intel will be REMOVING the overclocking protection from the chipset and this should allow tweakers to really push Intel’s core logic and CPUs to the limits. 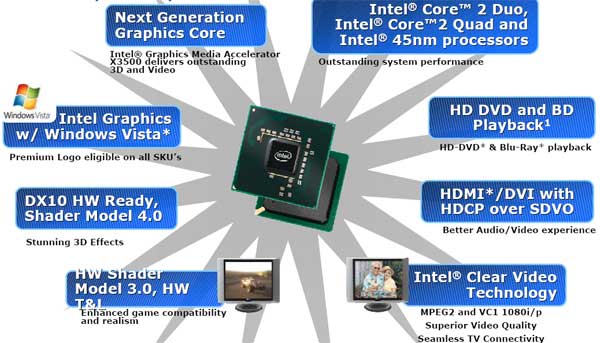 Finally, the G35 chipset will really up the ante with a completely new integrated graphics core dubbed the X3500 that will support DX10 and shader model 4.0 in hardware while allowing for HD-DVD and Blu-ray decode acceleration.

Intel is going to be making a strong push once again into the chipset market with their P35 and G33 chipsets being announced today, though the real product for enthusiasts looking for dual-GPU support on an Intel board are going to want to wait for the X38 chipset later in the year.  If you are going to be building a new Core 2 Duo system in the meantime and don’t mind the single GPU support and want to adopt the new DDR3-memory standard, then the P35 and G33 options look to be excellent products.

Update: Are you ready now to see some motherboards that use the new Intel P35 chipset?  We have four of them on the burner and we take a look at their layouts, features and the performance differences between DDR2 and the new DDR3 memory.

Be sure to use our price checking engine to find the best prices on the Intel P35 motherboards, and anything else you may want to buy!