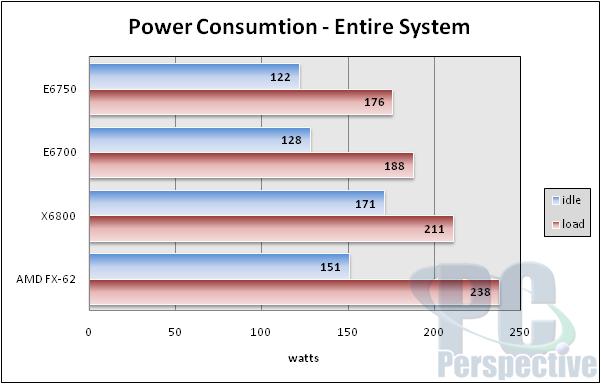 Here’s an interesting side note: the power consumption on the new E6750 processor is actually LOWER than that of our original E6700 processor sample.  This obviously bodes well for future processor headroom as the Core 2 line marches forward.

At its stock speeds, the new Intel Core 2 Duo E6750 processor is a very good performer, though doesn’t bring anything to table that the current 2.66 GHz E6700 processor can’t offer.  In a few our most memory intensive benchmarks the 1333 MHz front-side bus didn’t show off a couple of percentage points of better performance, but there were also a couple that showed the original E6700 was a bit faster.  Final call: a tie in my book. 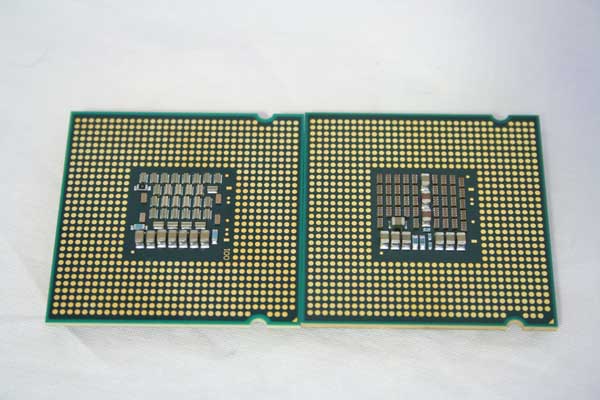 But there is no reason to NOT get one of these new 1333 MHz FSB processors when they are finally available versus the current 1066 MHz FSB parts.  If there have been any CPU die improvements (and we are guessing there were minor ones) then getting the latest revision of hardware just makes sense.

If you want another reason to hold out for the upcoming 1333 MHz FSB processors, our incredibly easy 3.84 GHz overclock should do nicely.  I only had to push the core voltage to 1.5v in order to get the system stable with a 480 MHz front-side bus, a sign that the new Core 2 Duo lineup is going to have a lot of headroom for future product releases from Intel.

Since this not really a launch of a processor, we don’t yet have the pricing scheme from Intel for the E6750 CPU.  Later in the summer, you’ll see an entire line of 1333 MHz FSB processors hitting the streets with availability within 10 days of launch day.  Until then, we sit and wait…

The future of Intel’s Core 2 processor lineup looks strong with examples like the E6750 we have seen today.  While at stock speeds the processor, even with its higher front-side bus speed of 1333 MHz, wasn’t much faster than existing options, the headroom we saw in our overclocking testing surely will appeal to a lot of enthusiasts.  But then who could deny the joy of running a Core 2 Duo CPU at 3.84 GHz?