Intel is now pushing a dual-socket platform with support for two quad-core processors as being the ultimate media creation computer. Does it hit the mark and can the software keep up with 8-cores of processing power?

From the very beginning of my computing fetish the need to have more and more computing power was the draw behind my need to upgrade.  Well, “need” is a relative term, isn’t it?  I can remember dreaming of dual-processor systems and the prestige they would draw and then sitting there wondering what I would do with that extra processor.  In the days of the Slot 1 and Slot A systems, dual processors were nice, but were rarely used by even the most hardcore of PC enthusiasts.

No longer the case; dual-core systems, which are basically the dual-processor systems above but more tightly integrated onto a single chip, are very common and single-core systems are probably the minority in our group of readers.  The quad-core move is now creeping up on us with the adoption of Intel’s Core 2 Quad series picking up as prices will drop to $250 or for the Q6600 CPU in the near future and AMD’s “Agena” and “Barcelona” processors right around the corner.

Now, let’s combine the two: a dual-SOCKET system, loaded with quad-core processors.  Sound good to you?  Intel has been showing off a system dubbed “V8” that features just such a configuration with a total of 8-cores of processing power at the user’s disposal.  What was once relegated only to expensive server platforms can now be yours for just a few thousand dollars.

Following in the tradition of comparing processing to car attributes, the Intel “V8” platform is one in which there are two physical processors, each with four cores for a total of eight processing cores on the system.  It really doesn’t get any easier than that.  The platform itself isn’t really anything new, but its transition to a super-high-end enthusiast PC is: these dual-socket workstation motherboards and systems have been a staple in lines of work like drafting, CAD and graphic design. 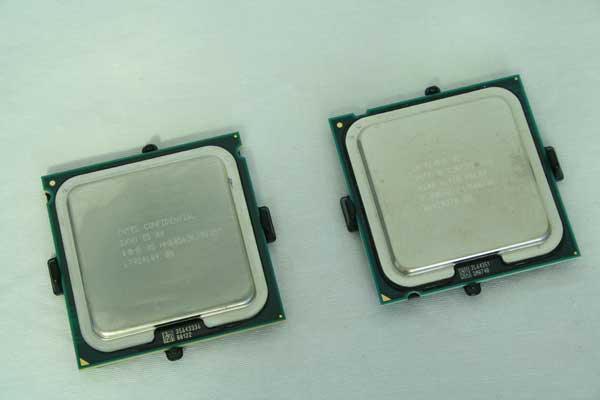 On one side we have an Intel Core 2 Extreme QX6700 processor and on the other we have an Intel Xeon X5365 processor.  Can you tell which is which?  No, me either.  But this is an important sticking point on the V8 platform: it uses Xeon processors and not the standard Core 2 processors currently in use on the desktop platform.  Xeon’s use a slightly different pin configuration (LGA771 instead of LGA775) that is also keyed differently so you can’t install the wrong one either way. 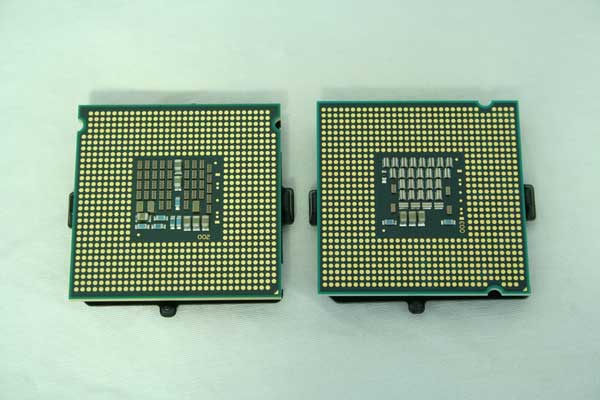 While the move to Xeon processors might seem like a drawback to some, in reality the features on the Xeon should even out any negatives they bring.  First, the Xeon X5365 we are using here in our testing is running at 3.0 GHz on a 1333 MHz FSB: faster than any currently available desktop Core 2 Duo processor.  They also include a total of 8MB of L2 cache for enhanced memory performance. 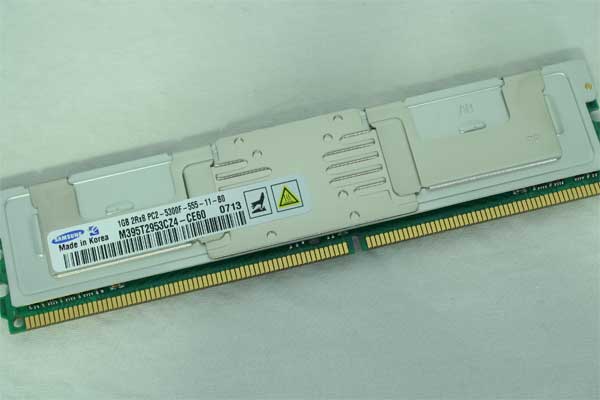 One major drawback of the V8 platform though is the requirement of Fully Buffered DIMMs (FB-DIMM); these are DDR2 modules that run at 667 MHz.  Most desktop chipsets are currently running at DDR2-800 or even DDR2-1066 so these memory modules are probably going to hold back performance quite a bit. 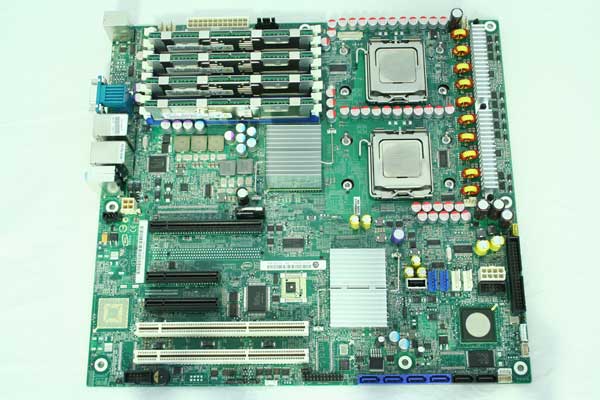 The motherboard that Intel sent along with the V8 platform was the Intel S5000XVN workstation board pictured above.  It supports dual LGA771 processors, front-side bus speeds of 667 MHz, 800 MHz and 1333 MHz, 32GB of total memory at speeds UP to 667 MHz. 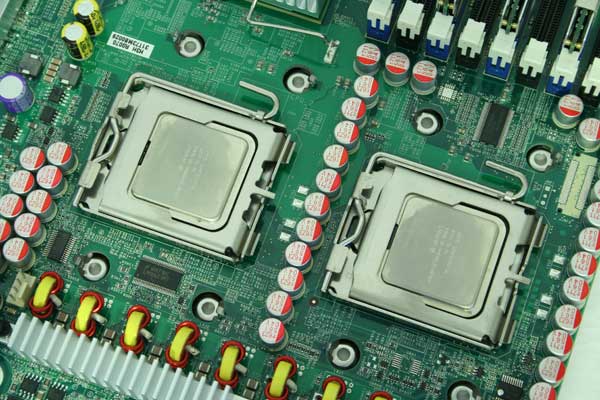 The dual processor sockets use different retention clip mechanism than you would find on a desktop LGA775 motherboard and as such the heatsink / fan combos are going to look quite a bit different. 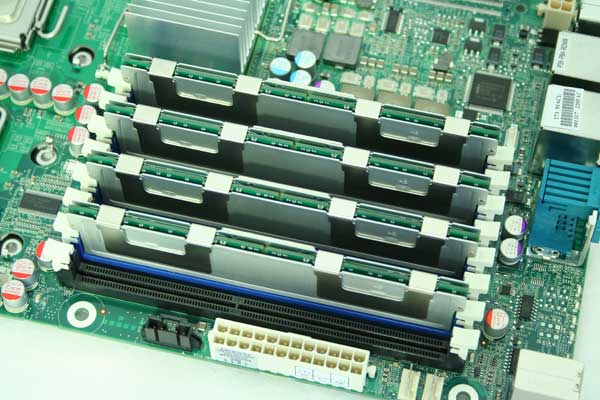 The board features eight DIMM slots in total, and four of them are populated with DDR2-667 FB-DIMMs as pictured here, 1GB each, for 4GB of total system memory. 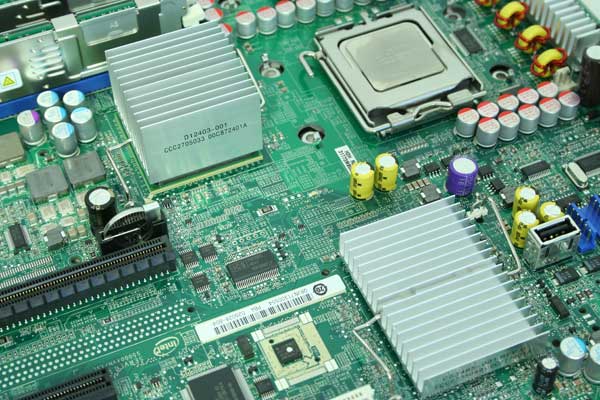 Both the Intel 5000X north bridge and south bridge are covered with only passive heatsinks indicating a strong performance per watt out of this silicon. 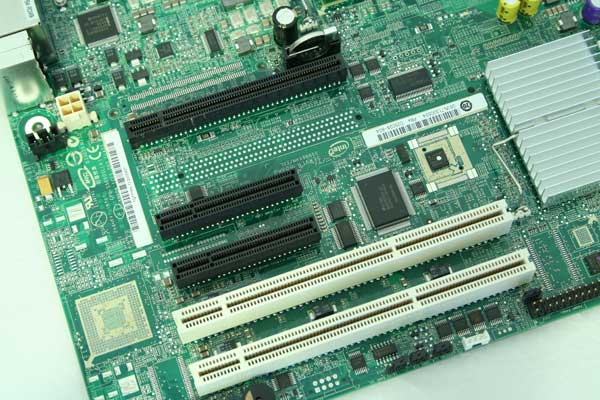 The expansion slot area definitely shows you that it isn’t a desktop motherboard; there is only a single x16 PCIe slot so dual graphics card options are out.  There are two other PCIe slots, both at x8 width and two PCI-X slots.  If aren’t familiar with PCI-X you’d be forgiven; they are general used by the server/workstation world for extremely high I/O connections. 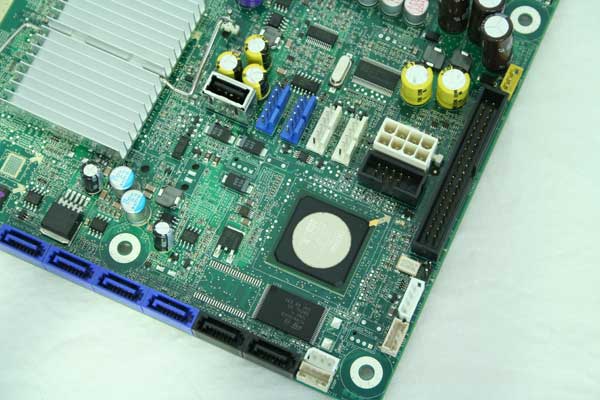 The rest of the features on the motherboard are a mixed bag when it comes to enthusiast class parts.  There are only two SATA channels provided by the south bridge chip itself while four others are provided by an external LSI Logic chip with board attached memory below it.

You’ll also notice on this motherboard that the 8-pin CPU ATX power connector is located WAY down here at the bottom and next to it is a full size USB connection for attaching USB devices internally.  There are numerous other “odd” features on this board that are not found on traditional motherboards you’ve seen reviewed here as well as some notable absent features.  For one, the on-board audio is only two channel and Firewire is missing from the layout.

It’s easy to see that this is NOT an enthusiast motherboard by design; but we’re okay with that as the Intel S5000XVN was designed for a completely different audience.  If you are seriously considering adopting a “V8” system like this though, it’s good to know its limitations.